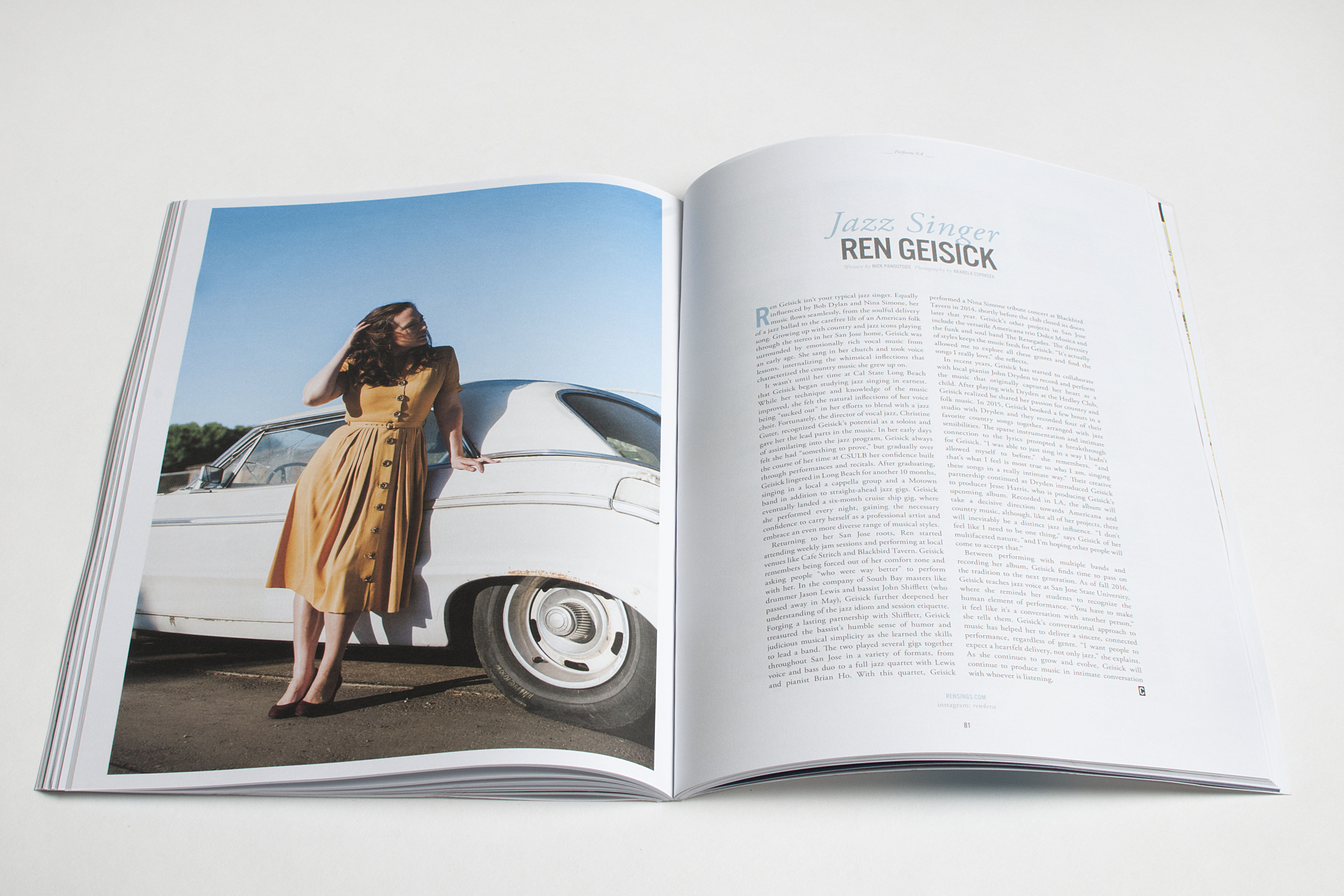 Ren Geisick isn’t a typical jazz singer. Equally influenced by Bob Dylan and Nina Simone, her music flows seamlessly, from the soulful delivery of a jazz ballad to the carefree lilt of an American folk song. Growing up with country and jazz icons playing through the stereo in her San Jose home, Geisick was surrounded by emotionally rich vocal music from an early age. She sang in her church and took voice lessons, internalizing the whimsical inflections that characterized the country music she grew up on.

It wasn’t until her time at Cal State Long Beach that Geisick began studying jazz singing in earnest. While her technique and knowledge of the music improved, she felt the natural inflections of her voice being “sucked out” in her efforts to blend with a jazz choir. Fortunately, the director of vocal jazz, Christine Guter, recognized Geisick’s potential as a soloist and gave her the lead parts in the music. In her early days of assimilating into the jazz program, Geisick always felt she had “something to prove,” but gradually over the course of her time at CSULB, her confidence built through performances and recitals. After graduating, Geisick lingered in Long Beach for another ten months, singing in a local a cappella group and a Motown band in addition to straight-ahead jazz gigs. Geisick eventually landed a six-month cruise ship gig, where she performed every night, gaining the necessary confidence to carry herself as a professional artist and embrace an even more diverse range of musical styles.

Returning to her San Jose roots, Ren started attending weekly jam sessions and performing at local venues like Cafe Stritch and Blackbird Tavern. Geisick remembers being forced out of her comfort zone and asking people “who were way better” to perform with her. In the company of South Bay masters like drummer Jason Lewis and bassist John Shifflett (who passed away in May), Geisick further deepened her understanding of the jazz idiom and session etiquette. Forging a lasting partnership with Shifflett, Geisick treasured the bassist’s humble sense of humor and judicious musical simplicity as she learned the skills to lead a band. The two played several gigs together throughout San Jose in a variety of formats, from voice and bass duo to a full jazz quartet with Lewis and pianist Brian Ho. With this quartet, Geisick performed a Nina Simone tribute concert at Blackbird Tavern in 2014, shortly before the club closed its doors later that year. Geisick’s other projects in San Jose include the versatile Americana trio Dolce Musica and the funk and soul band The Renegades. The diversity of styles keeps the music fresh for Geisick. “It’s actually allowed me to explore all these genres and find the songs I really love,” she reflects.

In recent years, Geisick has started to collaborate with local pianist John Dryden to record and perform the music that originally captured her heart as a child. After playing with Dryden at the Hedley Club, Geisick realized he shared her passion for country and folk music. In 2015, Geisick booked a few hours in a studio with Dryden, and they recorded four of their favorite country songs together, arranged with jazz sensibilities. The sparse instrumentation and intimate connection to the lyrics prompted a breakthrough for Geisick. “I was able to just sing in a way I hadn’t allowed myself to before,” she remembers, “and that’s what I feel is most true to who I am, singing these songs in a really intimate way.” Their creative partnership continued as Dryden introduced Geisick to producer Jesse Harris, who is producing Geisick’s upcoming album. Recorded in LA, the album will take a decisive direction towards Americana and country music, although, like all of her projects, there will inevitably be a distinct jazz influence. “I don’t feel like I need to be one thing,” says Geisick of her multifaceted nature, “and I’m hoping other people will come to accept that.”

Between performing with multiple bands and recording her album, Geisick finds time to pass on the tradition to the next generation. As of fall 2016, Geisick teaches jazz voice at San Jose State University, where she reminds her students to recognize the human element of performance. “You have to make it feel like it’s a conversation with another person,” she tells them. Geisick’s conversational approach to music has helped her to deliver a sincere, connected performance, regardless of genre. “I want people to expect a heartfelt delivery, not only jazz,” she explains. As she continues to grow and evolve, Geisick will continue to produce music in intimate conversation with whoever is listening.