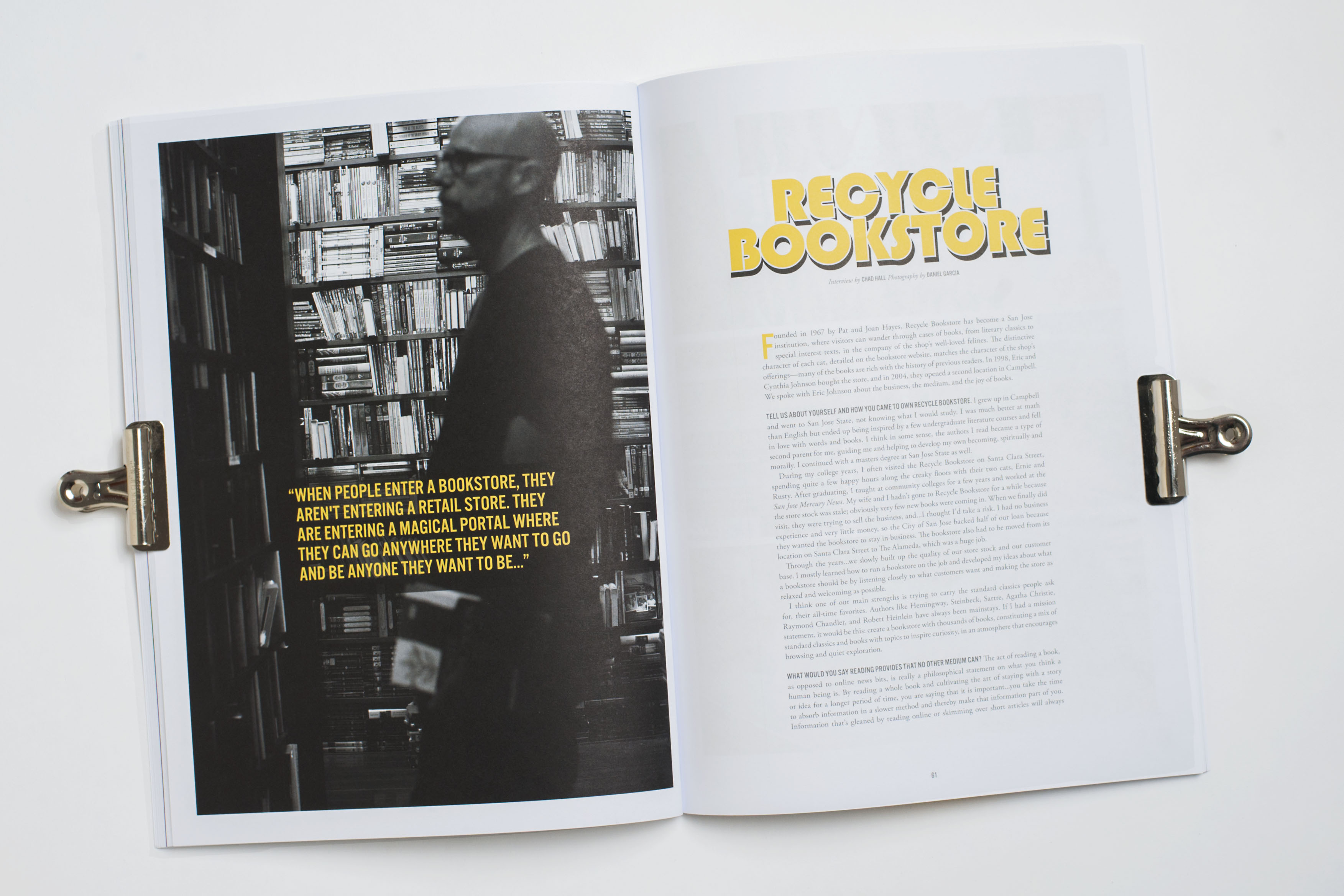 Founded in 1967 by Pat and Joan Hayes, Recycle Bookstore has become a San Jose institution, where visitors can wander through cases of books, from literary classics to special interest texts, in the company of the shop’s well-loved felines. The distinctive character of each cat, detailed on the bookstore website, matches the character of the shop’s offerings—many of the books are rich with the history of previous readers. In 1998, Eric and Cynthia Johnson bought the store, and in 2004, they opened a second location in Campbell.

"When people enter a bookstore, they aren’t entering a retail store, but a magical portal—they can go anywhere they want to go and be anyone they want to be…"

In his own words, Eric’s mission is to “create a bookstore with thousands of books, constituting a mix of standard classics and books with topics to inspire curiosity, in an atmosphere that encourages browsing and quiet exploration.” One technique he has learned over the years to better cater to his customers is stocking plenty of the standards that are requested on a regular basis. Books by Hemingway, Steinbeck, Sartre, Agatha Christie, Raymond Chandler, and Robert Heinlein can always be found on the shelves.

Eric doesn’t seem worried about the idea that bookstores might eventually be replaced with online stores like Amazon. “Bookstores, I think, will always be part of the cultural landscape of cities,” Eric says. “A certain number of people will always gravitate toward a physical place dedicated to the concept that books are gateways to explore ourselves and the world.”

Bookstores also offer satisfaction for curious minds and dreamers. “When people enter a bookstore, they aren’t entering a retail store, but a magical portal—they can go anywhere they want to go and be anyone they want to be: a nebula, the Ottoman Empire, the American Revolution, the beginnings of humankind, their inner selves, far-off lands full of treasure, lands populated by dragons, the quantum world. The choices are almost infinite, which sort of makes bookstores transdimensional spaces.”

The full article originally appeared in Issue 8.1 “Sight and Sound”