Whether they realize it or not, anyone who has been to an outdoor festival in San José in the past 20 years has probably encountered Filco Events, the aptly-named production company headed by Fil Maresca, one of the city's most significant drivers of cultural community events since he moved here in 1989; and one of the original DTSJ pioneers who provided us with the South First Street arts area known as SoFA.

In our conversation, Fil talks about how he ended up in the Bay Area after a car breakdown during a road trip which eventually led him to open the famed FX (currently, The Ritz). And how Filco began to assist local organizations in producing their event including San Josè Jazz Summer Fest, Music in the Park, the SoFA Street Fair, and our Content Pick-Up Parties.

Follow Filco and their events at filco.com and IG: filcoevents

This episode's music in "Tang" by Chris Emond. Follow Chris on Spotify, http://bit.ly/ChrisEmond Featured in issue 13.2 "Sight and Sound" 2021 https://www.content-magazine.com/issue/issue-13-2/ 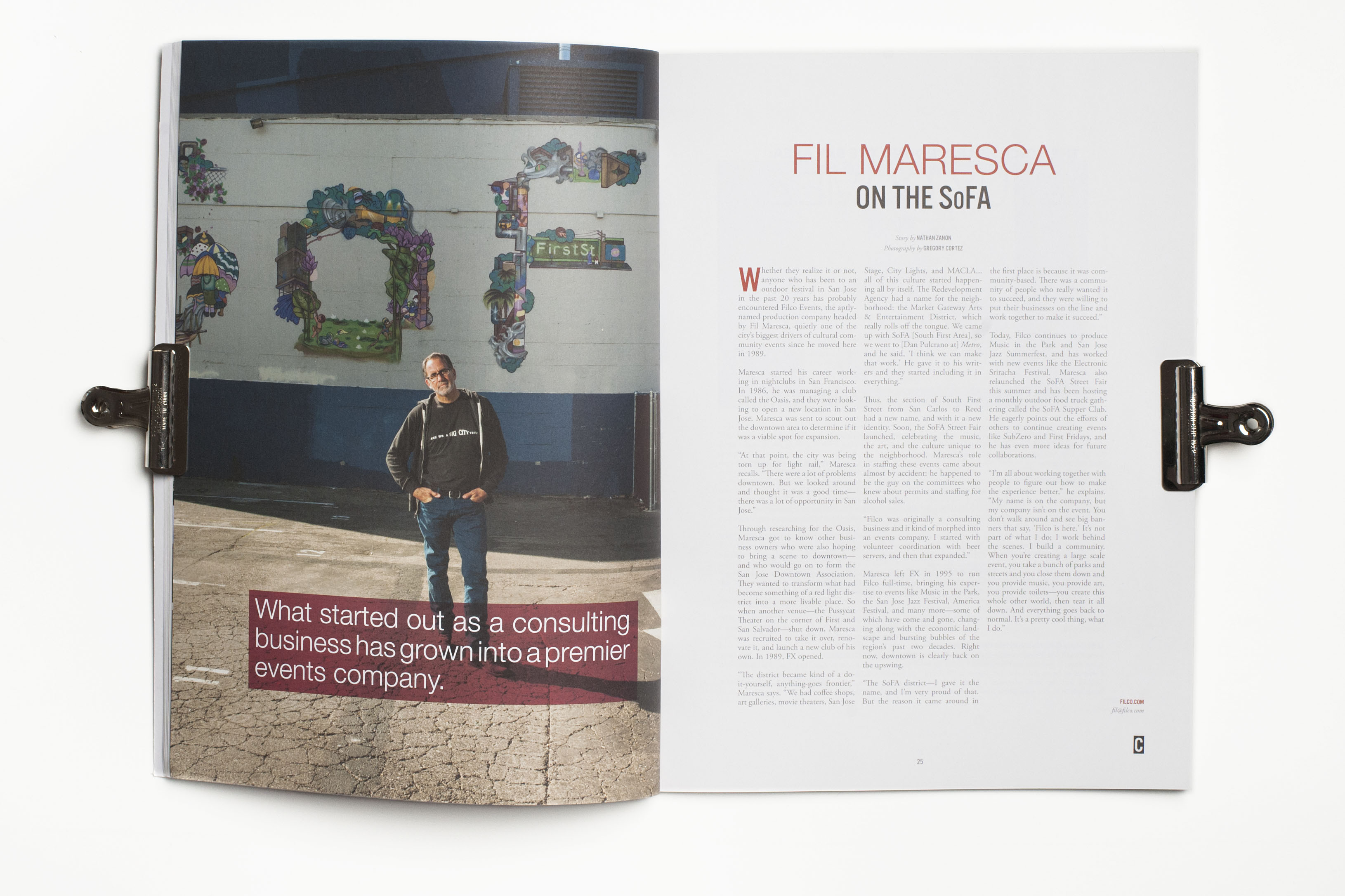 Whether they realize it or not, anyone who has been to an outdoor festival in San Jose in the past 20 years has probably encountered Filco Events, the aptly-named production company headed by Fil Maresca, quietly one of the city’s most significant drivers of cultural community events since he moved here in 1989.

Maresca started his career working in nightclubs in San Francisco. In 1986, he was managing a club called the Oasis, and they were looking to open a new location in San Jose. Maresca was sent to scout out the downtown area to determine if it was a viable spot for expansion.

“At that point, the city was being torn up for light rail,” Maresca recalls. “There were a lot of problems downtown. But we looked around and thought it was a good time— there was a lot of opportunity in San Jose.”

Through researching for the Oasis, Maresca got to know other business owners who were also hoping to bring a scene to downtown— and who would go on to form the San Jose Downtown Association. They wanted to transform what had become something of a red-light district into a more livable place. So when another venue—the Pussycat Theater on the corner of First and San Salvador—shut down, Maresca was recruited to take it over, renovate it, and launch a new club of his own. In 1989, FX opened.

“The district became kind of a do-it-yourself, anything-goes frontier,” Maresca says. “We had coffee shops, art galleries, movie theaters, San Jose Stage, City Lights, and MACLA... all of this culture started happening all by itself. The Redevelopment Agency had a name for the neighborhood: the Market Gateway Arts & Entertainment District, which rolls off the tongue. We came up with SoFA [South First Area], so we went to [Dan Pulcrano at] Metro, and he said, ‘I think we can make that work.’ He gave it to his writers, and they started including it in everything.”

Thus, the section of South First Street from San Carlos to Reed had a new name and a new identity. Soon, the SoFA Street Fair launched, celebrating the music, the art, and the culture unique to the neighborhood. Maresca’s role in staffing these events came about almost by accident: he happened to be the guy on the committees who knew about permits and staffing for alcohol sales.

“Filco was originally a consulting business, and it morphed into an events company. I started with volunteer coordination with beer servers, and then that expanded.”

Maresca left FX in 1995 to run Filco full-time, bringing his expertise to events like Music in the Park, the San Jose Jazz Festival, America Festival, and many more—some of which have come and gone, changing along with the economic landscape and bursting bubbles of the region’s past two decades. Right now, downtown is clearly back on the upswing.

“The SoFA district—I gave it the name, and I’m very proud of that. But the reason it came around in the first place is that it was community-based. There was a community of people who really wanted it to succeed, and they were willing to put their businesses on the line and work together to make it succeed.”

Today, Filco continues to produce Music in the Park and San Jose Jazz Summerfest, and has worked with new events like the Electronic Sriracha Festival. Maresca also relaunched the SoFA Street Fair this summer and has been hosting a monthly outdoor food truck gathering called the SoFA Supper Club. He eagerly points out the efforts of others to continue creating events like SubZero and First Fridays, and he has even more ideas for future collaborations.

“I’m all about working together with people to figure out how to make the experience better,” he explains. “My name is on the company, but my company isn’t on the event. You don’t walk around and see big banners that say, ‘Filco is here.’ It’s not part of what I do; I work behind the scenes. I build a community. When you’re creating a large scale event, you take a bunch of parks and streets and you close them down and you provide music, you provide art, you provide toilets—you create this whole other world, then tear it all down. And everything goes back to normal. It’s a pretty cool thing, what I do.”