At Ludwig’s, beer garden is spelled biergarten—the German way. It’s a small but important detail in the restaurant’s mission to bring a real sense of Europe to San Jose. From the communal seating, the Jägerschnitzel, and the boot-shaped beer glasses to the German members’ club that owns the building—this is as European as it gets in Silicon Valley. Co-owners Ben Bate and Nicole Jacobi set out to create something different and adventurous for guests in a “sterile” culinary ecosystem, as Bate describes it. “The mission, really, was to create a true piece of Europe here in America,” Bate says. “A lot of people attempt it, but I don’t know that they make it that.” 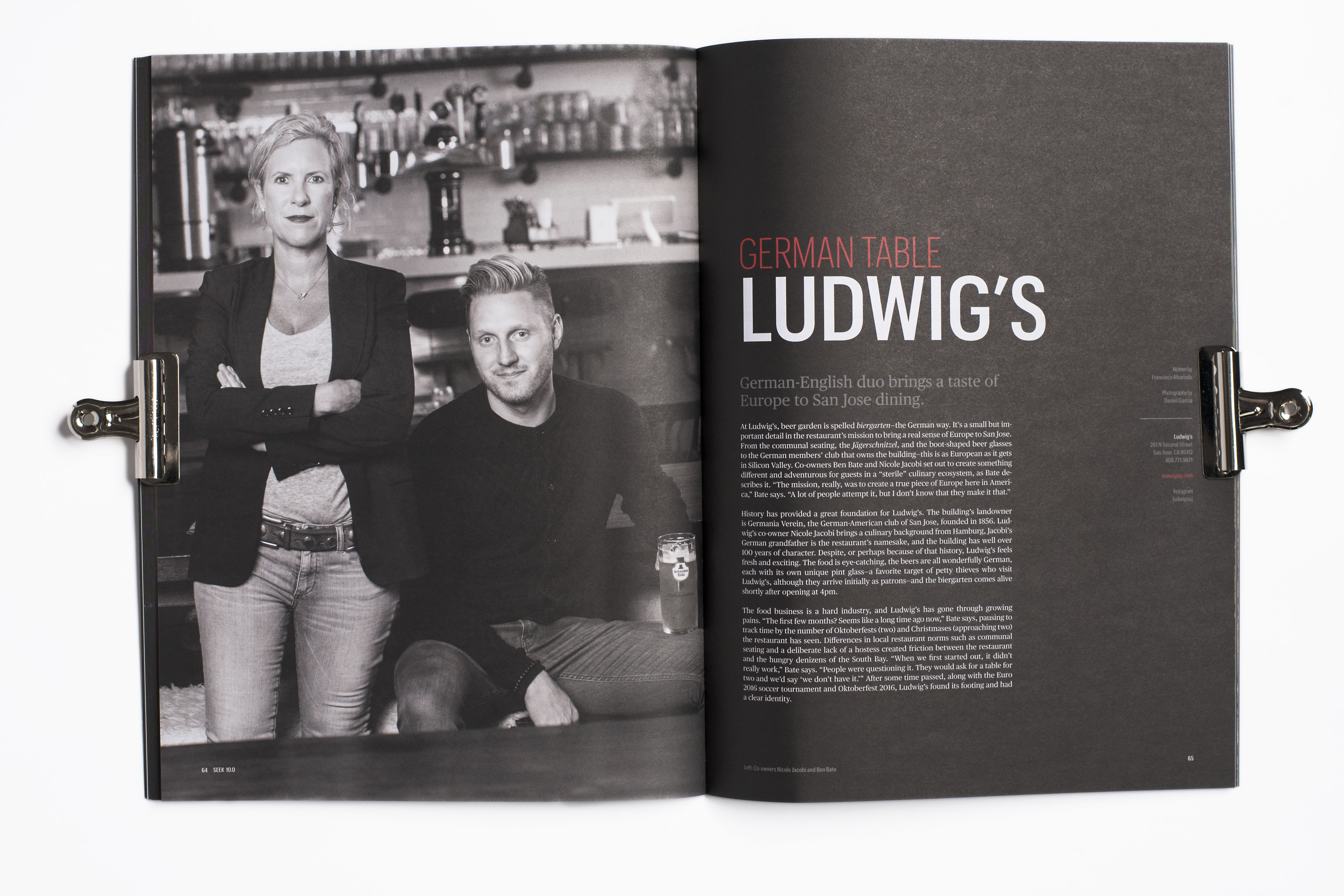 History has provided a great foundation for Ludwig’s. The building’s landowner is Germania Verein, the German-American club of San Jose, founded in 1856. Ludwig’s co-owner Nicole Jacobi brings a culinary background from Hamburg, Jacobi’s German grandfather is the restaurant’s namesake, and the building has well over 100 years of character. Despite, or perhaps because of that history, Ludwig’s feels fresh and exciting. The food is eye-catching, the beers are all wonderfully German, each with its own unique pint glass—a favorite target of petty thieves who visit Ludwig’s, although they arrive initially as patrons—and the biergarten comes alive shortly after opening at 4pm.

The food business is a hard industry, and Ludwig’s has gone through growing pains. “The first few months? Seems like a long time ago now,” Bate says, pausing to track time by the number of Oktoberfests (two) and Christmases (approaching two) the restaurant has seen. Differences in local restaurant norms such as communal seating and a deliberate lack of a hostess created friction between the restaurant and the hungry denizens of the South Bay. “When we first started out, it didn’t really work,” Bate says. “People were questioning it. They would ask for a table for two and we’d say ‘we don’t have it.’” After some time passed, along with the Euro 2016 soccer tournament and Oktoberfest 2016, Ludwig’s found its footing and had a clear identity.

“This is comfort food,” Bate says. “It’s that feel of home. Big beer, meatballs, mashed potatoes. It’s exactly what I’d love to eat at home.” Creating that feeling of home was critical for Bate and Jacobi. Cooking for their families is important in each of their lives and became an objective for the business they shared, helping them find common ground. Finding common ground was critical, as the duo had not previously met before becoming business partners. The first day they met was the day they signed the lease for the building, Bate recalls. They shared a vision that stemmed from their love of cooking and taking care of others and jumped into business together feet first. “It’s all rolled in—my passion and her knowledge,” Bate says, “and it works really well.”

A large part of why Ludwig’s “works really well” is the importance placed on customer service. Read their Yelp reviews and you’ll see the common thread—no matter their take on the food, the reviewer always praised the service. “I tell my staff: ‘People choose to come here,’” Bate says. “People have a lot of choices when they go out and eat nowadays, so if someone decides to come here, I want all my staff to buy into the fact that you have to appreciate them when they sit down to eat here.” That approach to service is why San Jose has embraced Ludwig’s, and why regulars—literally—embrace Bate. “A lot of customers will give me a cuddle when they come in,” Bate laughs. 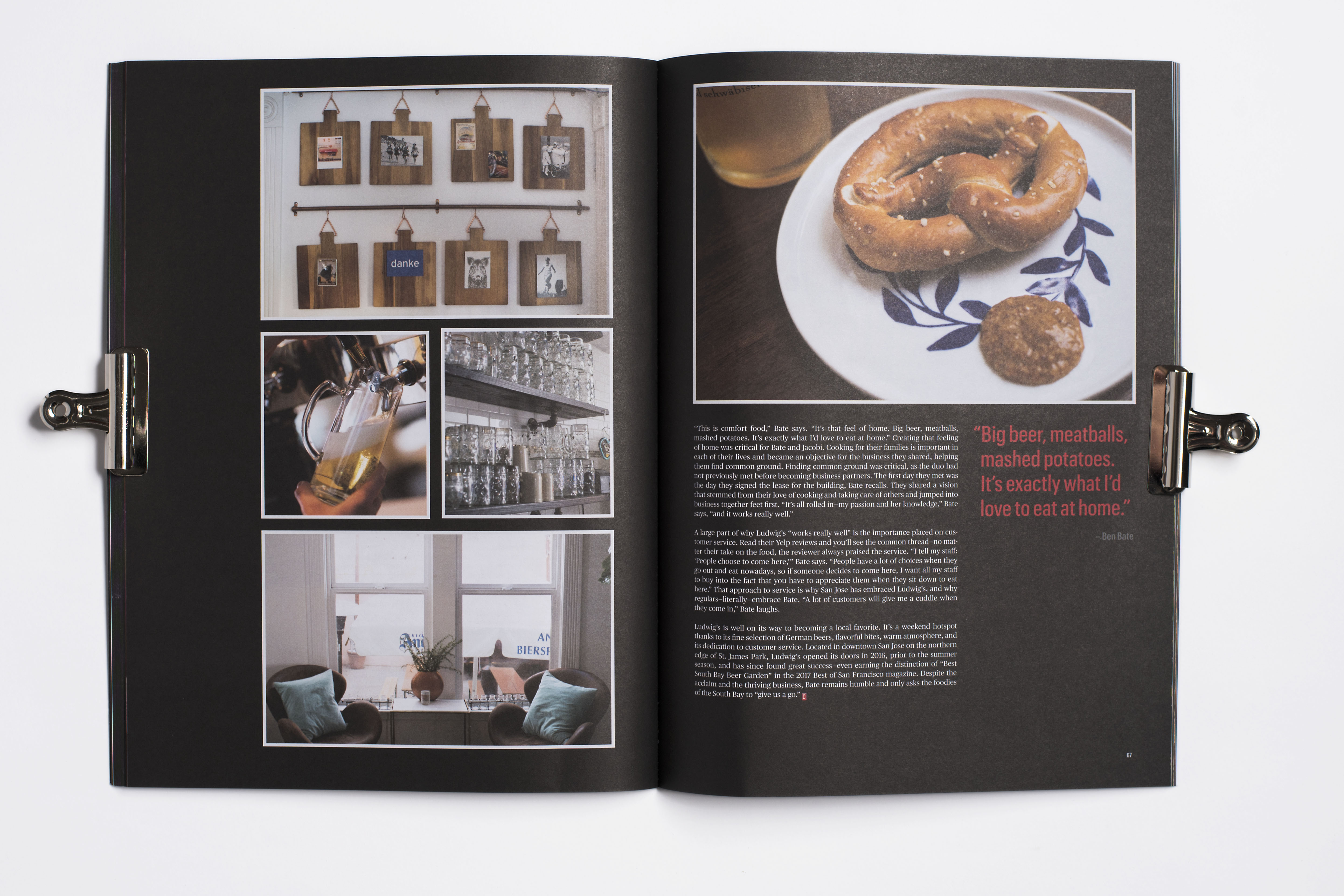 Ludwig’s is well on its way to becoming a local favorite. It’s a weekend hotspot thanks to its fine selection of German beers, flavorful bites, warm atmosphere, and its dedication to customer service. Located in downtown San Jose on the northern edge of St. James Park, Ludwig’s opened its doors in 2016, prior to the summer season, and has since found great success—even earning the distinction of “Best South Bay Beer Garden” in the 2017 Best of San Francisco magazine. Despite the acclaim and the thriving business, Bate remains humble and only asks the foodies of the South Bay to “give us a go.”