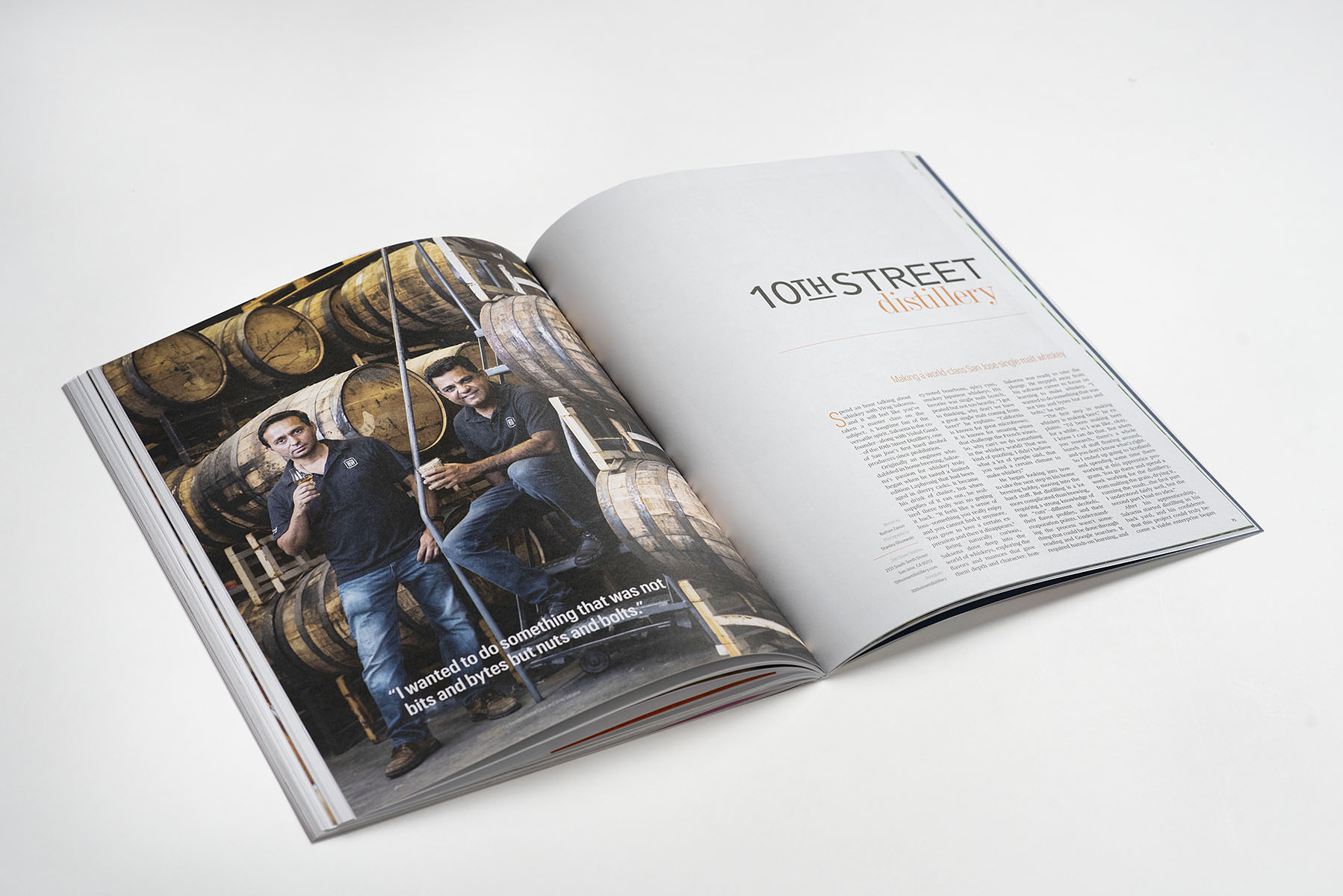 Spend an hour talking about whiskey with Virag Saksena, and it will feel like you’ve taken a master class on the subject. A longtime fan of the versatile spirit, Saksena is the cofounder—along with Vishal Gauri —of the 10th Street Distillery, one of San Jose’s first hard alcohol producers since prohibition.

Originally an engineer who dabbled in home brewing, Saksena’s passion for whiskey truly began when he tasted a limited edition Laphroaig that had been aged in sherry casks. It became his drink of choice, but when supplies of it ran out, he realized there truly was no getting it back. “It feels like a sense of loss—something you really enjoy and you cannot find it anymore. You grow to love a certain expression and then it disappears.”

Being naturally curious, Saksena dove deep into the world of whiskeys, exploring the flavors and nuances that gave them depth and character: honey-noted bourbons, spicy ryes, smokey Japanese whiskeys. His favorite was single malt Scotch, peated but not too heavily. “I got to thinking, why don’t we have a great single malt coming from here?” he explains. “California is known for great microbrews; it is known for amazing wines that challenge the French wines. So, why can’t we do something in the whiskey world? That was kind of puzzling. I didn’t believe what a lot of people said, that you need a certain climate to make whiskey.”

He began looking into how to take the next step in his home brewing hobby, moving into the hard stuff. But distilling is a lot more complicated than brewing, requiring a strong knowledge of the “cuts”—different alcohols, their flavor profiles, and their evaporation points. Understanding the process wasn’t something that could be done through reading and Google searches. It required hands-on learning, and Saksena was ready to take the plunge. He stepped away from his software career to focus on learning to make whiskey. “I wanted to do something that was not bits and bytes but nuts and bolts,” he says.

“The first step in making whiskey is making beer,” he explains. “I’d been making beer for a while, so I was like, okay, I know I can do that. But when you research, there’s a whole bunch of stuff floating around, and you don’t know what’s right. So I ended up going to Scotland and spending some time there working at this apprentice program. You go there and spend a week working for the distillery, from malting the grain, drying it, running the mash…the first part I understood fairly well, but the second part I had no idea.”

After his apprenticeship, Saksena started distilling in his back yard, and his confidence that this project could truly become a viable enterprise began to grow. He also built some of his own prototypes to improve the process. At the distillery, he explains how the TechShop in San Jose was an incubator for these prototypes. “I like building stuff,” he says, “whether it’s software or electronics and hardware. Let me give you an example.” From behind a desk, he pulls out a hefty, complex-looking object made of metal and glass. It’s a shell and tube condenser, a device used to liquify alcohol vapors, and Saksena created it by hand at the now-defunct maker space.

When he and his business partner began to explore the business side of things, searching for a space that would accommodate the equipment and technical processes required of a distillery, they found an encouraging partner in the City of San Jose. “We talked to cities all over the Bay Area,” Saksena recalls. “Some said, ‘We want big software firms here, we don’t need this.’ But San Jose was very supportive; they were very open. They worked with us on the regulations. There are fire and zoning requirements…you can’t just go into an empty shell. Starting a software company is fairly easy: you rent space in an office park, and you can just do it. This was a complex project. It took us about a year just to find a place.”

The location they found (on South 10th Street) is in the warehouse district north of downtown that is also home to several of the new crop of craft breweries. These spaces are perfect for alcohol production, as they can store the large fermenters required in the process. The 10th Street space is huge but is already filling up, housing the vats of mash and wort, custom made copper stills, and, of course, stacks of barrels with whiskey aging inside.

Speaking of the aging process, any whiskey drinker must ask about the age of the bottle in question. Some take eight, ten, twelve years or more before they are bottled and shipped out to the public. But Saksena wanted something they could bring to market in a short timeframe. Although additional products are forthcoming, their currently available single malt (the only product on the market at the moment) only ages for about 14-18 months. And they have eschewed the workaround common in small-batch distilleries of using tiny barrels to extract the flavor more quickly. Instead, they focus on making a clean, flavorful product from the outset that doesn’t require extensive aging.

“People ask how long we age the whiskey,” Saksena says. “My response is, ‘As long as it takes.’ ” He offers a taste of another product, not yet ready for consumption. It’s delicious, but with more bite than the single malt and no earthy peat flavor. His nuanced palette says it needs to wait. “This will stay in the barrel until it’s ready.” They have as many as five different varieties that are in various stages of the aging process.

They use a number of methods to produce the clean but flavorful effect they were looking for in their signature single malt, including fermenting the wort in open air for a period of time to allow local wild yeasts to do their work. This creates an initial beer that has a distinctly “San Francisco sourdough” flavor to it, which they carefully retain throughout the distilling. They also import specialty peated malts from Scotland, and the custom stills imbue the whiskey with maximum taste while still cutting out the harsh alcohols.

Their single malt whiskey is currently available at several South Bay bars and restaurants, including Paper Plane, Haberdasher, and Alexander’s Steakhouse—and bottles can be found at some markets and liquor shops that carry local products. And while the distillery does not yet have a permit for a tasting room, private tours are available for groups by appointment.

Saksena is clearly proud of and passionate about his whiskey, and the fact that he could make it in his home city of San Jose means even more to him. He makes efforts to involve the community, recycling the grain for use by local farmers and working with small local businesses to distribute. “I wanted to do something which allowed me to work with my local community. It’s something which was missing [in software], and I wanted to get back to—not working across four time zones, but something grounded in the community.”

So, next time you get a chance, take a seat at your local bar, order a shot of 10th Street whiskey, and enjoy a uniquely San Jose flavor. It’s worth savoring.