Interview and Photography by:  Victoria Felicity 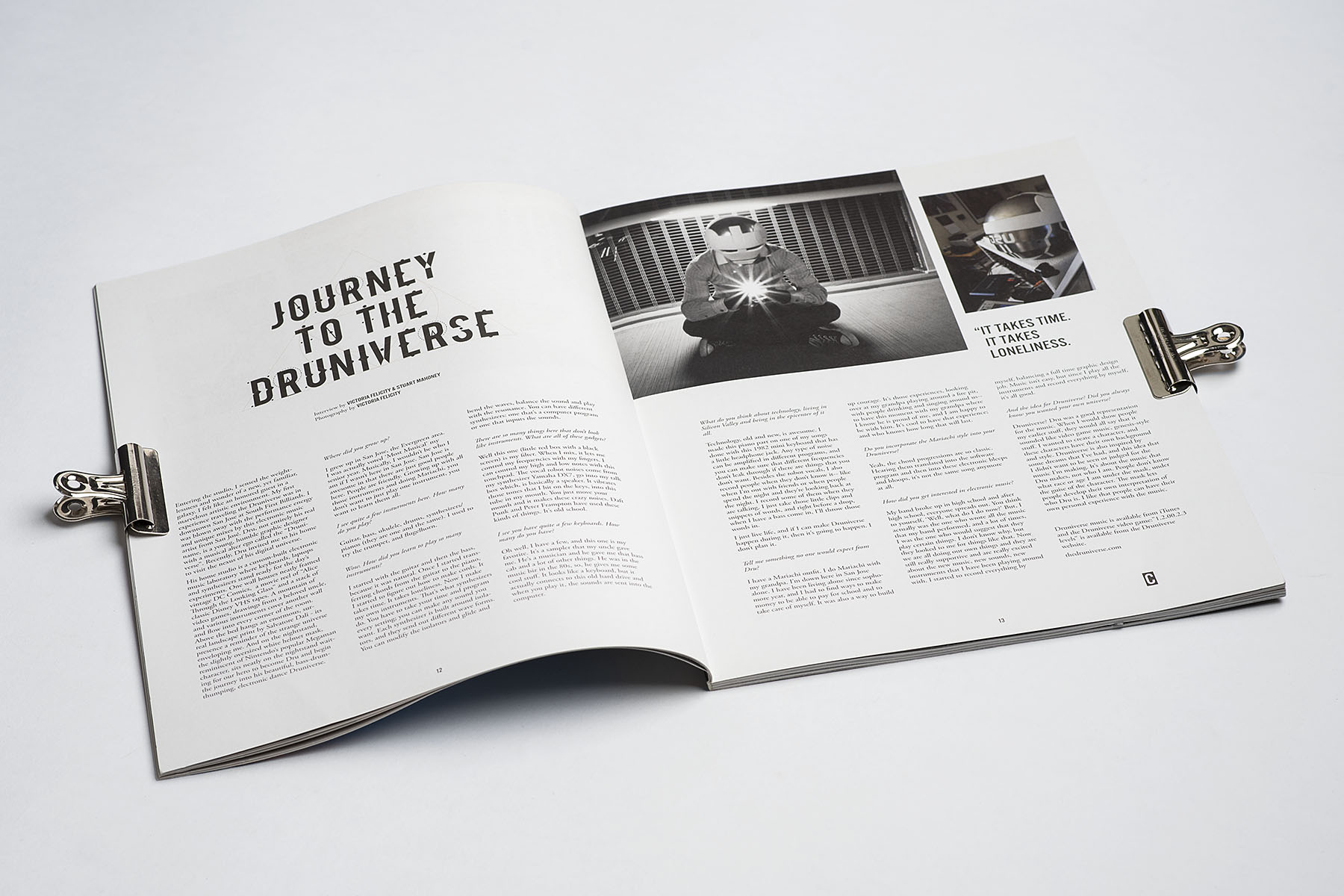 Entering the studio, I sensed the weightlessness and wonder of a new, yet familiar, galaxy. I felt like an honored guest in a marvelous artistic environment. My first experience traveling the Druniverse was in downtown San Jose at South First Billiards. I was blown away with the performance energy and unique mixes by this electronic music artist from San José. Dru, not entirely his real name, is a young, humble graphic designer with a musical alter ego called the “Druniverse”. Recently, Dru invited me to his home to visit the nexus of his digital universe. His home studio is a custom-built electronic music laboratory where keyboards, laptops and synthesizers stand ready for the day’s experiments. One wall houses neatly framed vintage DC Comics,  a movie reel of “Alice Through the Looking Glass” and a stack of classic Disney VHS tapes. A mountain of video games, drawings from a beloved uncle, and various instruments cover another wall and flow into every corner of the room. Above the bed hangs an enormous, surreal landscape print by Salvatore Dali - its presence a reminder of the strange universe enveloping me. And on the nightstand, the slightly oversized white helmet mask, reminiscent of Nintendo’s popular Megaman character, sits neatly on the nightstand waiting for our hero to become Dru and begin the journey into his beautiful, bass-drumthumping, electronic dance Druniverse.

Where did you grow up?

I grew up in San Jose, the Evergreen area. I was actually voted ‘Most Musical’ my senior year. Musically, I wouldn’t be who I am if I wasn’t here in San Jose. San Jose is awesome in that there are just good people here. People are friendly. Growing up with all those instruments and doing Mariachi, you don’t want to just play one instrument, you want to learn them all.

I see quite a few insturments here. How many do you play?

Guitar, bass, ukulele, drums, synthesizers/ pianos (they are one and the same). I used to try the trumpet, and flugelhorn.

Wow. How did you learn to play so many instruments?

I started with the guitar and then the bass, because it was natural. Once I started transferring chords from the guitar to the piano, I started to figure out how to make cords. It takes time. It takes loneliness. Now I make my own instruments. That’s what synthesizers do. You have to take your time and program every setting; you can make any sound you want. Each synthesizer is built around isolators, and they send out different wave forms. You can modify the isolators and glide and bend the waves, balance the sound and play with the resonance. You can have different synthesizers: one that’s a computer program or one that inputs the sounds.

“IT TAKES TIME. IT TAKES LONELINESS."

There are so many things here that don’t look like instruments. What are all of these gadgets?

Well this one (little red box with a black screen) is my filter. When I mix, it lets me control my frequencies with my fingers. I can control my high and low notes with this touchpad. The vocal robot noises come from my synthesizer Yamaha DX7, go into my talk box which, is basically a speaker. It vibrates those tones that I hit on the keys, into this tube in my mouth. You just move your mouth and it makes these crazy noises. Daft Punk and Peter Frampton have used these kinds of things. It’s old school.

I see you have quite a few keyboards. How many do you have?

Oh well, I have a few, and this one is my favorite. It’s a sampler that my uncle gave me. He’s a musician and he gave me that bass cab and a lot of other things. He was in the music biz in the 80s, so, he gives me some cool stuff. It looks like a keyboard, but it actually connects to this old hard drive and when you play it, the sounds are sent into the computer.

What do you think about technology, living in Silicon Valley and being in the epicenter of it all?

Technology, old and new, is awesome. I made this piano part on one of my songs done with this 1982 mini keyboard that has a little headphone jack. Any type of noise can be amplified in different programs, and you can make sure that different frequencies don’t leak through if there are things that you don’t want. Besides the robot vocals, I also record people when they don’t know it-- like when I’m out with friends or when people spend the night and they’re looking back at the night. I record some of them when they are talking. I just take those little clips and snippets of words, and right before a drop, when I have a bass come in, I’ll throw those words in. I just live life, and if I can make Druniverse happen during it, then it’s going to happen. I don’t plan it.

Tell me something no one would expect from Dru?

I have a Mariachi outfit. I do Mariachi with my grandpa. I’m down here in San Jose alone. I have been living alone since sophomore year, and I had to find ways to make money to be able to pay for school and to take care of myself. It was also a way to build up courage. It’s those experiences, looking over at my grandpa playing around a fire pit, with people drinking and singing around us-- to have this moment with my grandpa where I know he is proud of me, and I am happy to be with him. It’s cool to have that experience; and who knows how long that will last.

Do you incorporate the Mariachi style into your Druniverse?

Yeah, the chord progressions are so classic. Hearing them translated into the software program and then into these electronic bleeps and bloops, it’s not the same song anymore at all.

My band broke up in high school and after high school, everyone spreads out. You think to yourself, ‘Well, what do I do now?’ But, I actually was the one who wrote all the music that my band performed, and a lot of times, I was the one who would suggest that they play certain things. I don’t know why, but they looked to me for things like that. Now we are all doing our own things and they are still really supportive and are really excited about the new music, new sounds, new instruments that I have been playing around with. I started to record everything by myself, balancing a full time graphic design job. Music isn’t easy, but since I play all the instruments and record everything by myself, it’s all good.

And the idea for Druniverse? Did you always know you wanted your own universe?

Druniverse? Dru was a good representation for the music. When I would show people my earlier stuff, they would all say that it sounded like video game music, genesis-style stuff. I wanted to create a character, and these characters have their own background and style. Druniverse is also inspired by some dreams that I’ve had, and this idea that I didn’t want to be seen or judged for the music I’m making. It’s about the music that Dru makes, not who I am. People don’t know what race or age I am under the mask, under the guise of the character. The mask lets people develop their own interpretation of who Dru is. I like that people can have their own personal experience with the music. 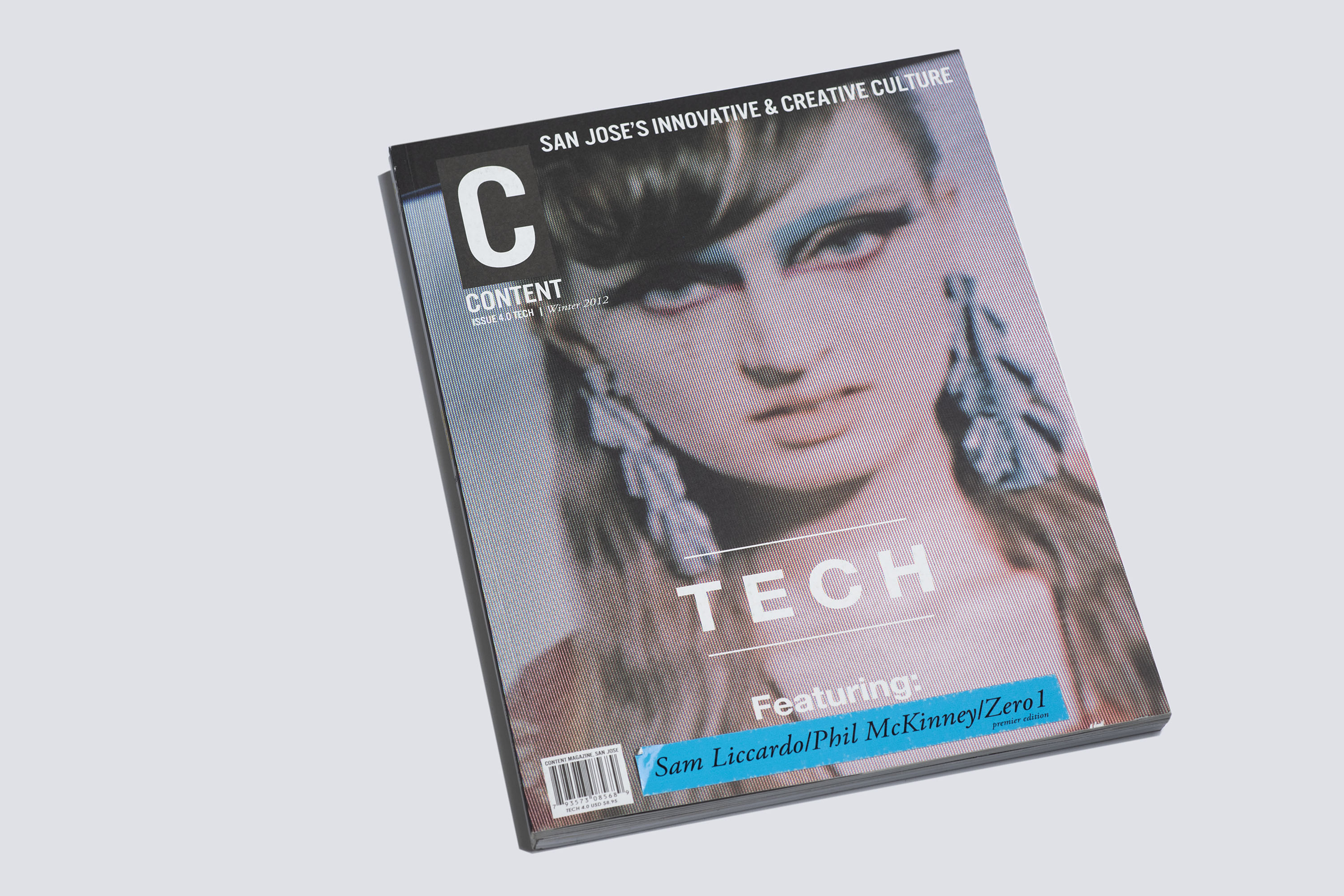