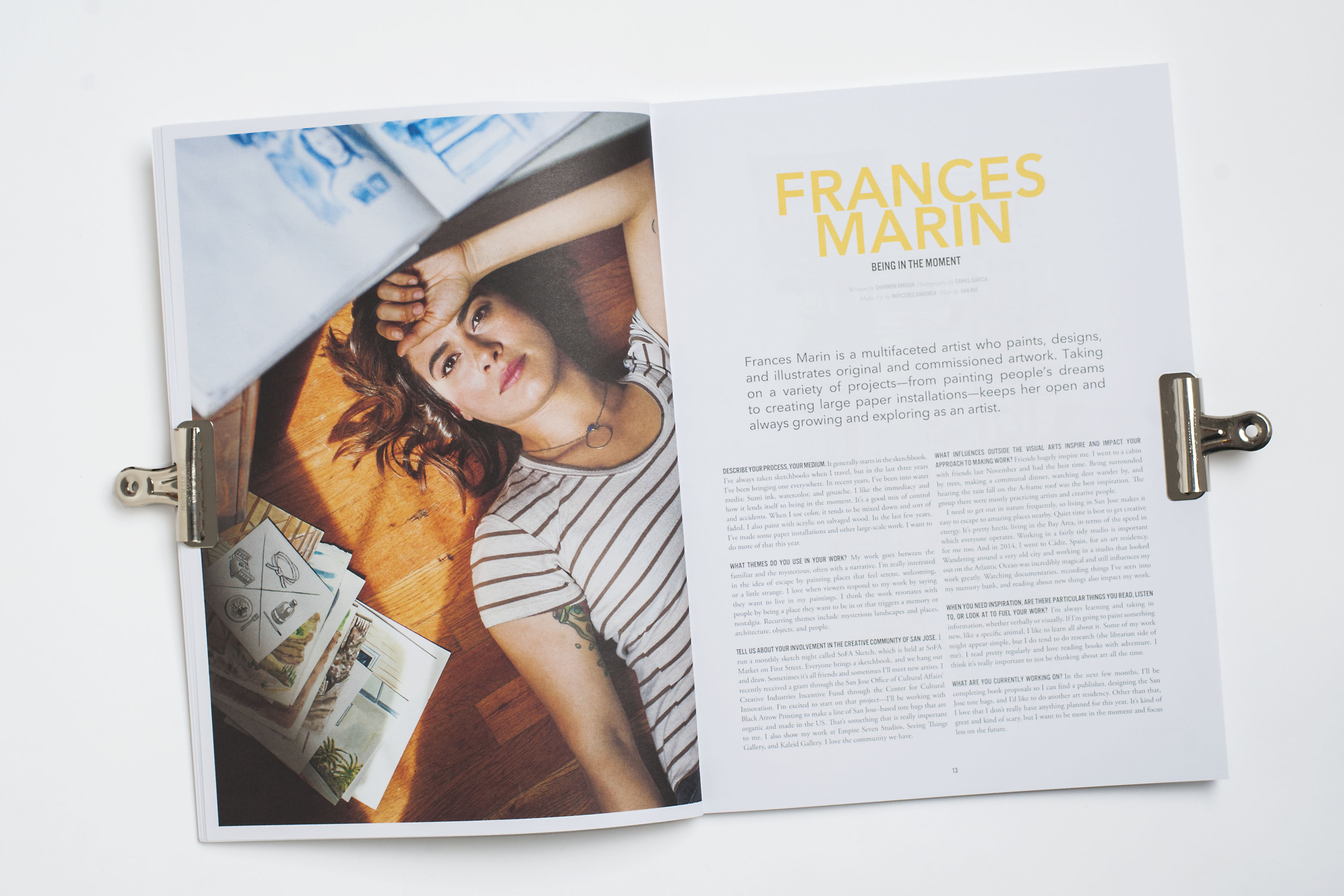 Frances Marin is a multifaceted artist who paints, designs, and illustrates original and commissioned artwork. Taking on a variety of projects—from painting people’s dreams to creating large paper installations—keeps her open and always growing and exploring as an artist.

Describe your process, your medium.

It generally starts in the sketchbook. I’ve always taken sketchbooks when I travel, but in the last three years I’ve been bringing one everywhere. In recent years, I’ve been into water media: Sumi ink, watercolor, and gouache. I like the immediacy and how it lends itself to being in the moment. It’s a good mix of control and accidents. When I use color, it tends to be mixed down and sort of faded. I also paint with acrylic on salvaged wood. In the last few years, I’ve made some paper installations and other large-scale work. I want to do more of that this year.

What themes do you use in your work?

My work goes between the familiar and the mysterious, often with a narrative. I’m really interested in the idea of escape by painting places that feel serene, welcoming, or a little strange. I love when viewers respond to my work by saying they want to live in my paintings. I think the work resonates with people by being a place they want to be in or that triggers a memory or nostalgia. Recurring themes include mysterious landscapes and places, architecture, objects, and people.

Tell us about your involvement in the creative community of San Jose.

I run a monthly sketch night called SoFA Sketch, which is held at SoFA Market on First Street. Everyone brings a sketchbook, and we hang out and draw. Sometimes it’s all friends and sometimes I’ll meet new artists. I recently received a grant through the San Jose Office of Cultural Affairs’ Creative Industries Incentive Fund through the Center for Cultural Innovation. I’m excited to start on that project—I’ll be working with Black Arrow Printing to make a line of San Jose–based tote bags that are organic and made in the US. That’s something that is really important to me. I also show my work at Empire Seven Studios, Seeing Things Gallery, and Kaleid Gallery. I love the community we have.

What influences outside the visual arts inspire and impact your approach to making work?

Friends hugely inspire me. I went to a cabin with friends last November and had the best time. Being surrounded by trees, making a communal dinner, watching deer wander by, and hearing the rain fall on the A-frame roof was the best inspiration. The group there were mostly practicing artists and creative people. I need to get out in nature frequently, so living in San Jose makes it easy to escape to amazing places nearby. Quiet time is best to get creative energy. It’s pretty hectic living in the Bay Area, in terms of the speed in which everyone operates. Working in a fairly tidy studio is important for me too. And in 2014, I went to Cádiz, Spain, for an art residency. Wandering around a very old city and working in a studio that looked out on the Atlantic Ocean was incredibly magical and still influences my work greatly. Watching documentaries, recording things I’ve seen into my memory bank, and reading about new things also impact my work.

When you need inspiration, are there particular things you read, listen to, or look at to fuel your work?

I’m always learning and taking in information, whether verbally or visually. If I’m going to paint something new, like a specific animal, I like to learn all about it. Some of my work might appear simple, but I do tend to do research (the librarian side of me). I read pretty regularly and love reading books with adventure. I think it’s really important to not be thinking about art all the time.

What are you currently working on?

In the next few months, I’ll be completing book proposals so I can find a publisher, designing the San Jose tote bags, and I’d like to do another art residency. Other than that, I love that I don’t really have anything planned for this year. It’s kind of great and kind of scary, but I want to be more in the moment and focus less on the future.

This article originally appeared in Issue 8.1 Sight and Sound.