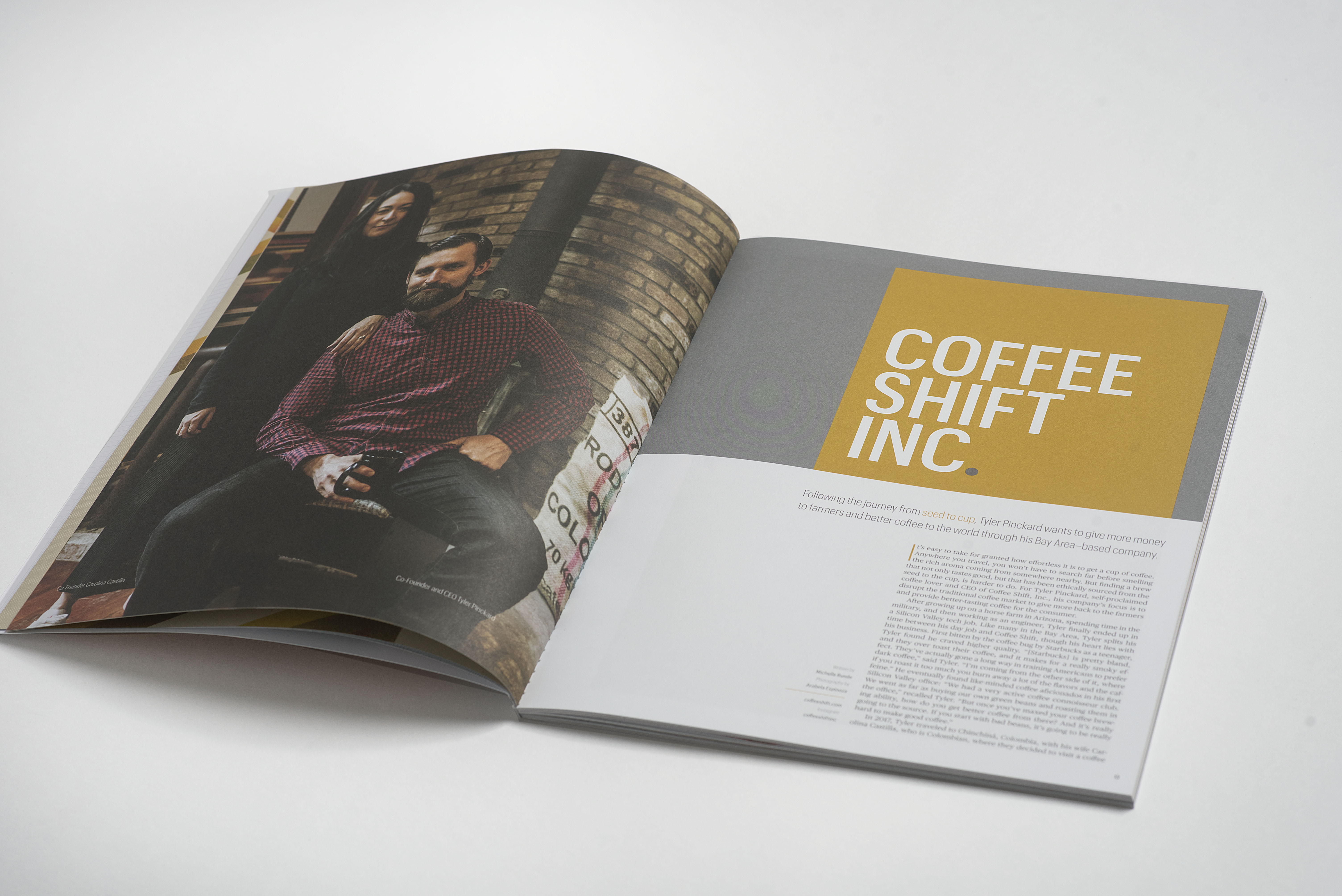 Following the journey from seed to cup, Tyler Pinckard wants to give more money to farmers and better coffee to the world through his Bay Area–based company.

It’s easy to take for granted how effortless it is to get a cup of coffee. Anywhere you travel, you won’t have to search far before smelling the rich aroma coming from somewhere nearby. But finding a brew that not only tastes good, but that has been ethically sourced from the seed to the cup, is harder to do. For Tyler Pinckard, self-proclaimed coffee lover and CEO of Coffee Shift, Inc., his company’s focus is to disrupt the traditional coffee market to give more back to the farmers and provide better-tasting coffee for the consumer.

After growing up on a horse farm in Arizona, spending time in the military, and then working as an engineer, Tyler finally ended up in a Silicon Valley tech job. Like many in the Bay Area, Tyler splits his time between his day job and Coffee Shift, though his heart lies with his business. First bitten by the coffee bug by Starbucks as a teenager, Tyler found he craved higher quality. “[Starbucks] is pretty bland, and they over toast their coffee, and it makes for a really smoky effect. They’ve actually gone a long way in training Americans to prefer dark coffee,” said Tyler. “I’m coming from the other side of it, where if you roast it too much you burn away a lot of the flavors and the caffeine.” He eventually found like-minded coffee aficionados in his first Silicon Valley office: “We had a very active coffee connoisseur club. We went as far as buying our own green beans and roasting them in the office,” recalled Tyler. “But once you’ve maxed your coffee brewing ability, how do you get better coffee from there? And it’s really going to the source. If you start with bad beans, it’s going to be really hard to make good coffee.”

"If you start with bad beans, it’s going to be really hard to make good coffee."

In 2017, Tyler traveled to Chinchiná, Colombia, with his wife Carolina Castilla, who is Colombian, where they decided to visit a coffee farm. When a local farmer told Tyler how much they were paid, he was stunned. “I was just taken aback with how things worked,” he said. “I saw that they were loading huge bags of coffee into a truck, doing 90 percent of the work to bring us quality coffee, and they receive so little for the amount they do.”

Knowing they wanted to get involved, Tyler and Carolina began to forge relationships with farmers in Colombia to source the beans. Going so far as to travel into the mountains to the source of water that nurtures the coffee plants, they immersed themselves in every step of the process.” [B]eing a Californian for the last 10 years, we have the quite the wine culture here,” said Tyler. “If you go to the vineyard, they won’t tell you, ‘These grapes are basically the same as those grapes.’ No, they’ll tell you, ‘These were grown on a south-facing hill, with soil at the perfect pH.’ So I thought, ‘How can we imbue that same sort of connoisseur culture that we have for wine into coffee? And how can we make a system that works in a way that incentivizes the farmers to work with us and lift them out of poverty?’ ”

Officially founded in 2018, the core tenant of Coffee Shift is to give more back to the farmer. As Tyler explained, “The big thing about the business is we pay more for the coffee, and we give ownership stake in [the] company so [farmers] earn shares in the company. The idea is if we invest in the farmers, they are able to use better agricultural processes. I’m trying to build a positive feedback system, because it’s been hard for coffee growers captured by the commodity market, since commodity prices have been extremely low. Most famers I’m working with, they were not making as much as the inputs required to produce that coffee. So it’s obviously an unsustainable system. [Coffee Shift] is a corporation for social justice.”

Coffee Shift sells beans online to businesses and directly to consumers. Tyler will continue to work with Colombian farmers to source small-batch coffee and hopes to find more customers who share his dedication to the perfect cup of coffee, while giving back to the farmers who make each sip possible.