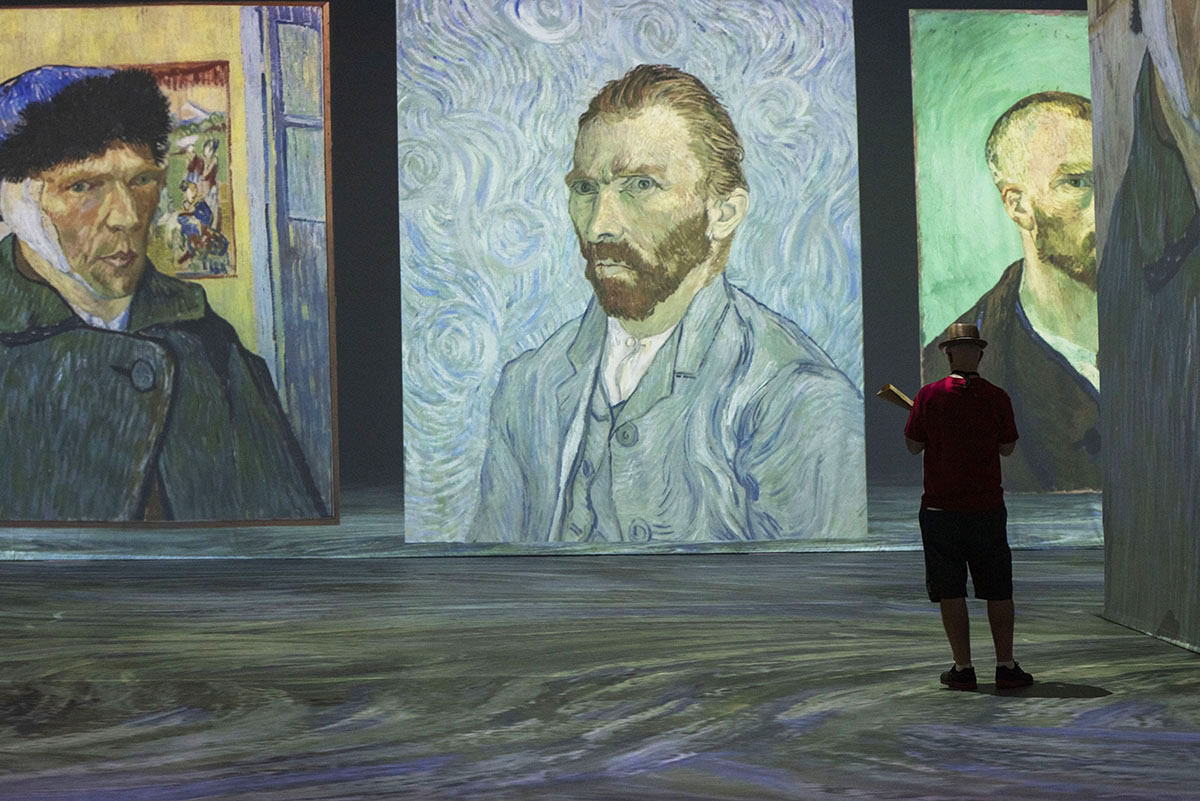 Ever been so drawn to a piece at an art museum that you've wanted to submerge yourself in it? Dive through the canvas and swim around in the paint? At Beyond Van Gogh: The Immersive Experience, you can.

Beyond Van Gogh takes 300+ masterpieces by Netherlands' most famous painter, then renders them into a 35-minute multimedia experience that traverses the artist's career. It's certainly surreal, seeing Vincent van Gogh's paintings pour off the canvas and wash across the expansive floor and walls of the San Jose McEnery Convention Center. As the projected performance unfurls and the artwork fills the entirety of visitors' visions, it soaks them in the feeling of the colors. It allows them to appreciate all the details, down to the individual brushstrokes (which often stretch longer and wider than guests themselves).

"We want to show a contemporary audience that van Gogh is still relevant today," says Fanny Curtat, the art historian consulting on the project and a vital part of the exhibit's creative team. She points out that the painter's life of hardships resonates with those who have suffered their own difficulties during the pandemic. After all, "van Gogh painted Starry Night while he was in the asylum!" she points out—and yet, despite the pain, he created something exquisite.

"So you have somebody that can show you that even though you're struggling, you can transcend all of your struggles into works of art," she says. "He helps us look at things in a beautiful way and focus on the colors, the power that they have, the joy that the world can bring."

Recently, a few high-tech Van Gogh experiences have been making the circuit across the nation and the world (NOTE: This exhibit is different than the one that came to San Francisco this summer, called "Immersive Van Gogh"), but each and every exhibit showcases their own angle, highlighting different facets of this complicated man. San Jose's exhibit chooses to honor the bond between brothers, presenting a series of letters van Gogh wrote to his beloved brother Theo. The show also highlights the progression of the painter's palette—from the dark shades of van Gogh's early work to the addition of color after his move to Paris and his introduction to the impressionists, to the golden yellow hues after his consequent move to the South of France, to the intensely vivid colors of his most recognizable pieces during the final years of his life.

Curtat says that Beyond Van Gogh also leans into the remarkable movement of the artist's brushstrokes by causing his portraits to blink, his flowers to bloom, and his landscapes to swirl into shape. "You don't have to do much to animate his work—it's already moving," she notes. "We remember Starry Night's twirling sky more than anything."

Of course, the question everyone will ask is, "Is it worth it?"

We think so. Especially if you slow your pass to not only grab a few nice "grams"—if you pay attention and let yourself be fully immersed. You will be tempted to bypass the three switchback hallways of letters and quotes, but that section gives van Gogh's work a greater context. And we encourage you to take it in rather than hurry through to the main immersive hall.

When asked if projection-mapped exhibits are the art museum of tomorrow, Curtat is adamant that digital experiences by no means replace a trip to the Musée d'Orsay. "To me, it's complementary to a museum experience. Scale is one of the most important things in art. So when it's something huge and immense, you feel overpowered. But when you have art on the wall, you have the aura of the original, and you have a more intimate feel about it," she explains. "I encourage everybody who has a chance to go see a true van Gogh on the walls to do so because that's magical."

In the meantime? Come stroll among van Gogh's brushstrokes.

Beyond Van Gogh opens on September 24th and concludes November 14th. Complimentary beverages from the exhibits' partner, Keurig, are included with entry.