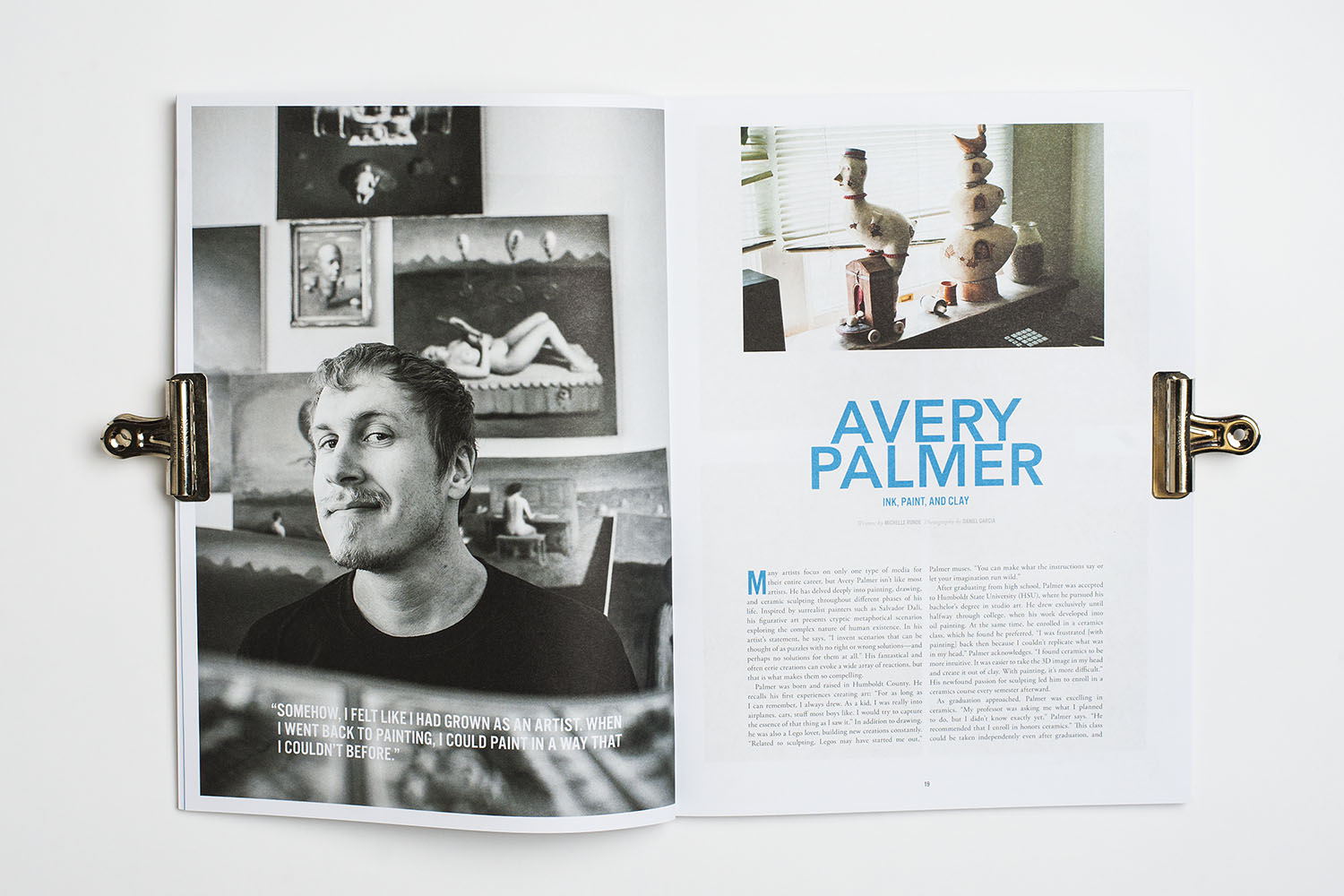 Many artists focus on only one type of media for their entire career, but Avery Palmer isn’t like most artists. He has delved deeply into painting, drawing, and ceramic sculpting throughout different phases of his life. Inspired by surrealist painters such as Salvador Dali, his figurative art presents cryptic metaphorical scenarios exploring the complex nature of human existence. In his artist’s statement, he says, “I invent scenarios that can be thought of as puzzles with no right or wrong solutions—and perhaps no solutions for them at all.” His fantastical and often eerie creations can evoke a wide array of reactions, but that is what makes them so compelling.

Palmer was born and raised in Humboldt County. He recalls his first experiences creating art: “For as long as I can remember, I always drew. As a kid, I was really into airplanes, cars, stuff most boys like. I would try to capture the essence of that thing as I saw it.” In addition to drawing, he was also a Lego lover, building new creations constantly. “Related to sculpting, Legos may have started me out,”

Palmer muses. “You can make what the instructions say or let your imagination run wild.”

After graduating from high school, Palmer was accepted to Humboldt State University (HSU), where he pursued his bachelor’s degree in studio art. He drew exclusively until halfway through college, when his work developed into oil painting. At the same time, he enrolled in a ceramics class, which he found he preferred. “I was frustrated [with painting] back then because I couldn’t replicate what was in my head,” Palmer acknowledges. “I found ceramics to be more intuitive. It was easier to take the 3D image in my head and create it out of clay. With painting, it’s more difficult.” His newfound passion for sculpting led him to enroll in a ceramics course every semester afterward.

As graduation approached, Palmer was excelling in ceramics. “My professor was asking me what I planned to do, but I didn’t know exactly yet,” Palmer says. “He recommended that I enroll in honors ceramics.” This class could be taken independently even after graduation, and Palmer ended up taking the class multiple times over the next few years. Without the pressure of his college studies, Palmer spent his day at the campus studio, living and breathing his work.

HSU participates in the California Conference for the Advancement of Ceramic Art (CCACA), and Palmer was asked to represent the university. The CCACA is held at the John Natsoulas Gallery in Davis, California. Not only was the conference a place to showcase his work; it was also a place to network and sell. “It was my first introduction into a ‘market’ where I could actually sell my work,” Palmer says. “It got me serious about thinking of my art as a career.” After he’d attended the conference multiple times, the John Natsoulas Gallery approached Palmer to offer to officially represent him as an artist. They would showcase his art locally and at various galleries around the United States. Palmer accepted and is incredibly grateful for this partnership: “It was nice to know my work would get out there and be seen by more people.”

Three years after graduating from HSU, Palmer was accepted to the master’s program for spatial art at San Jose State University (SJSU). Palmer was focused solely on sculpting, but because SJSU’s art program encouraged students to explore various media, he picked up his paintbrush again. “I didn’t experiment a lot, but I found my way back to drawing and painting about halfway through my master’s,” Palmer says. “By the time I left, I was focusing solely on painting. My ceramics were feeling a bit repetitive. Somehow, I felt like I had grown as an artist. When I went back to painting, I could paint in a way that I couldn’t before.” His paintings, like his sculptures, capture his fascination with the human condition, each piece a riddle for the viewer to solve.