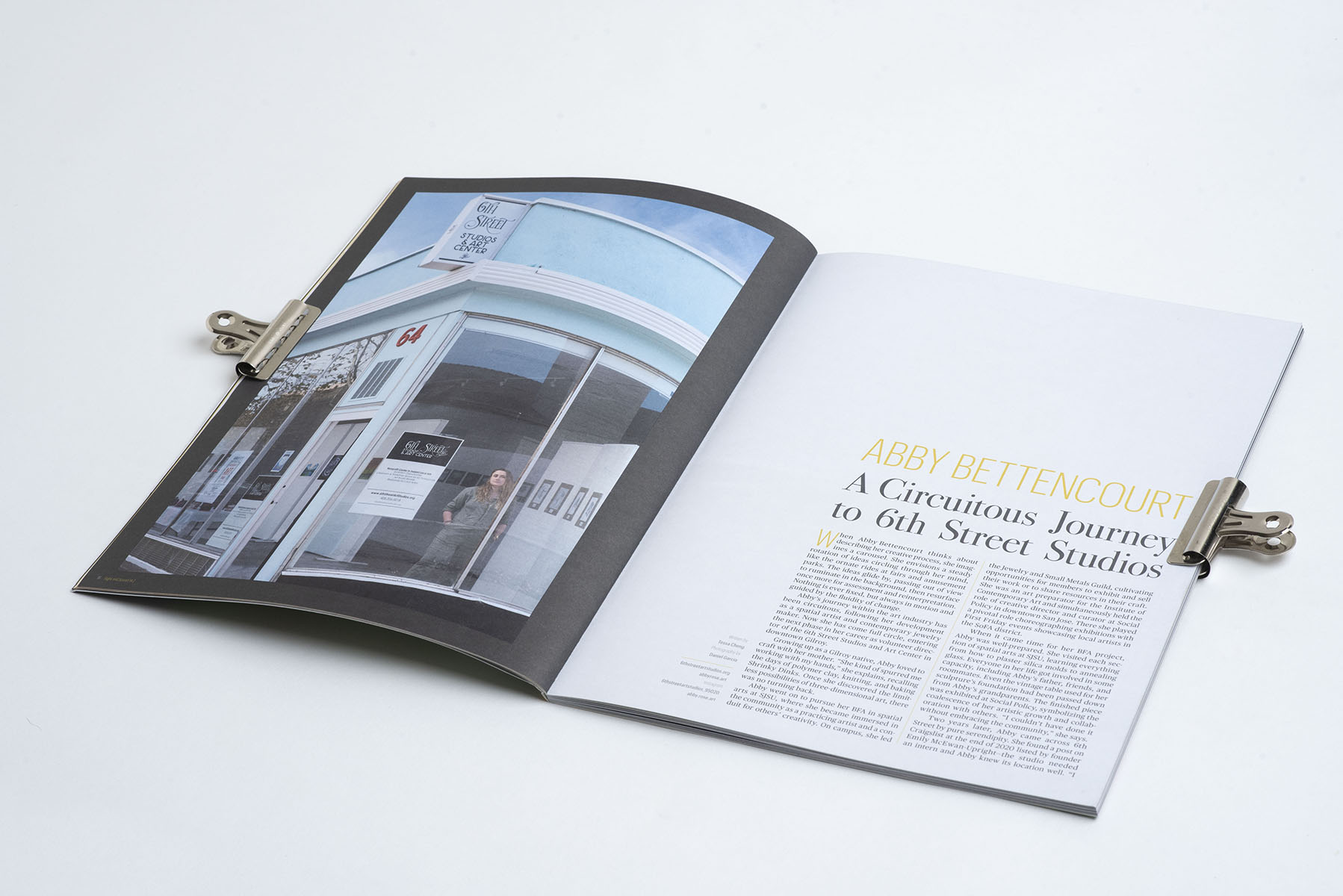 When Abby Bettencourt thinks about describing her creative process, she imagines a carousel. She envisions a steady rotation of ideas circling through her mind, like the ornate rides at fairs and amusement parks. The ideas glide by, passing out of view to ruminate in the background, then resurface once more for assessment and reinterpretation. Nothing is ever fixed, but always in motion and guided by the fluidity of change.

Abby’s journey within the art industry has been circuitous, following her development as a spatial artist and contemporary jewelry maker. Now she has come full circle, entering the next phase in her career as volunteer director of the 6th Street Studios and Art Center in downtown Gilroy.

Growing up as a Gilroy native, Abby loved to craft with her mother. “She kind of spurred me working with my hands,” she explains, recalling the days of polymer clay, knitting, and baking Shrinky Dinks. Once she discovered the limitless possibilities of three-dimensional art, there was no turning back.

Abby went on to pursue her BFA in spatial arts at SJSU, where she became immersed in the community as a practicing artist and a conduit for others’ creativity. On campus, she led the Jewelry and Small Metals Guild, cultivating opportunities for members to exhibit and sell their work or to share resources in their craft. She was an art preparator for the Institute of Contemporary Art and simultaneously held the role of creative director and curator at Social Policy in downtown San Jose. There she played a pivotal role choreographing exhibitions with First Friday events showcasing local artists in the SoFA district.

“I couldn’t have done it without embracing the community.” -Abby Bettencourt

When it came time for her BFA project, Abby was well-prepared. She visited each section of spatial arts at SJSU, learning everything from how to plaster silica molds to annealing glass. Everyone in her life got involved in some capacity, including Abby’s father, friends, and roommates. Even the vintage table used for her sculpture’s foundation had been passed down from Abby’s grandparents. The finished piece was exhibited at Social Policy, symbolizing the coalescence of her artistic growth and collaboration with others. “I couldn’t have done it without embracing the community,” she says.

Two years later, Abby came across 6th Street by pure serendipity. She found a post on Craigslist at the end of 2020 listed by founder Emily.McEwan-Upright—the studio needed an intern and Abby knew its location well. “I severely missed all the art organizing I did in downtown San Jose. So, after I toured the space and met Emily, I offered to help out where I could. The center’s mission is simple: to provide an inclusive and financially accessible creative space for artists of all disciplines,” she says.

The studio building itself has already lived many lives. Originally designed as a Studebaker dealership in the 1940s, it was later used as an auction showroom, then a window and shades shop during the 1990s. At one point it was a branch for Hope Services, a support agency for disability and mental health. It even acted as headquarters for the Gilroy Dispatch. Over the decades, its walls and mid-century façade have changed little, but the operations within have adapted to the community around it. Now the center is gaining momentum once more, this time with Abby adding to its story.

The pandemic poses an exceptional challenge, affecting how the center can engage with the public. “Everyone is apprehensive about going out and about, and rightly so,” she says. It’s also been a matter of tapping into the local creative community—bringing people together.

A variety of artists have already rented studios through the center’s residency program—ranging from illustrators, oil painters, graphic designers, musicians, ceramicists, screen printers, and a soap and candle maker. Some are local, some commute from San Jose, Hollister, or Santa Cruz. The exhibits draw from this rich resource of talent, displaying seasoned and emerging artists alike who work in a symphony of mediums. The center even partners with local schools for group shows to strengthen Gilroy’s arts education.

Then there’s the monthly art walks, designed to explore the arts and culture scene developing in the historic downtown district. Likewise for the center’s art market events, which celebrate small business artists while giving hobbyists and crafters time in the spotlight.

Abby describes 6th Street’s operations as delicately balanced. She has several projects waiting in the wings between the schedule for exhibits and open studio days. Eventually she would like to integrate her own expertise by instructing workshops on jewelry making or enameling, hoping to ease people past feelings of intimidation, so they can flourish in the craft. The possibilities are endless.

True to her process, Abby brings back all the artistic wisdom and confidence gained from her creative journey thus far, putting a new spin on something familiar. 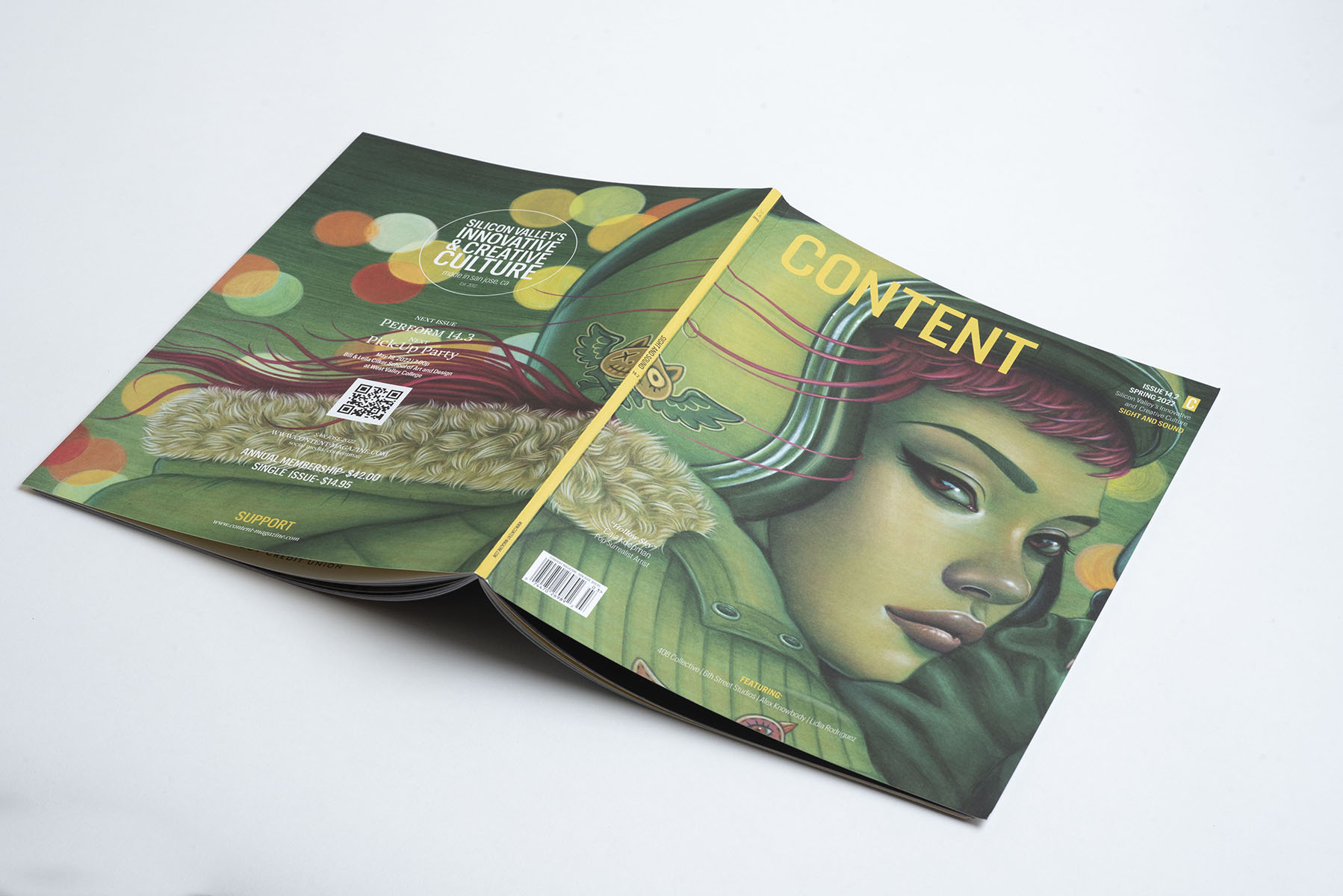