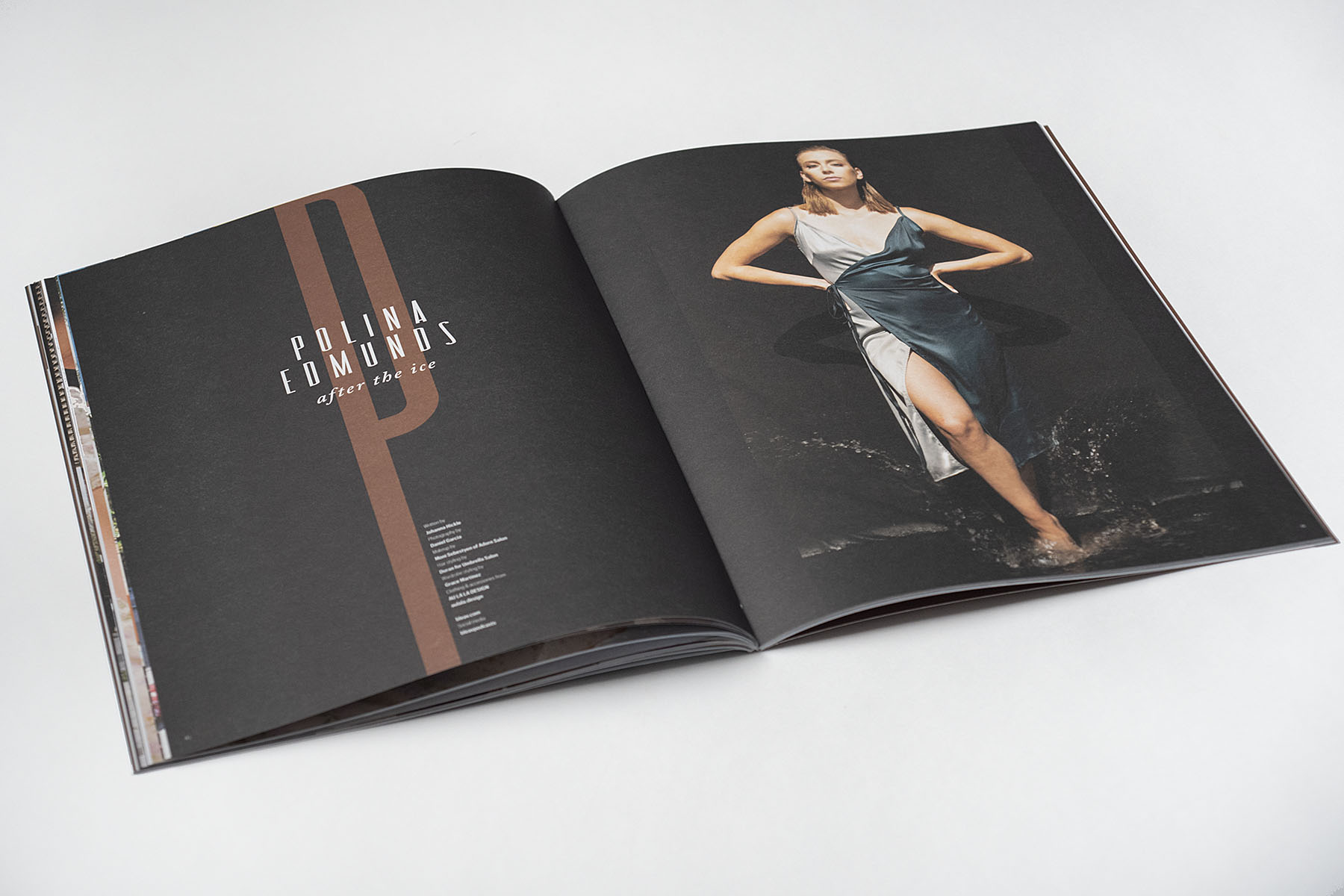 Imagine you’re stepping through the cerulean and sapphire entry of the Iceberg Skating Palace at the 2014 Sochi Olympics. By the time you’ve wandered the massive arena long enough to locate your seat, a Latin song floods the air and a willowy American’s skates have stirred to life. As she flits across the rink with a triple Lutz/triple toe loop combination and a double Axel, you can’t help but admire her airy affinity with the ice.

You’ve just met the Iron Butterfly, the ninth-placed Olympian and two-time US national silver medalist, Polina Edmunds. And while Edmunds’ nickname fits the weightless way she maneuvers across ice, there’s more to it than that.

Did you know that behind the cloak of the cocoon, caterpillars dissolve their bodies into a soup before reorganizing and reassembling themselves into a new creature? Though Edmunds’ transformation might not have called for such drastic measures, she’s overcome her own fair share of uncomfortable transitions and growing pains over the years.

Take for example the crippling mental block she faced in middle school, which left her incapable of performing jumps. “My coaches were at such a loss,” Edmunds recalls of her six-month burnout. “They tried yelling at me. They tried crying with me. They tried so many different tactics to get me to do it. And I just couldn’t.” Part of the problem was Edmunds’ longing for even a taste of normalcy. The 5am practices, after-school practices, and early bedtimes didn’t allow for much of that. But when Edmunds’ friends planned a Jamba Juice and salon trip on the last day of seventh grade, Edmunds’ mom (also one of her coaches) had an idea. She promised her daughter the day off if she could nail her jumps.

“Every time I got butterflies in my stomach, I thought about Jamba Juice,” Edmunds smiles. “That was the one word that kept replaying and replaying in my mind.” After her special girls’ day, Edmunds felt once again ready to face the rink. “It was my favorite day ever, but I came home, and I kind of had that reset where I was like, ‘That was fun. But skating makes me special—I’m going to go back.’ ”

Puberty was another rocky transition. Edmunds’ new physique meant she had to adjust to a different body balance, readjusting her poise to new proportions and relearning the muscle memory of moves. Her metabolism changed too. As a youngster, Edmunds’s big appetite was a source of pride. While other skaters religiously watched what they ate, she could polish off a big meal right before taking on the rink (something that always gained her more than a few odd looks from her competitors).

She laughs, recalling her indignation when coach David Glynn and her mom suggested she cut back on the milkshakes and pizza slices. “Eating everything you want and still being a toothpick—that was the best!” she asserts. “And all of a sudden, knowing that that’s not the case anymore and that I need to pay attention, I struggled with fully identifying with that.” It took her a whole two years to finally respect her body’s new limits.

Most recently, Edmunds has faced another pivotal transition. After rinks closed for months during the pandemic and consistent practice was no longer an option, she made the decision to retire from competitive skating. It can’t be easy to step away from the only way of life you’ve ever known.

It was at 20 months of age that Edmunds’ mom first plopped her into skates. It was at four she began lessons. By the ripe age of five, she earned the lead role in a skating performance as the audacious Pippi Longstocking. “My mom put pipe cleaners in my hair, braided them, spray-painted them orange,” she recalls. Edmunds has fond memories of her dad encouraging her with gifts. “Whenever I won first place when I was growing up, my dad would take me to Toys R Us, and I would get to pick out a doll…I ended up having like 20 Cabbage Patch kids!”

For Edmunds, the rink echoes with countless memories and thousands of hours of hard work. It has been the site of adrenaline-charged performances, new friends, and daring feats. To say it contains a large chunk of her identity is an understatement. “It was really emotional,” Edmunds told a reporter at NBC Sports about deciding whether or not to retire. “Every time I talked about it, I would start to cry, just because I couldn’t fathom the idea of stopping.”

But here’s the thing about stories—one chapter must end before the next can start.

One of the first transitions Edmunds made in retirement was taking the sudden lack of structure and finding a new rhythm. In less than a week of her big announcement, she started her own podcast, Bleav in Figure Skating. After gaining confidence and credibility by sharing her own journey across several episodes, she began interviewing big names like gold medal Olympians Kristi Yamaguchi and Brian Boitano. With hopes of one day becoming a sportscaster, it’s a fantastic first step for her future.

As she switches from interviewee to interviewer, Edmunds hopes she can enrich the interactions between media and athletes. “[As a skater,] I found that whenever I did the typical interview with NBC or wherever, the questions were pretty much the same and there wasn’t a whole lot of depth to the conversation…as athletes, we kind of all get the same questions.”

To counteract this, she creates a safe space for her guests by letting them know she can relate. “I try to include my own personal experiences and make it conversational,” she says. “And it ends up honestly feeling a lot like a therapy session…I need to start calling it Therapy With Polina!”

She also gets specific, focusing on niche angles rather than overarching careers, like discussing Gracie Gold’s struggle to regain skills and consistency in the rink after her hiatus. Or reflecting on eating disorders with Rachael Flatt, who studied the subject at Stanford after watching many athletic peers fall victim. Beyond the podcast, Edmunds has started hosting seminars for young skaters about mental training, nutrition, and other key topics regarding the sport.

Edmunds’ graceful shift from one sphere to the next carries the same fluidity as her movements across ice. It’s been a year since her retirement, and this new season looks good on her. She’s done away with her long locks for a stylish, new haircut. She’s shed the braces of her youth and gained a few healthy pounds that compliment her face and figure. The winged pendent of her necklace clinches it—the Iron Butterfly is alive and well.