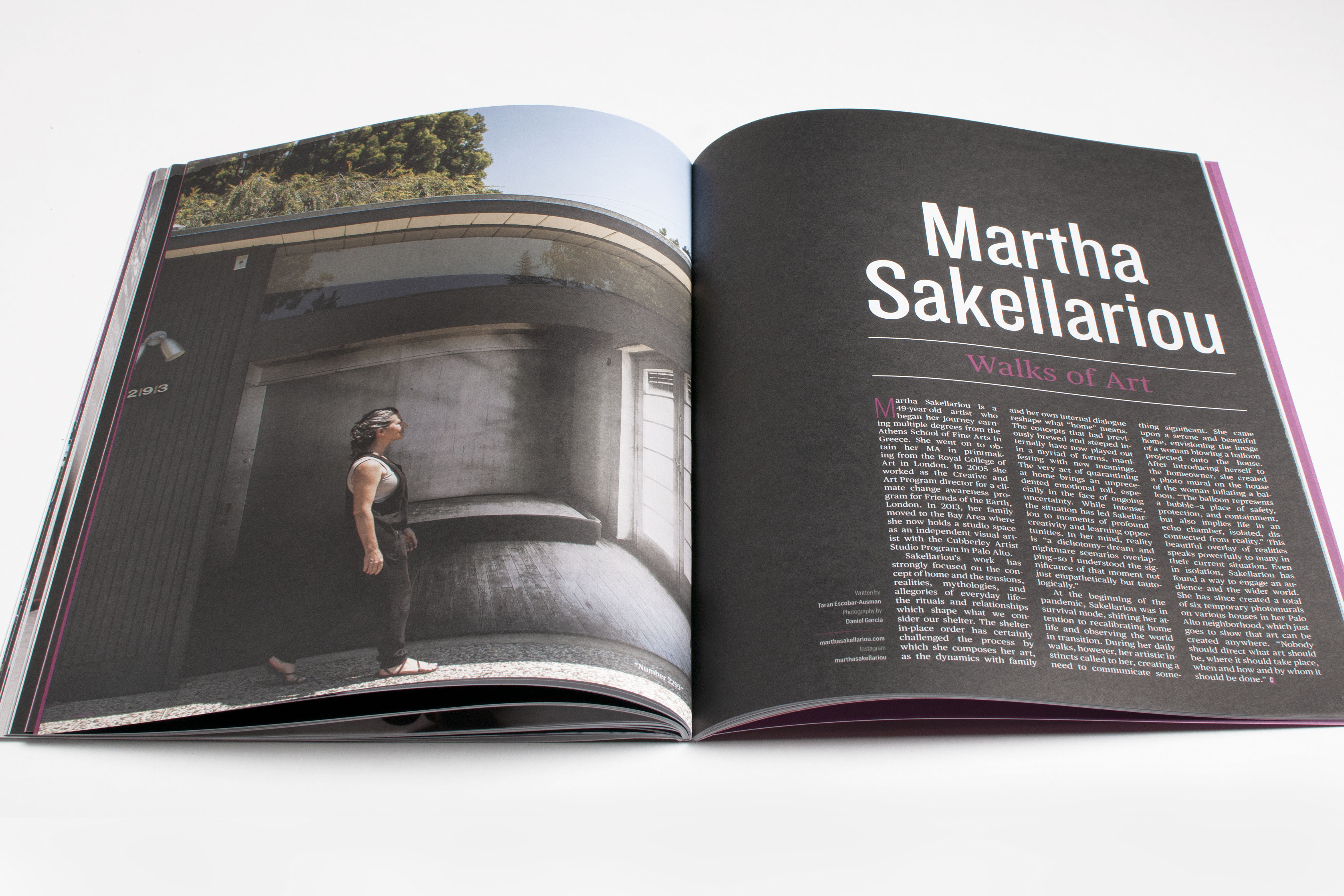 Martha Sakellariou is a 49-year-old artist who began her journey earning multiple degrees from the Athens School of Fine Arts in Greece. She went on to obtain her MA in printmaking from the Royal College of Art in London. In 2005 she worked as the Creative and Art Program director for a climate change awareness program for Friends of the Earth, London. In 2013, her family moved to the Bay Area where she now holds a studio space as an independent visual artist with the Cubberley Artist Studio Program in Palo Alto.

Sakellariou’s work has strongly focused on the concept of home and the tensions, realities, mythologies, and allegories of everyday life—the rituals and relationships which shape what we consider our shelter. The shelter-in-place order has certainly challenged the process by which she composes her art, as the dynamics with family and her own internal dialogue reshape what “home” means. The concepts that had previously brewed and steeped internally have now played out in a myriad of forms, manifesting with new meanings. The very act of quarantining at home brings an unprecedented emotional toll, especially in the face of ongoing uncertainty. While intense, the situation has led Sakellariou to moments of profound creativity and learning opportunities. In her mind, reality is “a dichotomy—dream and nightmare scenarios overlapping—so I understood the significance of that moment not just empathetically but tautologically.”

“Nobody should direct what art should be, where it should take place, when and how and by whom it should be done.”_Martha Sakellariou

At the beginning of the pandemic, Sakellariou was in survival mode, shifting her attention to recalibrating home life and observing the world in transition. During her daily walks, however, her artistic instincts called to her, creating a need to communicate something significant. She came upon a serene and beautiful home, envisioning the image of a woman blowing a balloon projected onto the house. After introducing herself to the homeowner, she created a photo mural on the house of the woman inflating a balloon. “The balloon represents a bubble—a place of safety, protection, and containment, but also implies life in an echo chamber, isolated, disconnected from reality.” This beautiful overlay of realities speaks powerfully to many in their current situation. Even in isolation, Sakellariou has found a way to engage an audience and the wider world. She has since created a total of six temporary photomurals on various houses in her Palo Alto neighborhood, which just goes to show that art can be created anywhere. “Nobody should direct what art should be, where it should take place, when and how and by whom it should be done.”