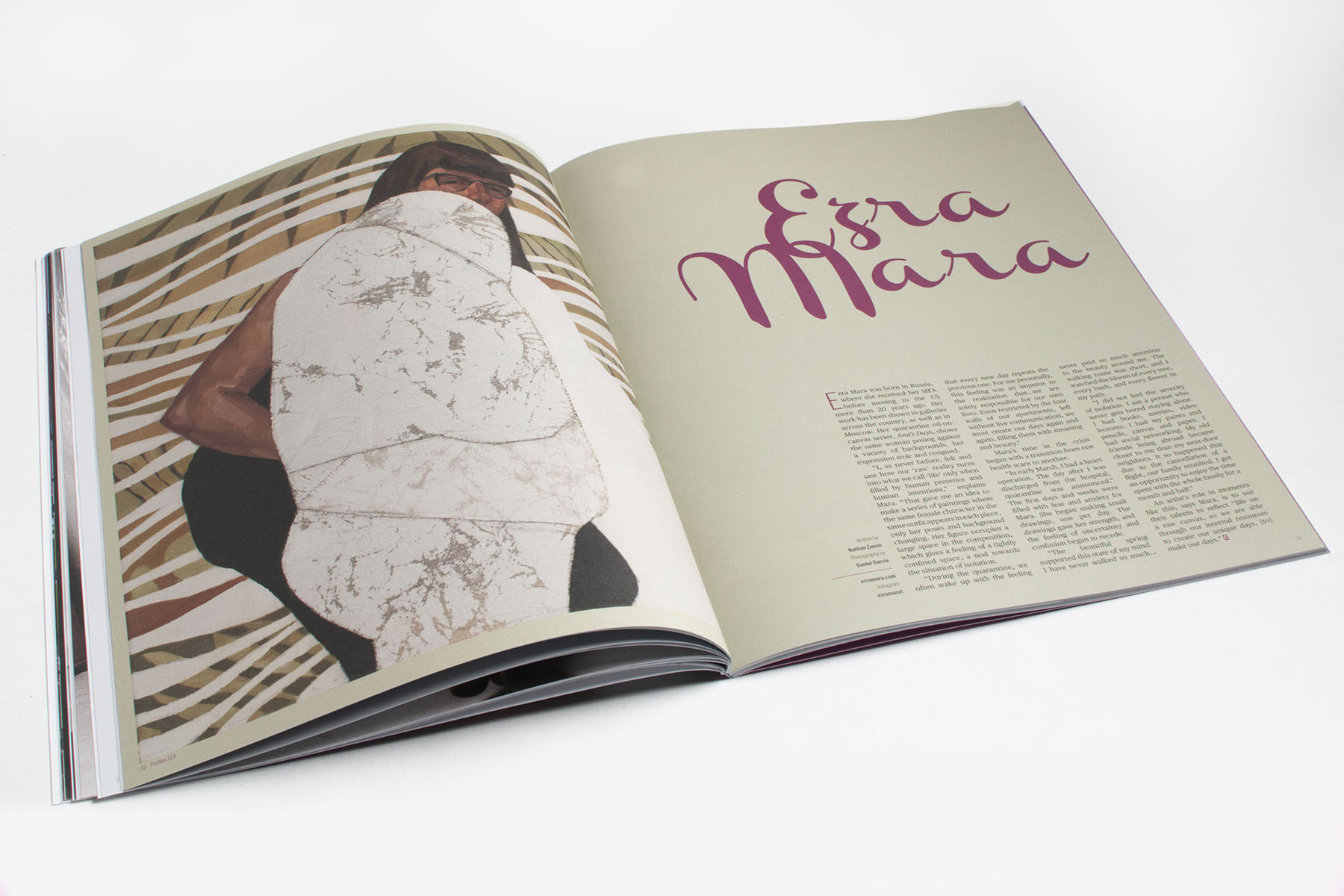 Ezra Mara was born in Russia, where she received her MFA before moving to the US more than 20 years ago. Her work has been shown in galleries across the country, as well as in Moscow. Her quarantine oil-on-canvas series, Ana’s Days, shows the same woman posing against a variety of backgrounds, her expression stoic and resigned.

“I, as never before, felt and saw how our ‘raw’ reality turns into what we call ‘life’ only when filled by human presence and human intentions,” explains Mara. “That gave me an idea to make a series of paintings where the same female character in the same outfit appears in each piece, only her poses and background changing. Her figure occupies a large space in the composition, which gives a feeling of a tightly confined space, a nod towards the situation of isolation.

“During the quarantine, we often wake up with the feeling that every new day repeats the previous one. For me personally, this feeling was an impetus to the realization that…we are solely responsible for our own lives. Even restricted by the four walls of our apartments, left without live communication, we must create our days again and again, filling them with meaning and beauty.”

Mara’s time in the crisis began with a transition from one health scare to another.

“In early March, I had a heart operation. The day after I was discharged from the hospital, quarantine was announced.” The first days and weeks were filled with fear and anxiety for Mara. She began making small drawings, one per day. The drawings gave her strength, and the feeling of uncertainty and confusion began to recede.

“The beautiful spring supported this state of my mind. I have never walked so much…never paid so much attention to the beauty around me. The walking route was short, and I watched the bloom of every tree, every bush, and every flower in my path.

“I did not feel the severity of isolation. I am a person who never gets bored staying alone. I had books, movies, video lectures. I had my paints and pencils, canvas and paper. I had social networking. My old friends living abroad became closer to me than my next-door neighbors. It so happened that due to the cancellation of a flight, our family reunited. I got an opportunity to enjoy the time spent with the whole family for a month and half.”

An artist’s role in moments like this, says Mara, is to use their talents to reflect “life on a raw canvas, so we are able through our internal resources to create our unique days, [to] make our days.”