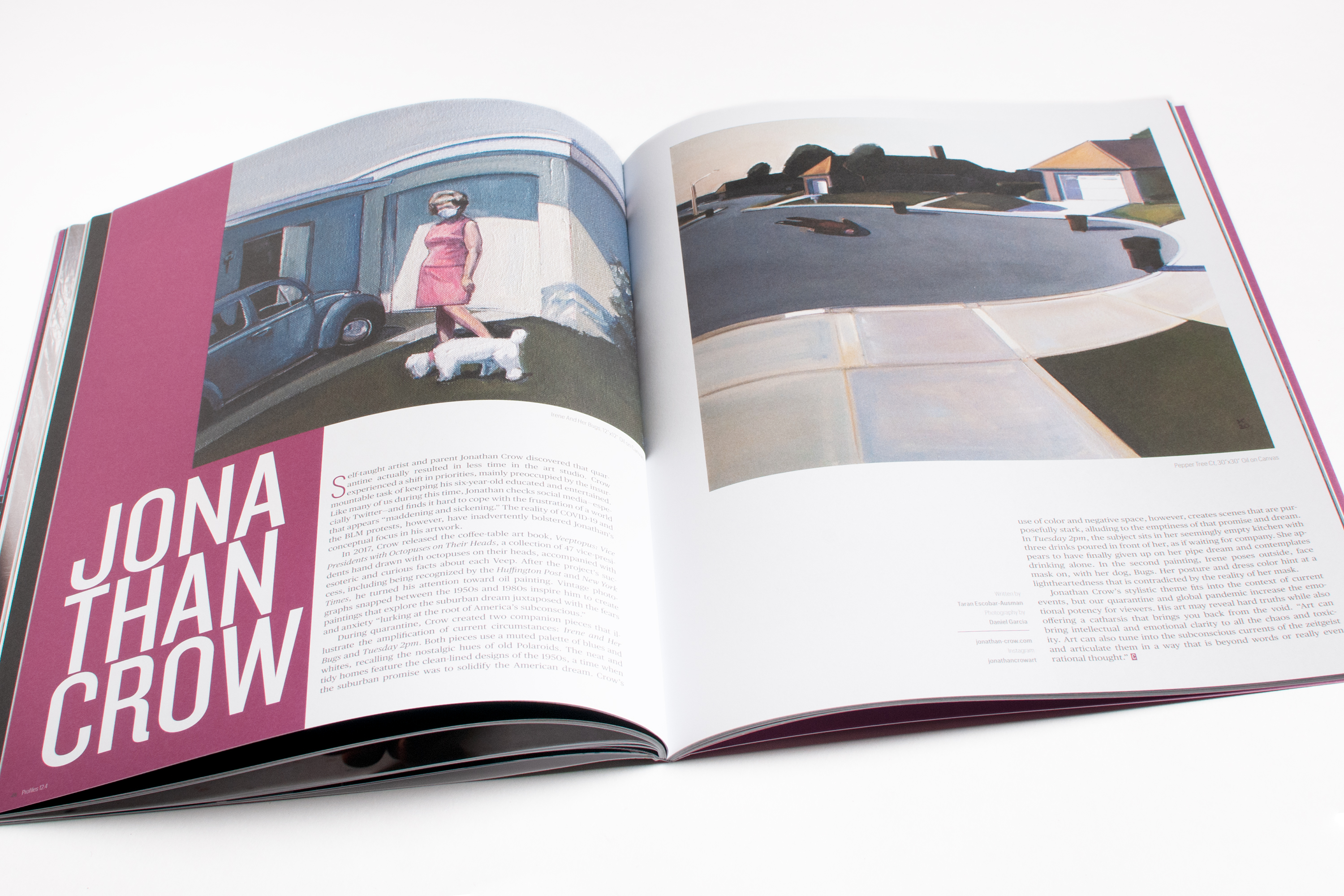 Self-taught artist and parent Jonathan Crow discovered that quarantine actually resulted in less time in the art studio. Crow experienced a shift in priorities, mainly preoccupied by the insurmountable task of keeping his six-year-old educated and entertained. Like many of us during this time, Jonathan checks social media—especially Twitter—and finds it hard to cope with the frustration of a world that appears “maddening and sickening.” The reality of COVID-19 and the BLM protests, however, have inadvertently bolstered Jonathan’s conceptual focus in his artwork.

In 2017, Crow released the coffee-table art book, Veeptopus: Vice Presidents with Octopuses on Their Heads, a collection of 47 vice-presidents hand drawn with octopuses on their heads, accompanied with esoteric and curious facts about each Veep. After the project’s success, including being recognized by the Huffington Post and New York Times, he turned his attention toward oil painting. Vintage photographs snapped between the 1950s and 1980s inspire him to create paintings that explore the suburban dream juxtaposed with the fears and anxiety “lurking at the root of America’s subconscious.”

During quarantine, Crow created two companion pieces that illustrate the amplification of current circumstances: Irene and Her Bugs and Tuesday 2pm. Both pieces use a muted palette of blues and whites, recalling the nostalgic hues of old Polaroids. The neat and tidy homes feature the clean-lined designs of the 1950s, a time when the suburban promise was to solidify the American dream. Crow’s use of color and negative space, however, creates scenes that are purposefully stark, alluding to the emptiness of that promise and dream. In Tuesday 2pm, the subject sits in her seemingly empty kitchen with three drinks poured in front of her, as if waiting for company. She appears to have finally given up on her pipe dream and contemplates drinking alone. In the second painting, Irene poses outside, face mask on, with her dog, Bugs. Her posture and dress color hint at a lightheartedness that is contradicted by the reality of her mask.

Jonathan Crow’s stylistic theme fits into the context of current events, but our quarantine and global pandemic increase the emotional potency for viewers. His art may reveal hard truths while also offering a catharsis that brings you back from the void. “Art can bring intellectual and emotional clarity to all the chaos and toxicity. Art can also tune into the subconscious currents of the zeitgeist and articulate them in a way that is beyond words or really even
rational thought.”