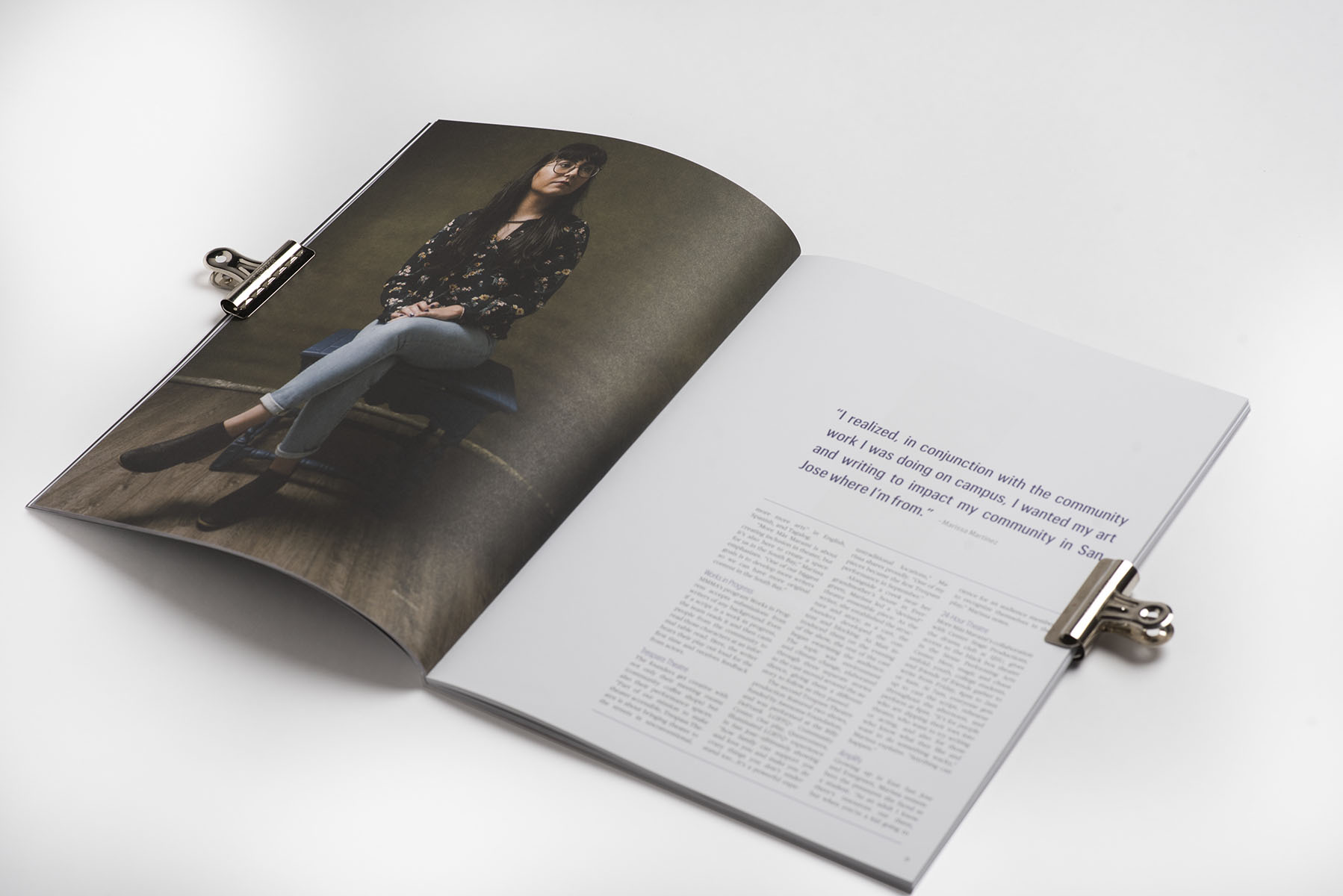 It the age of 12, Marissa Martinez started writing fan fiction about her favorite show, Avatar: The Last Airbender (still her favorite show to this day). Greatly invested in the storytelling and character development, especially those of her favorite characters, Toph and Katara, she joined an online community that gave her a platform to share fan fiction for books she was reading as well.

Then someone pointed her to the International Thespian Society at Evergreen Valley High. Marissa signed up on club day and attended her first meetings straightaway. “One friend joined with me, and we started doing backstage things—sound and lights,” Marissa says. As she befriended upperclassmen, who comprised most of the club’s actors, she integrated her creative writing and explored acting. By senior year, she became the club’s president and wrote her first play.

Like the premise of John Hughes’ The Breakfast Club, Marissa’s first play features four high school students who meet in the lobby of a community college. Through their one-on-one exchanges, each student’s reason for taking classes is revealed: one needs to make up classes, one wants to get ahead, one is an overachiever, and one is unsure of the future.

“I realized, in conjunction with the community work I was doing on campus, I wanted my art and writing to impact my community in San Jose where I’m from.” -Marissa Martinez

Completely student written, directed, and acted, Marissa’s debut play launched her future playwriting endeavors. At Santa Clara University, where she majored in theater and English, Marissa developed short one-act plays and focused her intentions as a playwright. “I realized, in conjunction with the community work I was doing on campus, I wanted my art and writing to impact my community in San Jose where I’m from,” Marissa says. “After that, I wasn’t even interested in going anywhere. I just wanted to be here.”

As a younger writer she had dreamed of starting a theater company. Her passion and skill were affirmed when she received four grants from the university to put on her biggest play yet, Hapa Cup of Sugar. Marissa received funding from the Markkula Center for Applied Ethics, SCU Presents, the Office for Diversity and Inclusion, and the Office for Multicultural Learning to cover media purchases, workshop fees, props, sets, costumes, and production-team compensation.

After graduation, Marissa continued to write and collaborate with theater companies who resonated with her themes of identity and social justice. Bindlestiff Studio, the only Filipino American–centered theater in the nation, showed two of her plays in 2017 and 2019; yet the theater was located in San Francisco, far from home.

Early in 2019, Marissa stumbled upon the perfect opportunity at a genARTS workshop. “My now-friend Matt introduced himself as trying to start his own theater company, and he was looking for playwrights,” Marissa says. “So during lunch period I went to find him and asked, ‘What do I need to do to work with you?’ ”

“More Más Marami is about creating inclusion in theater, but it’s also here to create a space for us in the South Bay,” Marissa emphasizes. “One of our biggest goals is to develop more writers so we can have more original content in the South Bay.”

MMMA’s program Works in Progress accepts submissions from writers of any background. Even if a script is a work in progress, the team reads it and then casts people from the community to read those characters at an informal table read. Here, the writer hears their play out loud for the first time and receives feedback from actors.

The founders get creative with not only their meeting rooms (community coffee shops) but also their performance spaces. “Part of our mission to make theater accessible, Trespass Theatre is about bringing theater to the streets in unconventional, untraditional locations,” Marissa shares proudly. “One of my pieces became the first Trespass performance in September.”

Alongside a creek near her grandmother’s house in Evergreen, Marissa led a “devised” theater ensemble piece: As the writer, she established the structure and story; as a cast, the founders developed the content and blocking. As Matt introduced them on the evening of the show, the rest of the cast began swarming the audience. The topic was environment and climate change, elaborated through three separate stories as the cast moved around the audience, giving them a different story to follow as they passed.

The second Trespass Theatre production featured two shows, funded by Awesome Foundation, and was performed at the Billy DeFrank LGBTQ+ Community Center. One play, Queercenera, illuminated LGBTQ+ experience in San Jose—ultimately showing “how family can support you and love you and make you do crazy things you don’t understand too…It’s a powerful experience for an audience member to recognize themselves in the play,” Marissa notes.

More Más Marami’s collaboration with Center Stage Productions, the drama club at SJSU, gives access to the black box theater in the Stone Performing Arts Center. Here, magic and chaos unfold: youth, college students, and friends of friends gather to write from Friday, 8pm to 2am or 4am. At 7am, everyone gets up to cast the script, rehearse throughout the afternoon, and perform at 8pm. “It’s for people who are dipping their toes into theater, who want to try writing or acting, and also for those who know what they like and want to do something wacky,” Marissa explains. “Anything can happen.”

Growing up in East San Jose and Evergreen, Marissa remembers the pressures she faced as a student. “As an adult I know there’s resources out there, but when you’re a kid going to a school overflowing with students and there’s only two counselors to meet with, it’s scary.” When she’s not brainstorming, coordinating, and running programs with More Más Marami, she’s working with middle and high school youth at a program called Amplify. “These students have ideas and opinions. We try to give them a platform to use their voice and to practice their arts and leadership abilities,” she sums up. The students get to work alongside other artists. “We help them in photography, creative writing, and
communication.”

After three years, Marissa has seen changes all across the board: “Even from the beginning of a project to the end, you can see how comfortable they become talking with others, and the friendships they make. Some of them outgrow some of our projects and processes, and they’re ready to do more outside of Amplify.”

Marissa is also the program director of Fly Pinays, a sisterhood and mentorship program of LEAD Filipino that provides educational programs focused on increasing Filipina representation in civic leadership (Leadership, Education Advocacy, Dialogue). In her third year of involvement with LEAD, Marissa aims to bring high school students to the 2020 Fly Pinays Leadership Summit, exposing them to these resources and discussions.

Ultimately, Marissa finds her motivation in the people she works for, whether through artistic programs or mentorship—from including neighbors who rarely see theater, to finding others who love the arts, who love to write, who are Pinay like herself. “We’re all stronger in communities together as one,” she says. “We
have to stick together.”