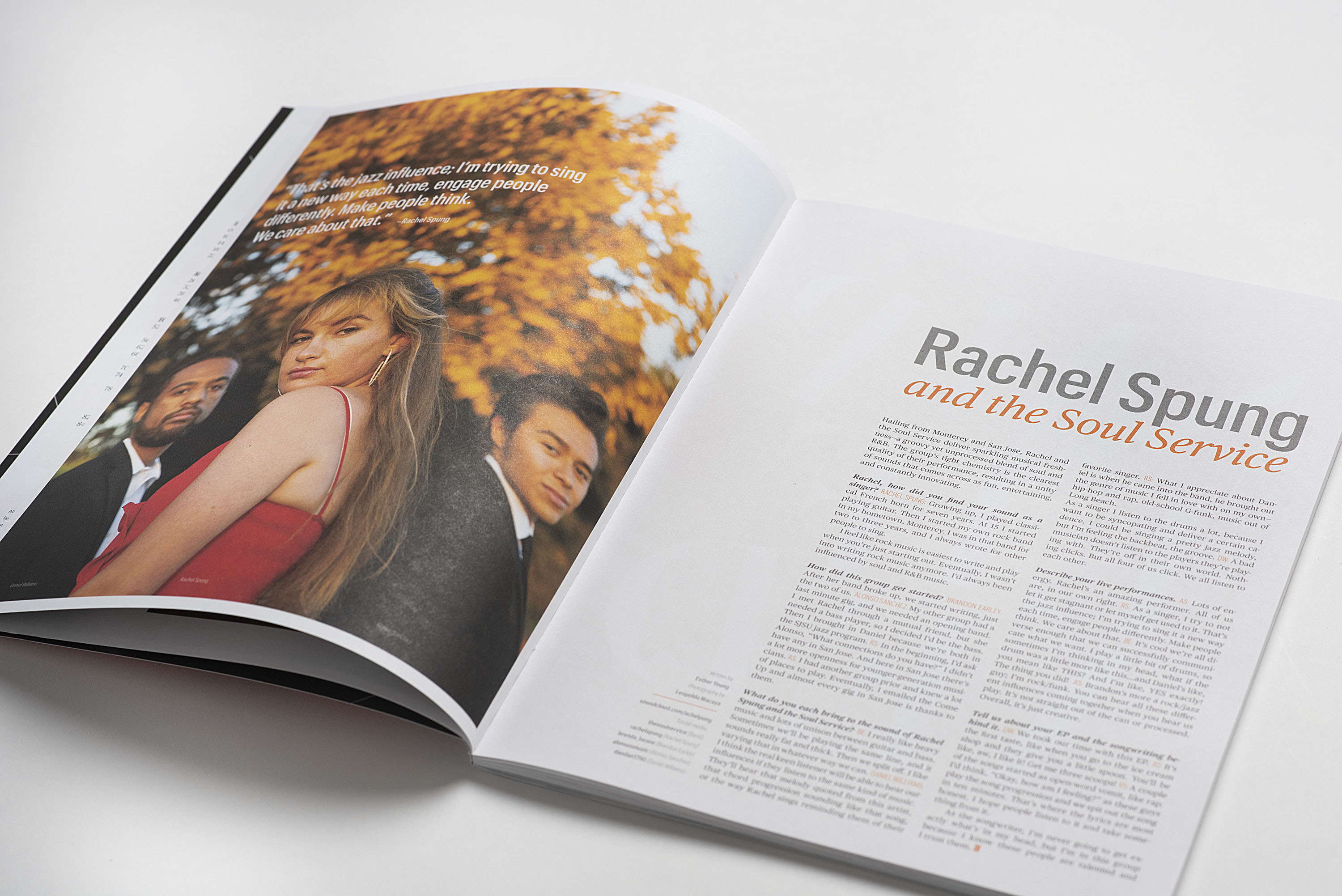 Hailing from Monterey and San Jose, Rachel and the Soul Service deliver sparkling musical freshness—a groovy yet unprocessed blend of soul and R&B. The group’s tight chemistry is the clearest quality of their performance, resulting in a unity of sounds that comes across as fun, entertaining, and constantly innovating.

Rachel, how did you find your sound as a singer? Rachel Spung: Growing up, I played classical French horn for seven years. At 15 I started playing guitar. Then I started my own rock band in my hometown, Monterey. I was in that band for two to three years, and I always wrote for other
people to sing.

I feel like rock music is easiest to write and play when you’re just starting out. Eventually, I wasn’t into writing rock music anymore. I’d always been influenced by soul and R&B music.

How did this group get started? Brandon Earley: After her band broke up, we started writing, just the two of us. Alonso Sanchez: My other group had a last minute gig, and we needed an opening band. I met Rachel through a mutual friend, but she needed a bass player, so I decided I’d be the bass. Then I brought in Daniel because we’re both in the SJSU jazz program. RS: In the beginning, I’d ask Alonso, “What connections do you have?” I didn’t have any in San Jose. And here in San Jose there’s a lot more openness for younger-generation musicians. AS: I had another group prior and knew a lot of places to play. Eventually, I emailed the Come Up and almost every gig in San Jose is thanks to them.

"That’s the jazz influence; I’m trying to sing it a new way each time, engage people differently. Make people think.
We care about that." - Rachel Spung

What do you each bring to the sound of Rachel Spung and the Soul Service?  BE: I really like heavy music and lots of unison between guitar and bass. Sometimes we’ll be playing the same line, and it sounds really fat and thick. Then we split off. I like varying that in whatever way we can. Daniel Williams: I think the real keen listener will be able to hear our influences if they listen to the same kind of music. They’ll hear that melody quoted from this artist, that chord progression sounding like that song, or the way Rachel sings reminding them of their favorite singer. RS: What I appreciate about Daniel is when he came into the band, he brought out the genre of music I fell in love with on my own—hip-hop and rap, old-school G-funk, music out of
Long Beach.

As a singer I listen to the drums a lot, because I want to be syncopating and deliver a certain cadence. I could be singing a pretty jazz melody, but I’m feeling the backbeat, the groove. DW: A bad musician doesn’t listen to the players they’re playing with. They’re off in their own world. Nothing clicks. But all four of us click. We all listen to
each other.

Describe your live performances. AS: Lots of energy. Rachel’s an amazing performer. All of us are, in our own right. RS: As a singer, I try to not let it get stagnant or let myself get used to it. That’s the jazz influence; I’m trying to sing it a new way each time, engage people differently. Make people think. We care about that. BE: It’s cool we’re all diverse enough that we can successfully communicate what we want. I play a little bit of drums, so sometimes I’m thinking in my head, what if the drum was a little more like this…and Daniel’s like, you mean like THIS? And I’m like, YES exactly! The thing you did!  AS: Brandon’s more a rock/jazz guy; I’m rock/funk. You can hear all these different influences coming together when you hear us play. It’s not straight out of the can or processed. Overall, it’s just creative.

Tell us about your EP and the songwriting behind it. DW: We took our time with this EP. AS: It’s the first taste, like when you go to the ice cream shop and they give you a little spoon. You’ll be like, aw, I like it! Get me three scoops! RS: A couple of the songs started as open-word vomit, like rap. I’d think, “Okay, how am I feeling?” as these guys play the song progression and we spit out the song in ten minutes. That’s where the lyrics are most honest. I hope people listen to it and take something from it.

As the songwriter, I’m never going to get exactly what’s in my head, but I’m in this group because I know these people are talented and
I trust them.