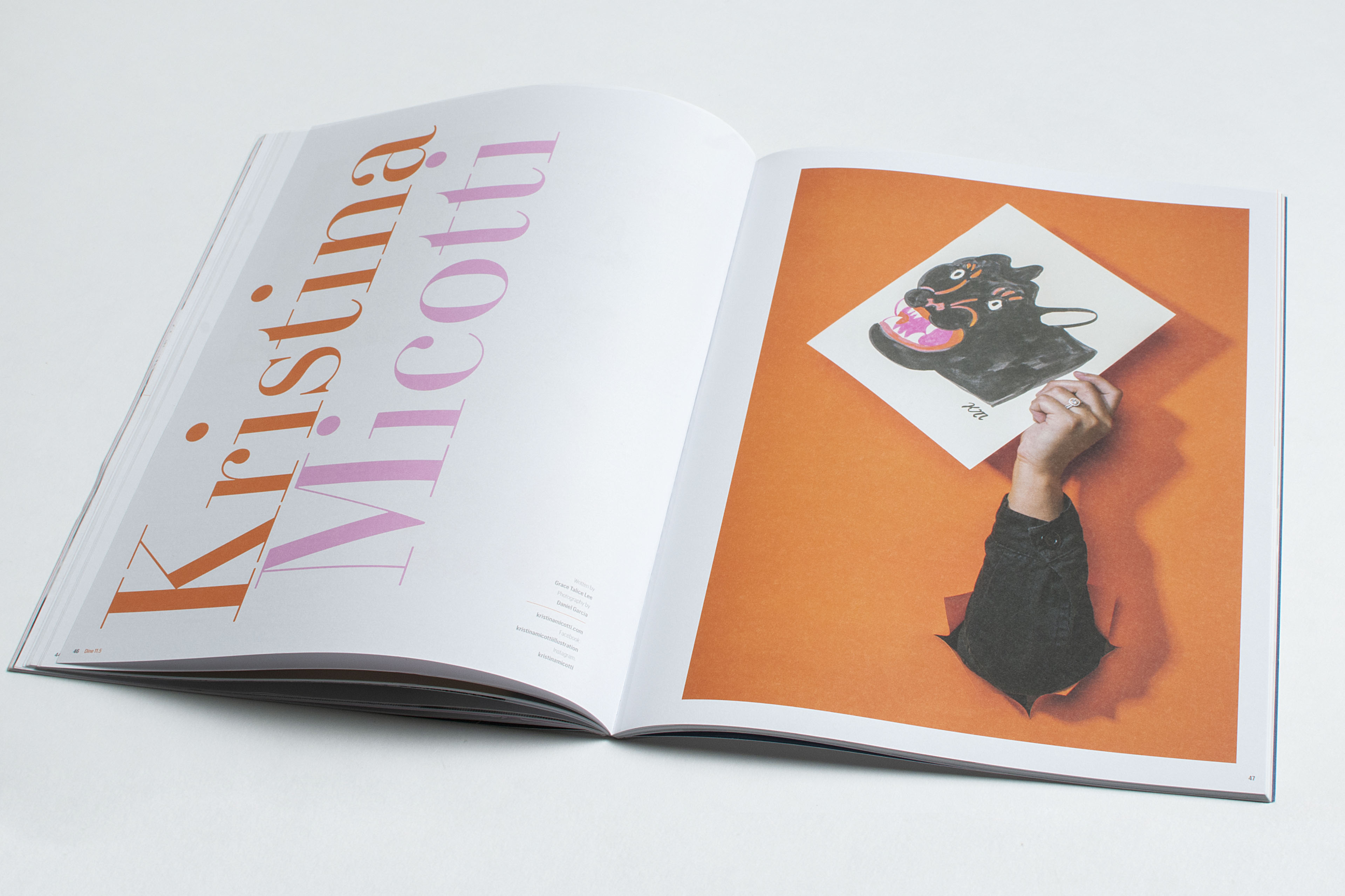 What kinds of people become full-time artists? Sometimes it’s the kind that meticulously plotted their futures, enlisting in daily portfolio camps and yearly summer intensives. Other times, it’s the kind—like Kristina Micotti—who let their careers evolve naturally, flowing with the course of their lives, somehow winding up exactly where they wanted to be. In every way Micotti interacts with her creative practice—whether in choosing it, developing it, or taking it full-time—Micotti proves that you don’t always need to plan. Sometimes it just works out.

Micotti didn’t start college as an art major; she didn’t even take art classes in high school. She focused, instead, on swimming and water polo as a teenager and made drawings purely for fun, making her friends laugh with cartoons, birthday cards, and caricatures of teachers (hidden carefully in her backpack so they would never find out).

The most formative art training she received in her youth actually took place when she was a kindergartener, rollerblading to lessons at a neighborhood woman’s house. The classes were fun, but Micotti’s deepest impression of the experience came from the gallery shows at sessions’ end. “I remember feeling really special, really cool,” she said of the exhibits. “Because, when do you ever see your art in a frame when you’re six or seven?”

When it came time for Micotti to pick a college, she stumbled into San Francisco State as a communications major. It never felt right—dropping in and out of classes, struggling to find a good roommate—until she tagged along to a friend’s orientation in the School of Art. That room of painters, printmakers, and photographers was like a lightning clap for Micotti. She said of the moment, “I realized this is where I’d love to be—this is what I want to do. I feel like when you’re around other creatives, you speak the same language, and you instantly click in. You just instantly know when you meet someone else like that.”

“I feel like when you’re around other creatives, you speak the same language, and you instantly click in. You just instantly know when you meet someone else like that.”

Shortly after finding her calling, Micotti transferred to Point Loma in San Diego as a graphic design major. She took Drawing 1 with classmates who had a much more formal art education—but she was never intimidated by it. In fact, it became an advantage. “Since I didn’t have traditional training, my style was more developed than other students starting out,” said Micotti. “I kind of just found my own style from how I drew and developed from there. That’s what set me apart a little bit from traditional fine art.”

Attending Point Loma soon revealed a huge perk—a study-abroad program called Euroterm that toured England, France, Germany, and Italy. Micotti and her friends took figure drawing courses in Paris and art history lessons in Florence—studying Michelangelo’s sculptures and Giotto’s bell tower during lecture and then tracking down these masterpieces after class to admire them in person. From the trip, Micotti received a deeper appreciation of creative craft, a clearer vision of her own aesthetic, and memories she’ll treasure forever. She said, “Basically, all we did was hang out, look at art all day, then draw in sketchbooks at pubs and coffee shops. A hipster dream!”

Upon returning stateside, Micotti threw herself into her studio courses, streamlined her style with cleaner shapes and lines, and found a reputation within her program as an artist to watch. She put in endless late nights on two illustrated series—one on the birds of the Tijuana estuary and another on folk heroes such as Paul Bunyan and Calamity Jane. She prepared not just for graduation, but also for a portfolio review by the American Institute of Graphic Arts—a prestigious event somewhat like a science fair, in which judges browse work, provide feedback, and give awards. “[I was] so nervous, so sweaty,” said Micotti. “It was very competitive. But I’m still proud of the work I did.” And she should be—because her efforts nabbed the prize for best illustration and kick-started the rest of her career.

Since winning the portfolio review in 2012, Micotti’s creative path has become paved with offers—on each of which she focused single-mindedly to turn every opportunity into a triumph.

The hype from that best illustration award led to her first solo show at Subtext Gallery in San Diego’s Little Italy, where she exhibited a dozen paintings and pen drawings featuring her favorite jazz singers. She worked around the clock to produce these pieces, dedicating all her time and energy to pump out top quality work. It paid off, of course, with a smash hit opening—multiple pieces sold and even more buzz generated about her talent. Somehow, Micotti did not expect such positive reception. “It was crazy; it was pretty surreal,” she said. “I’m just not used to that attention. That attention kind of freaks me out a little bit.”

In 2013, Micotti moved back to the Bay Area and started participating in San Francisco’s Renegade Craft Fair—a curated marketplace where hundreds of artists vend their work to thousands (upon thousands) of guests. She stocked her booth with prints of her birds and folk heroes from college but found that her meticulous renderings of Paul Bunyan and Calamity Jane wouldn’t move off the shelves. She also happened to display some quick paintings of dogs—spur-of-the-moment pieces, just to fill out her table a little bit. And these sketches sold out almost immediately. This changed everything for Micotti. She said, “I could draw something for 10 seconds rather than spending hours and hours. I was able to paint spontaneously, whatever I wanted. I loved the freedom of it.” Micotti was hooked. She signed on to this new style at once and still uses it today.

Micotti’s success at art shows and craft markets only spawned more good luck for her career. She attracted clients such as FiveThirtyEight, Schoolhouse Electric, Triathlete Magazine, and the Optical Society, creating anything from lapel pins of scientists to thumbnail portraits of political bloggers. She landed wholesale deals with independent stores throughout California, such as Rare Device, Kira Kids Stores, Park Life, New Works, and Bay Made. And she held two more solo shows in May of 2019—more ink paintings of dogs in the Long Weekend, Oakland, and acrylic paintings of tigers and cheetahs in the Little Lodge, San Francisco. She even has a book coming out soon for which she did the illustrations: The Boob Book, published by Chronicle.

In the future, Micotti hopes to collaborate with bigger clients, make more home goods, and design large-scale murals for local tech companies. But really, she’s not that stressed about it. As she said herself, “I never really knew what I wanted to do with my art. I’m kind of just letting that baby grow on its own. Illustration fell in my lap because I just like doing it and that evolved into products. And then it’s still evolving, but different types of products. I’m going from a $10 pin to a $170 blanket. The products are changing and the prices are changing. I’m just letting it grow organically, just seeing where it takes me.”