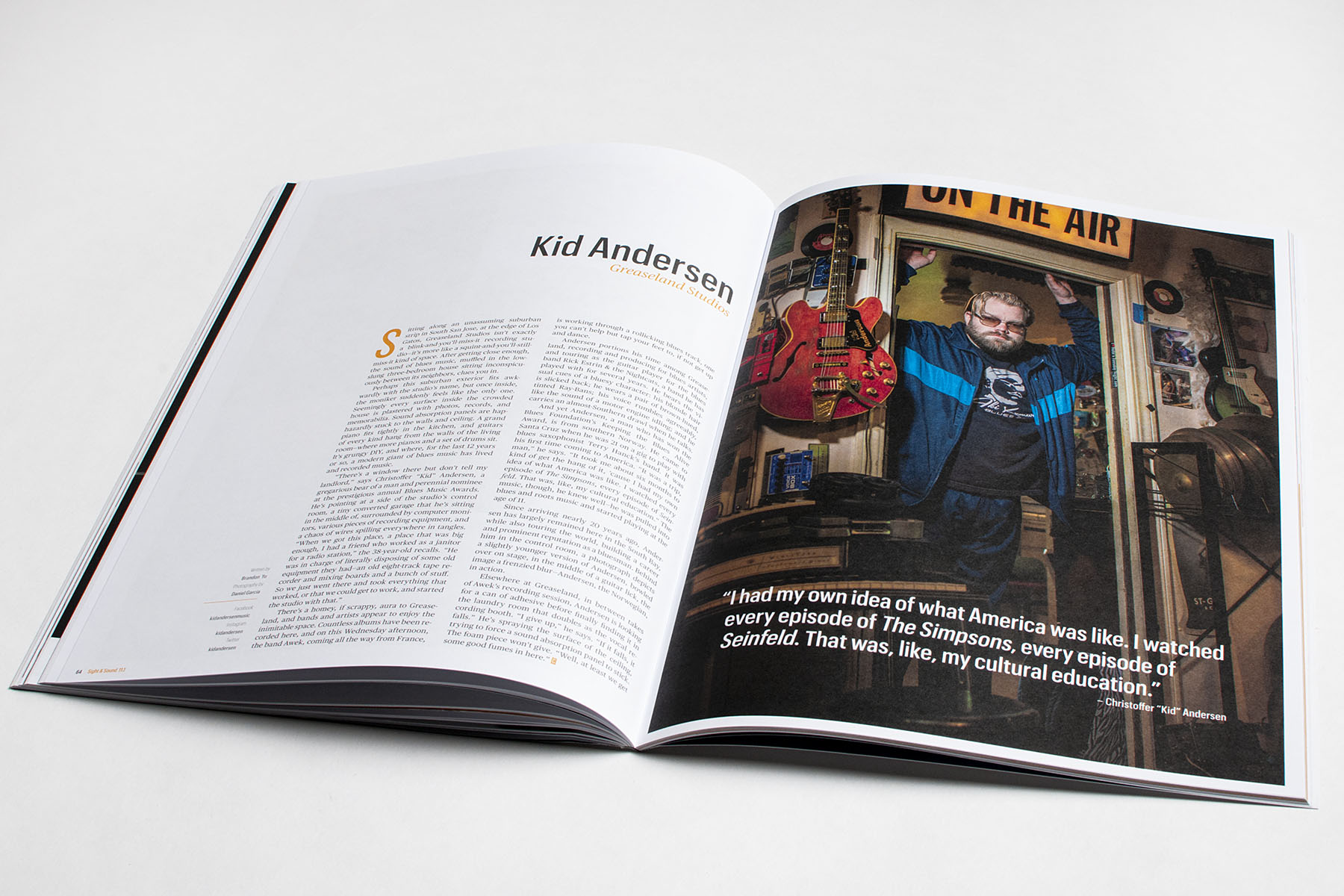 Sitting along an unassuming suburban strip in South San Jose, at the edge of Los Gatos, Greaseland Studios isn’t exactly a blink-and-you’ll-miss-it recording studio—it’s more like a squint-and-you’ll-stillmiss-it kind of space. After getting close enough, the sound of blues music, muffled in the lowslung three-bedroom house sitting inconspicuously between its neighbors, clues you in.

Perhaps this suburban exterior fits awkwardly with the studio’s name, but once inside, the moniker suddenly feels like the only one. Seemingly every surface inside the crowded house is plastered with photos, records, and memorabilia. Sound absorption panels are haphazardly stuck to the walls and ceiling. A grand piano fits tightly in the kitchen, and guitars of every kind hang from the walls of the living room—where more pianos and a set of drums sit. It’s grungy DIY, and where, for the last 12 years or so, a modern giant of blues music has lived and recorded music.

“There’s a window there but don’t tell my landlord,” says Christoffer “Kid” Andersen, a gregarious bear of a man and perennial nominee at the prestigious annual Blues Music Awards. He’s pointing at a side of the studio’s control room, a tiny converted garage that he’s sitting in the middle of, surrounded by computer monitors, various pieces of recording equipment, and a chaos of wires spilling everywhere in tangles. “When we got this place, a place that was big enough, I had a friend who worked as a janitor for a radio station,” the 38-year-old recalls. “He was in charge of literally disposing of some old equipment they had—an old eight-track tape recorder and mixing boards and a bunch of stuff. So we just went there and took everything that worked, or that we could get to work, and started the studio with that.”

There’s a homey, if scrappy, aura to Greaseland, and bands and artists appear to enjoy the inimitable space. Countless albums have been recorded here, and on this Wednesday afternoon, the band Awek, coming all the way from France, is working through a rollicking blues track, one you can’t help but tap your feet to, if not get up and dance.

Andersen portions his time among Greaseland, recording and producing for blues artists, and touring as the guitar player for the blues band Rick Estrin & the Nightcats, a band he has played with for several years. He bears the visual cues of a bluesy character: his blonde hair is slicked back; he wears a pair of brown-hued, tinted Ray-Bans; his voice rumbles agreeably, like the sound of a motor engine idling; and he carries an almost-Southern drawl when he talks.

And yet Andersen, a man who has won the Blues Foundation’s Keeping the Blues Alive Award, is from southern Norway. He came to Santa Cruz when he was 21 on a gig to play with blues saxophonist Terry Hanck’s band. It was his first time coming to America. “It was a trip, man,” he says. “It took me about six months to kind of get the hang of it, ’cause I had my own idea of what America was like. I watched every episode of The Simpsons, every episode of Seinfeld. That was, like, my cultural education.” The music, though, he knew well—he was pulled into blues and roots music and started playing at the age of 11.

Since arriving nearly 20 years ago, Andersen has largely remained here in the South Bay, while also touring the world, building a career and prominent reputation as a bluesman. Behind him in the control room, a photograph depicts a slightly younger version of Andersen, bowled over on stage, in the middle of a guitar lick, the image a frenzied blur—Andersen, the Norwegian, in action.

Elsewhere at Greaseland, in between takes of Awek’s recording session, Andersen is looking for a can of adhesive before finally finding it in the laundry room that doubles as the vocal recording booth. “I give up,” he says. “If it falls, it falls.” He’s spraying the surface of the ceiling, trying to force a sound absorption panel to stick. The foam piece won’t give. “Well, at least we get some good fumes in here.”