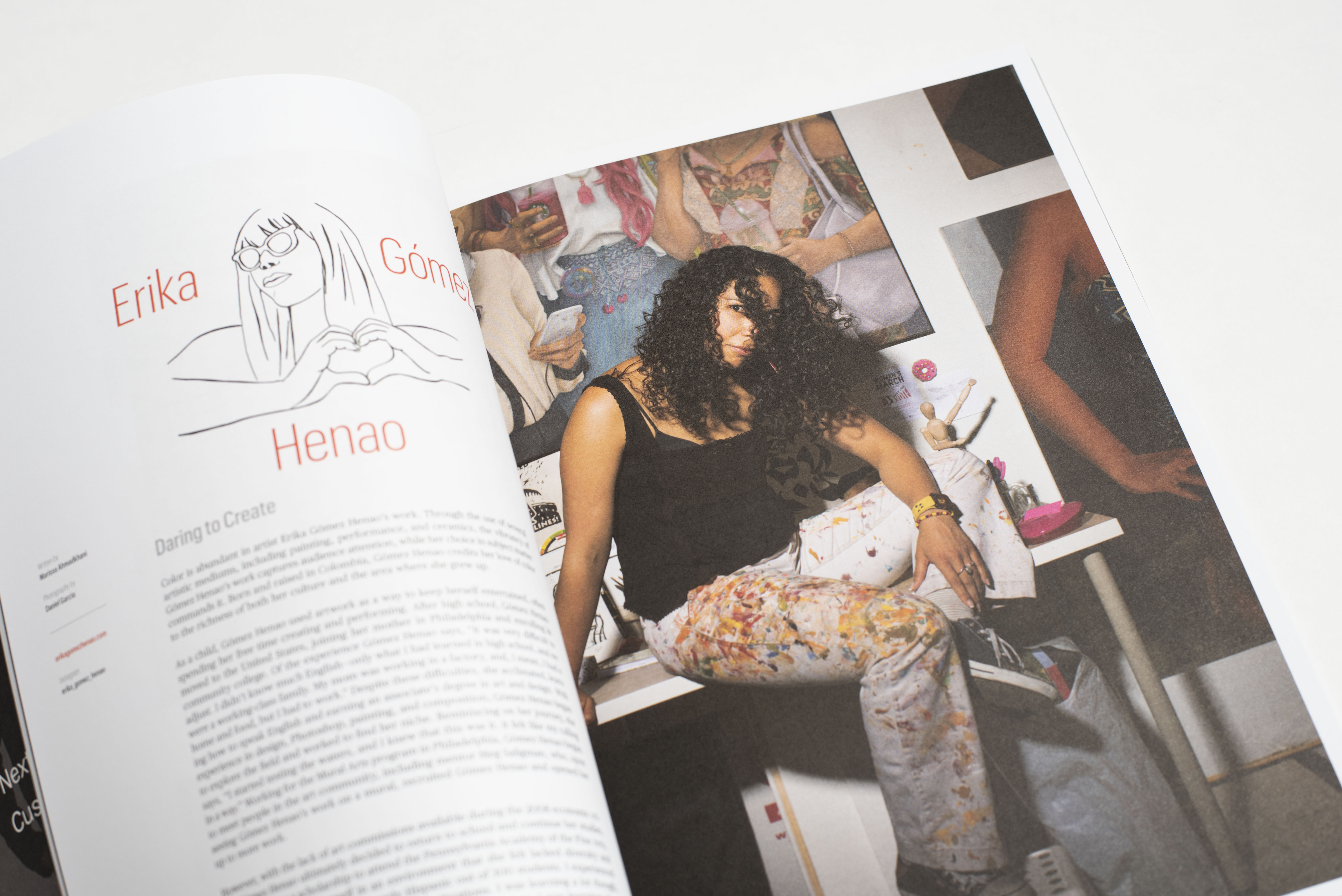 Color is abundant in artist Erika Gómez Henao’s work. Through the use of several artistic mediums, including painting, performance, and ceramics, the vibrancy of Gómez Henao’s work captures audience attention, while her choice in subject matter commands it. Born and raised in Colombia, Gómez Henao credits her love of color to the richness of both her culture and the area where she grew up.

As a child, Gómez Henao used artwork as a way to keep herself entertained, often spending her free time creating and performing. After high school, Gómez Henao moved to the United States, joining her mother in Philadelphia and enrolling in community college. Of the experience Gómez Henao says, “It was very difficult to adjust. I didn’t know much English—only what I had learned in high school, and we were a working-class family. My mom was working in a factory, and, I mean, I had a home and food, but I had to work.” Despite these difficulties, she acclimated, learning how to speak English and earning an associate’s degree in art and design. With experience in design, Photoshop, painting, and composition, Gómez Henao began to explore the field and worked to find her niche. Reminiscing on her journey, she says, “I started testing the waters, and I knew that this was it. It felt like my calling in a way.” Working for the Mural Arts program in Philadelphia, Gómez Henao began to meet people in the art community, including mentor Meg Saligman, who, upon seeing Gómez Henao’s work on a mural, recruited Gómez Henao and opened her up to more work.

However, with the lack of art commissions available during the 2008 economic crisis, Gómez Henao ultimately decided to return to school and continue her studies. Upon receiving a scholarship to attend the Pennsylvania Academy of the Fine Arts, Gómez Henao found herself in an environment that she felt lacked diversity and creative freedom. “I was like the only Hispanic out of 300 students. I experienced a lot of racism and a lot of uncomfortable situations. I was learning a lot though, and I was so passionate, especially about the human figure. I was learning about using all these colors that never even crossed my mind. It was amazing, all that I was learning. But I was unhappy,” Gómez Henao shares. Ultimately, she and her husband decided to move to California, where Gómez Henao transferred to the San Francisco Art Institute. Here, she flourished as she made lasting friendships, experienced the open, conceptual culture of her surroundings, and experimented with her own work. Once Gómez Henao graduated in 2015, she and her husband moved to San Jose, where she quickly made connections and began working at the San Jose Museum of Art, in addition to having her studio space in San Jose’s Local Color. About her life in San Jose, Gómez Henao says, “I’ve met so many incredible people. I feel super welcome here, and I really just love it. I just came back from back home—from Colombia—and I love it so much there, but I tell people that this feels
like home now.”

“I’ve had men come tell me that they’re intimidating. And, yeah, they’re kind of daring. Like, you know what? I’m not your subject to be looked at. There’s something challenging about them, and I’m definitely okay with that.” _Erika Gómez Henao

In terms of her work, Gómez Henao describes her art as an exploration of the sexualization of women in current consumerism, particularly in today’s social media culture. From her perspective as a female artist and a woman of color, she questions these often “shallow human connections” and the pervasive perception of women as fetishized objects. “I kind of stay away from the traditional, historical view of the nude female figure and what it meant, to be looked at, especially by men. My paintings are more…I don’t know. I’ve had men come tell me that they’re intimidating. And, yeah, they’re kind of daring. Like, you know what? I’m not your subject to be looked at. There’s something challenging about them, and I’m definitely okay with that,” she says laughing.

Gómez Henao explores these concepts through not only her painting and ceramic work but also through installations and performance pieces in which she uses bold colors, wigs, fabrics, and her own self-made props. Next month, Gómez Henao will be partaking in a group show, sharing paintings, a video, and a ceramic installation. The show, titled Raices y Alias, will focus on Latinx and Chicanx artists.

Since our interview in 2018, Erika has become a certified Angelic and Crystal healing practitioner and an energy healer. 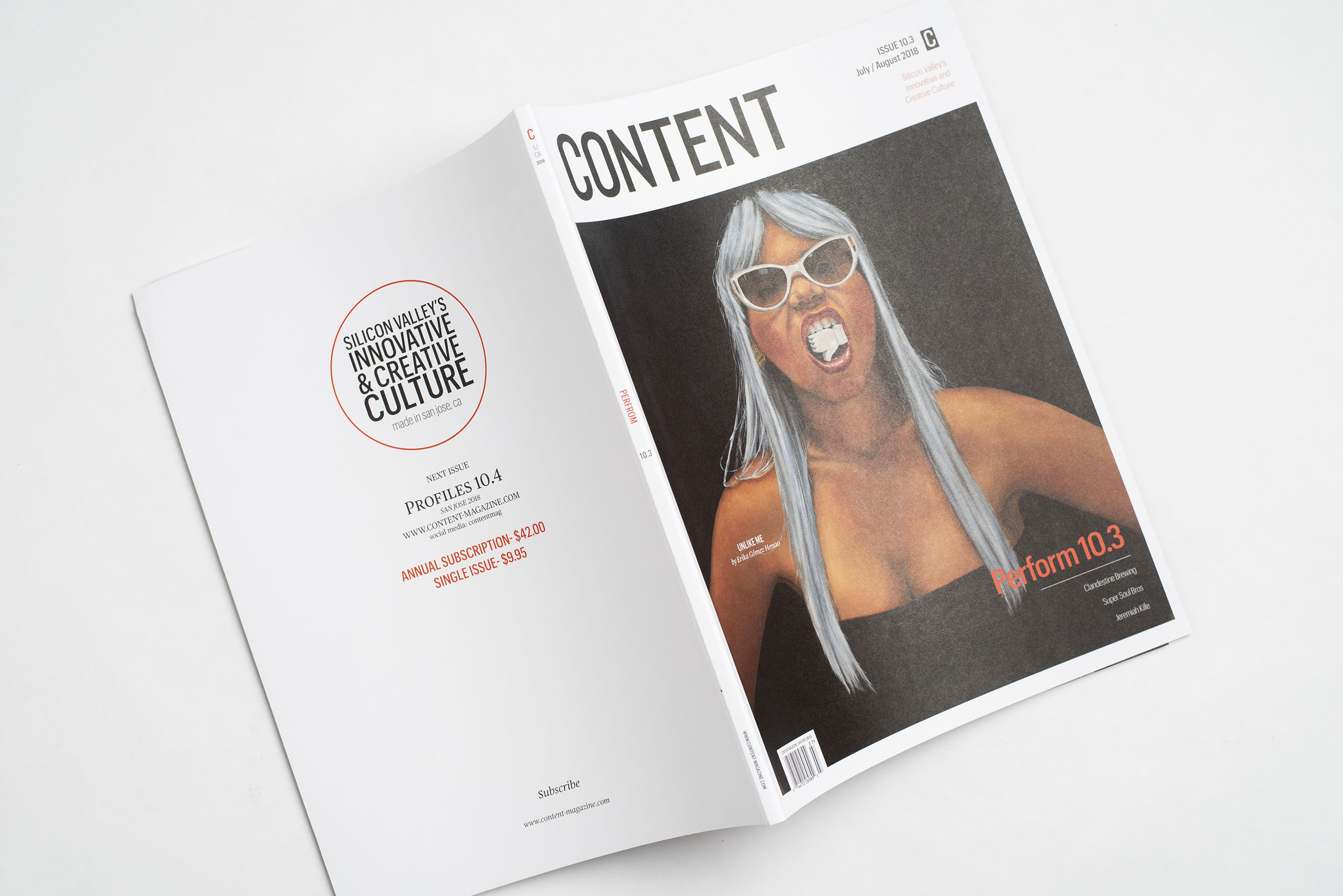