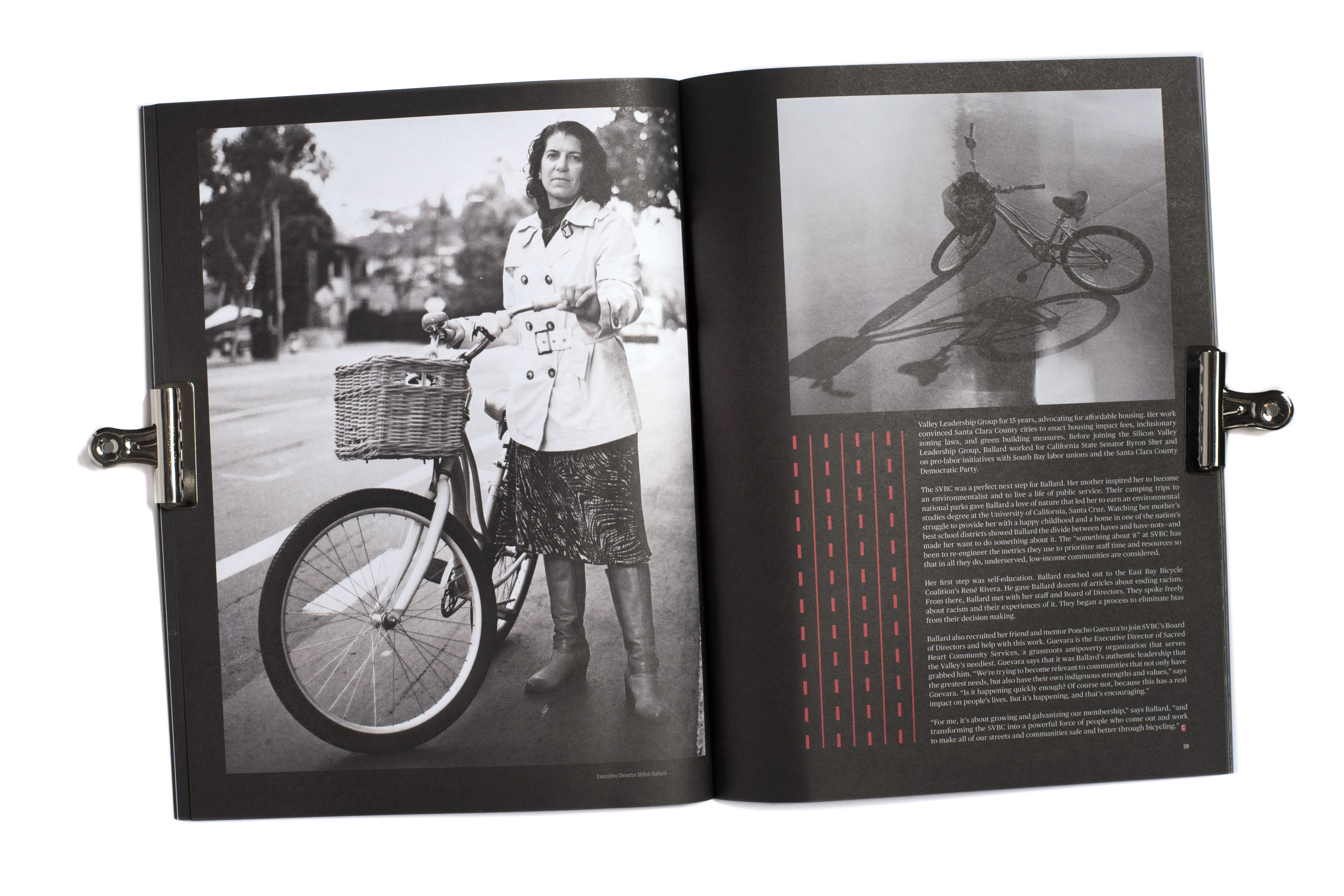 S hiloh Ballard wants to make diversity, equity, and inclusion central to Silicon Valley’s bicycle movement. Ballard is the Executive Director of Silicon Valley Bicycle Coalition (SVBC), a membership-based organization founded in 1970. If you use bicycle lanes, sharrows, public bike racks or if you bring your bike on Caltrain, BART, or VTA, thank the SVBC.

Representing underserved communities, however, wasn’t central to SVBC’s mission until Ballard met Tamika Butler, who was the Executive Director of the Los Angeles County Bicycle Coalition. Butler became one of Ballard’s mentors and helped her connect bicycle advocacy to the challenges faced by low-income communities. “If we’re supposed to be a bicycle coalition that cares about all folks,” says Butler, “then we have to realize that everyone who rides a bike isn’t just making a lifestyle decision. There are folks who depend on this mode of transportation because they have nothing else.” What advocating for safe, bikeable streets has in common with advocating for affordable housing, employment equity, and an accessible public transportation system, says Butler, is helping people who are underserved and unseen and whose voices are often disregarded.

Ballard was uncomfortable when she first heard Butler talk about transportation justice. “But after I thought about it,” says Ballard, “I knew we had work to do to make equity and inclusion more front and center in all we do.” Statistics say this work is needed. The City of San Jose’s Vision Zero program found that 50 percent of the serious bicycle and pedestrian accidents happen on 3 percent of its streets. These streets are in low-income communities like East San Jose. SVBC is helping the city reduce these accidents to zero.

“I knew we had work to do to make equity and inclusion front and center in all we do.” -Shiloh Ballard

The SVBC was a perfect next step for Ballard. Her mother inspired her to become an environmentalist and to live a life of public service. Their camping trips to national parks gave Ballard a love of nature that led her to earn an environmental studies degree at the University of California, Santa Cruz. Watching her mother’s struggle to provide her with a happy childhood and a home in one of the nation’s best school districts showed Ballard the divide between haves and have-nots—and made her want to do something about it. The “something about it” at SVBC has been to re-engineer the metrics they use to prioritize staff time and resources so that in all they do, underserved, low-income communities are considered.

Her first step was self-education. Ballard reached out to the East Bay Bicycle Coalition’s René Rivera. He gave Ballard dozens of articles about ending racism. From there, Ballard met with her staff and Board of Directors. They spoke freely about racism and their experiences of it. They began a process to eliminate bias from their decision making.

Ballard also recruited her friend and mentor Poncho Guevara to join SVBC’s Board of Directors and help with this work. Guevara is the Executive Director of Sacred Heart Community Services, a grassroots antipoverty organization that serves the Valley’s neediest. Guevara says that it was Ballard’s authentic leadership that grabbed him. “We’re trying to become relevant to communities that not only have the greatest needs, but also have their own indigenous strengths and values,” says Guevara. “Is it happening quickly enough? Of course not, because this has a real impact on people’s lives. But it’s happening, and that’s encouraging.”

“For me, it’s about growing and galvanizing our membership,” says Ballard, “and transforming the SVBC into a powerful force of people who come out and work to make all of our streets and communities safe and better through bicycling.”