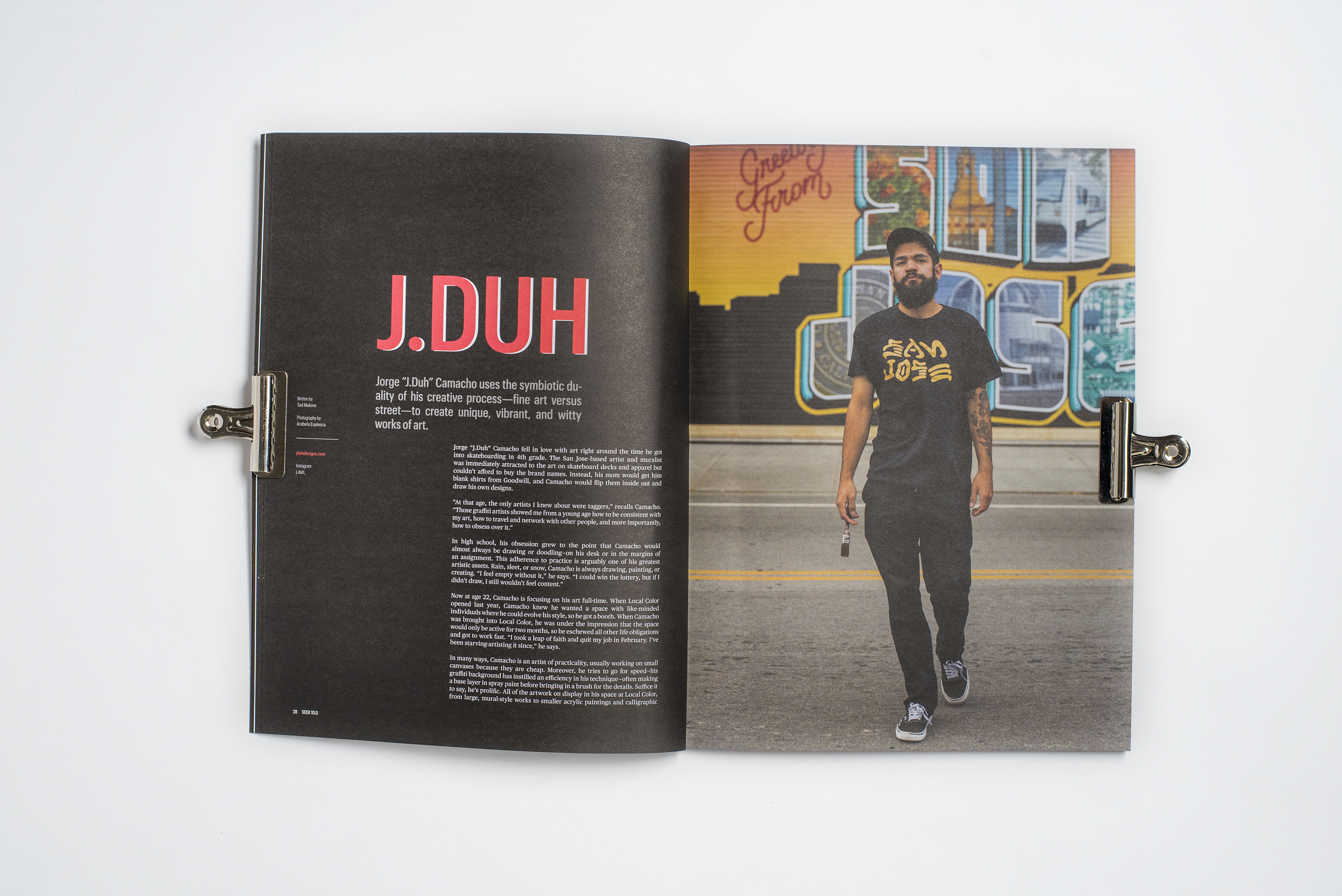 Jorge “J.Duh” Camacho fell in love with art right around the time he got into skateboarding in 4th grade. The San Jose–based artist and muralist was immediately attracted to the art on skateboard decks and apparel but couldn’t afford to buy the brand names. Instead, his mom would get him blank shirts from Goodwill, and Camacho would flip them inside out and draw his own designs.

“At that age, the only artists I knew about were taggers,” recalls Camacho. “Those graffiti artists showed me from a young age how to be consistent with my art, how to travel and network with other people, and more importantly, how to obsess over it.”

In high school, his obsession grew to the point that Camacho would almost always be drawing or doodling—on his desk or in the margins of an assignment. This adherence to practice is arguably one of his greatest artistic assets. Rain, sleet, or snow, Camacho is always drawing, painting, or creating. “I feel empty without it,” he says. “I could win the lottery, but if I didn’t draw, I still wouldn’t feel content.”

Now at age 22, Camacho is focusing on his art full-time. When Local Color opened last year, Camacho knew he wanted a space with like-minded individuals where he could evolve his style, so he got a booth. When Camacho was brought into Local Color, he was under the impression that the space would only be active for two months, so he eschewed all other life obligations and got to work fast. “I took a leap of faith and quit my job in February. I’ve been starving-artisting it since,” he says.

I feel empty without it. I could win the lottery, but if I didn’t draw, I still wouldn’t feel content.

In many ways, Camacho is an artist of practicality, usually working on small canvases because they are cheap. Moreover, he tries to go for speed—his graffiti background has instilled an efficiency in his technique—often making a base layer in spray paint before bringing in a brush for the details. Suffice it to say, he’s prolific. All of the artwork on display in his space at Local Color, from large, mural-style works to smaller acrylic paintings and calligraphic works, have been done in the last couple months, and he shows no sign of slowing down.

Camacho prefers to work with anything that’s smooth. As a self-taught artist, he uses whatever supplies he can to make his creations come to life. Often that involves spray paint, acrylic paint, and pens. Camacho’s inspiration comes from music, culture, skateboarding, and his own life experiences. While many of Camacho’s pieces are symbolic and point to greater social or cultural issues, his art is always infused with sarcastic humor. “I want to make pieces of art that make somebody laugh or feel comfortable.”

Camacho’s art also comes from a place of love. His artist moniker “J.Duh” was also his sister’s nickname. After her untimely passing, he started signing all of his work in her honor. “I think that’s one reason I obsess about my work so much, because it’s all a tribute to her,” Camacho says.

Whether he’s painting logos, selling canvases, making T-shirts, or painting murals for people or local businesses, Camacho is keeping himself afloat through his art. “I really don’t have a plan B,” he says. Besides his own personal hustle, Camacho’s work has been featured in numerous art shows across the Bay Area. His most recent show was also one he curated: The Letter Show at Local Color, which featured over 20 notable local artists interpreting the letters of the alphabet.

Camacho recently started going around to businesses he frequented and seeing if they would like murals. His enterprising idea has been a big success. Camacho has created numerous murals and installations for local companies including Bosch Appliances and C’est Si Bon Bakery. He also painted the new San Jose mural on Balbach Street next to the Convention Center.

As for the future, Jorge “J.Duh” Camacho has simple desires—he just wants to keep making art.