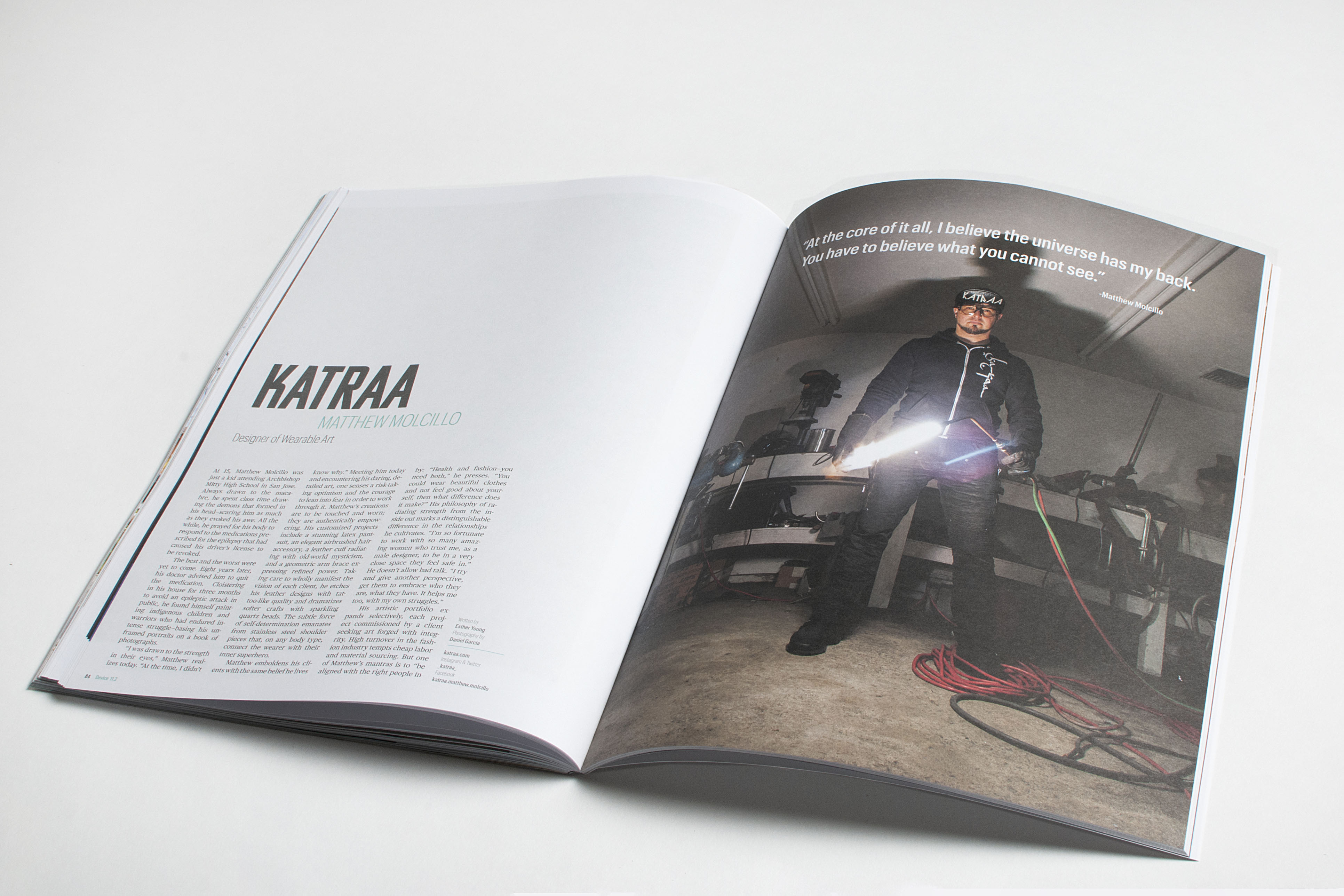 A t 15, Matthew Molcillo was just a kid attending Archbishop Mitty High School in San Jose. Always drawn to the macabre, he spent class time drawing the demons that formed in his head—scaring him as much as they evoked his awe. All the while, he prayed for his body to respond to the medications prescribed for the epilepsy that had caused his driver’s license to be revoked.

The best and the worst were yet to come. Eight years later, his doctor advised him to quit the medication. Cloistering in his house for three months to avoid an epileptic attack in public, he found himself painting indigenous children and warriors who had endured intense struggle—basing his unframed portraits on a book of photographs.

“I was drawn to the strength in their eyes,” Matthew realizes today. “At the time, I didn’t know why.” Meeting him today and encountering his daring, detailed art, one senses a risk-taking optimism and the courage to lean into fear in order to work through it. Matthew’s creations are to be touched and worn; they are authentically empowering. His customized projects include a stunning latex pantsuit, an elegant airbrushed hair accessory, a leather cuff radiating with old-world mysticism, and a geometric arm brace expressing refined power. Taking care to wholly manifest the vision of each client, he etches his leather designs with tattoo-like quality and dramatizes softer crafts with sparkling quartz beads. The subtle force of self-determination emanates from stainless steel shoulder pieces that, on any body type, connect the wearer with their inner superhero.

Matthew emboldens his clients with the same belief he lives by. “Health and fashion—you need both,” he presses. “You could wear beautiful clothes and not feel good about yourself. Then what difference does it make?” His philosophy of radiating strength from the inside out marks a distinguishable difference in the relationships he cultivates. “I’m so fortunate to work with so many amazing women who trust me, as a male designer, to be in a very close space they feel safe in.” He doesn’t allow bad talk. “I try and give another perspective, get them to embrace who they are, what they have. It helps me too, with my own struggles.”

His artistic portfolio expands selectively, each project commissioned by a client seeking art forged with integrity. High turnover in the fashion industry tempts cheap labor and material sourcing. But one of Matthew’s mantras is to “be aligned with the right people in the right place at the right time for the right opportunities.” Matthew interviews each client before they create something together, consciously gauging his visceral instincts—expansion of excitement or contraction of doubt—to decide who to align with.

“At the core of it all, I believe the universe has my back. You have to believe what you cannot see.”

“My price point comes from value—not just from aesthetic perspective, but from what I do to ensure things are produced ethically,” he explains. He plans to keep his process in-house, creating a safe space for artists hired for their specialized skill sets and their passion for their craft. The same hope drives his dream of creating custom prostheses, of being responsible for the fairings that make them beautiful. “Certain wearable art pieces I’ve made are inspiration,” he says, such as the brace he made for a fellow artist friend, as well as the one he himself frequently sports on his right wrist.

All the while, designing exclusive custom pieces presents constant challenges. When the cost of one project blows all the profit from the last, he sits tight and waits for the next. If life imitates art, his personal journeys through epilepsy and hospitalization for mental illness have shown him the refinement of strength.

“I’m doing the best that I can in every moment, and that’s the best that I can do,” he says of the daily battles. “At the core of it all, I believe the universe has my back. You have to believe what you cannot see.” After all, the teenager blasting death metal in Catholic school could not see himself becoming the foreman for sheet metal union workers at age 23; at 23, learning to snap out of trances forewarning seizures, he could not predict someday running his own design brand.

“Be the change you want to see in the world and lead by example,” Matthew sums up. It’s the driver of perseverance. 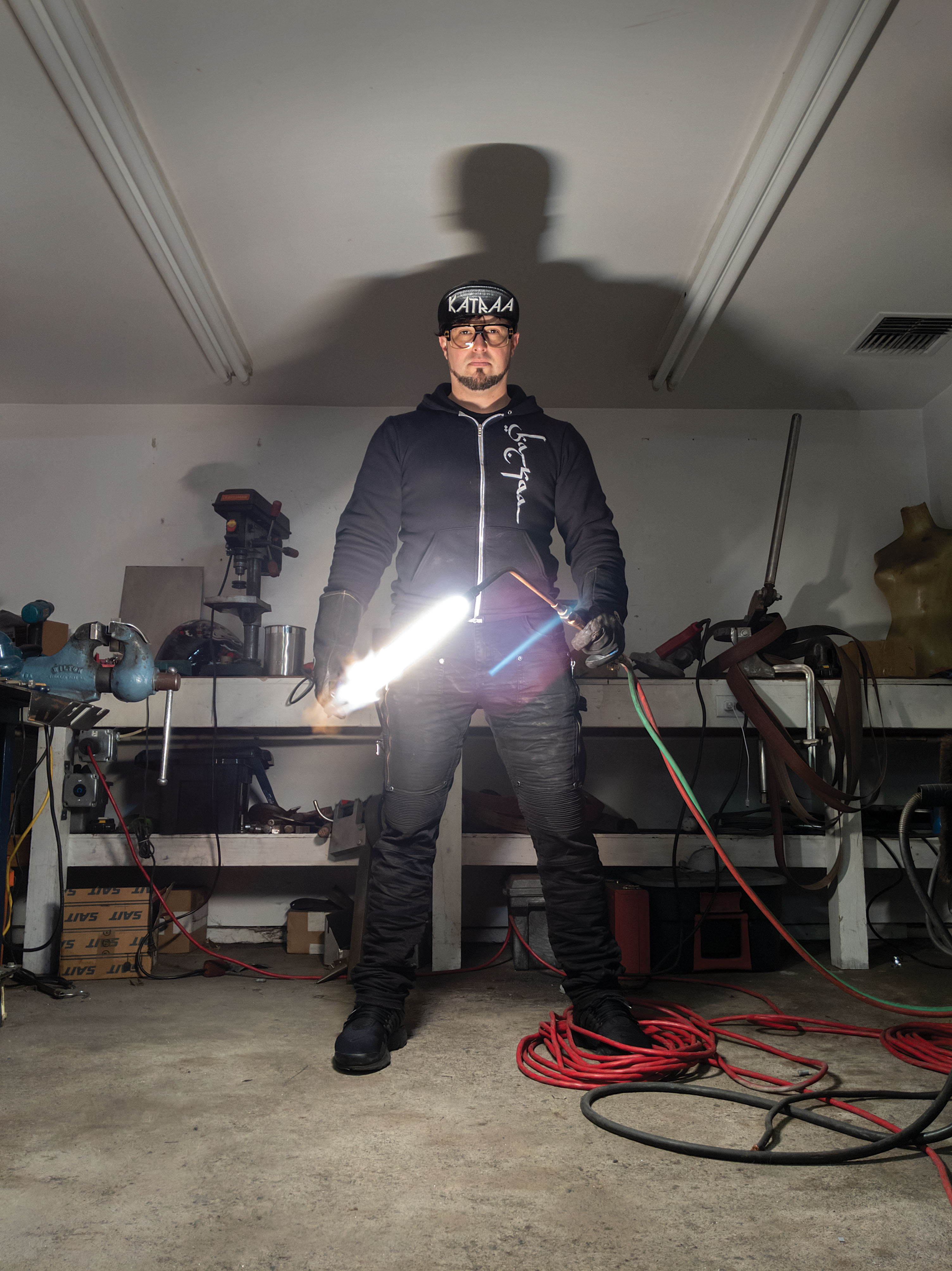