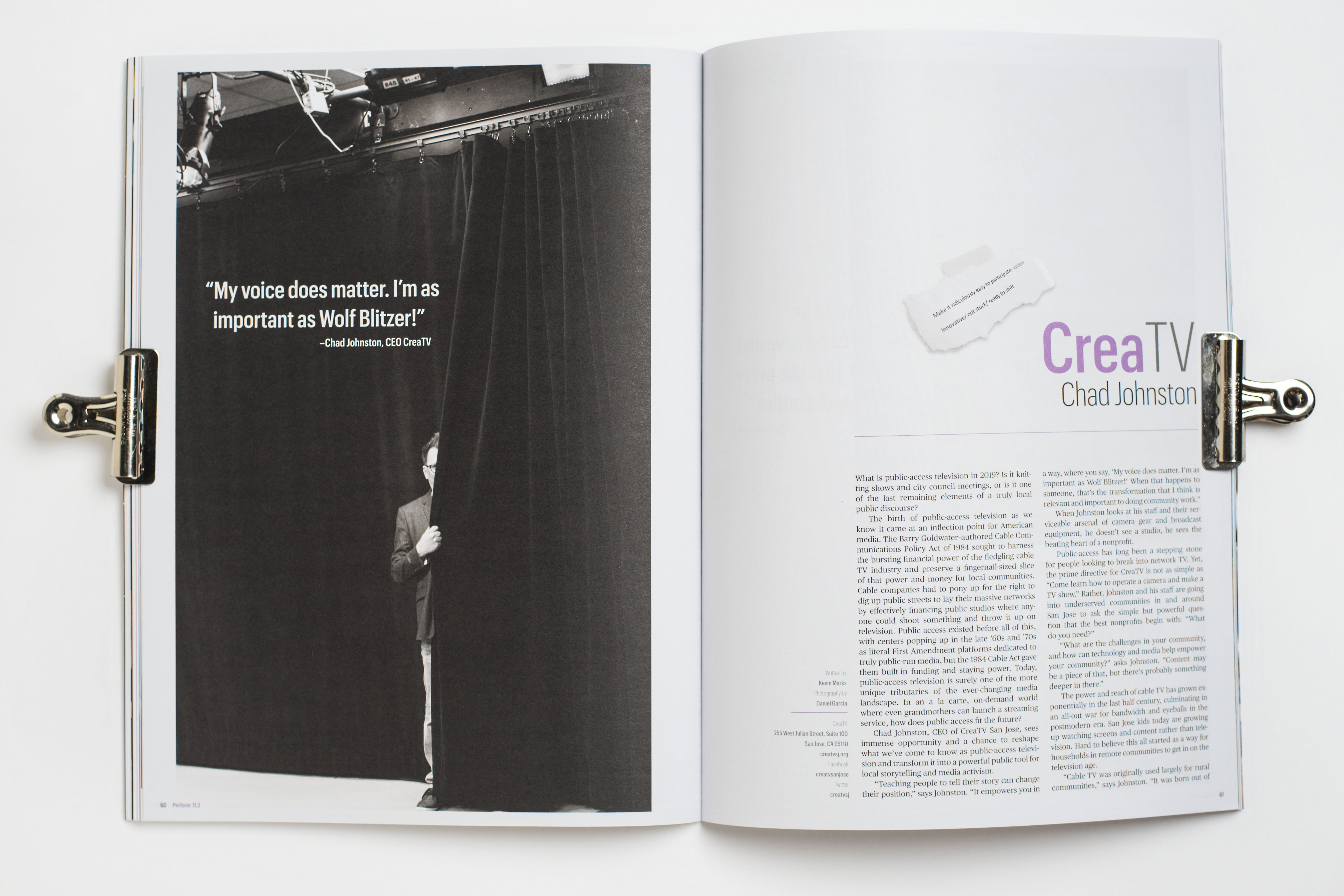 What is Public Access Television in 2019? Is it knitting shows and city council meetings, or is it one of the last remaining fibers of a truly local public discourse?

The Birth of Public Access Television as we know it came at an inflection point for American media. The Barry Goldwater-authored Cable Communications Policy Act of 1984 sought to harness the bursting financial power of the fledgling cable TV industry and preserve a fingernail-sized slice of that power and money for local communities. Cable companies had to pony up for the right to dig up public streets to lay their massive networks by effectively financing public studios where anyone could shoot something and throw it up on television. Public Access existed before all this, with centers popping up in the late 1960s and ’70s as literal First Amendment platforms dedicated to truly public-run media, but the 1984 Cable Act gave them built-in funding and staying power. Today, Public Access Television is surely one of the more unique tributaries of the ever-changing media landscape. In an a-la-carte, on-demand world where even grandmothers can launch a streaming service, how does Public Access fit the future?

Chad Johnston, CEO of CreaTV San Jose, sees immense opportunity, and a chance to reshape what we’ve come to know as Public Access TV, and transform it into a powerful public tool for local storytelling and media activism.

“Teaching people to tell their story can change their position,” says Johnston. “It empowers you in a way, where you say ‘My voice does matter. I’m as important as Wolf Blitzer!’ When that happens to someone, that’s the transformation that I think is relevant and important to doing community work.”

When Johnston looks at his staff and their serviceable arsenal of camera gear and broadcast equipment, he doesn’t see a ‘studio,’ he sees the beating heart of a non-profit.

“Teaching people to tell their story can change their position.”

Public Access has long been a stepping stone for people looking to break into network TV. Yet, the prime directive for CreaTV is not as simple as “Come learn how to operate a camera and make a TV show.” Rather, Johnston and his staff are going into underserved communities in and around San Jose to ask the simple but powerful question that the best non-profits begin with; “What do you need?”

“What are the challenges in your community, and how can technology and media help empower your community?” Johnston asks. “Content may be a piece of that, but there’s probably something deeper in there.”

The power and reach of cable TV has grown exponentially in the last half-century, culminating in an all-out war for bandwidth and eyeballs in the postmodern era. San Jose kids today are growing up watching ‘screens’ and ‘content’ rather than ‘television.’ Hard to believe this all started as a way for households in remote communities to get in on the Television Age.

“Cable TV was originally used largely for rural communities,” says Johnston. “It was born out of the fact that they couldn’t get TV reception in the hollers of Appalachia. Suddenly you had fifteen crystal clear channels and no reception issues.”

Times have changed. In 2018, Comcast alone generated close to $90 billion in revenue.

Johnston grew up making his own media and skateboarding videos by borrowing camera gear from his mother, who worked in Teacher Education at Ohio State. Later he embarked on his current path of digital activism while studying theater and media with a focus on social change at Antioch College in Ohio—a place he describes as “a training ground for activists.” At Antioch, Johnston met Bob Divine, a mentor and professor who championed and opened Public Access TV studios, and viewed them as “electronic greenspaces,” where the community at large could gather, trade ideas, and flex their First Amendment muscles with broadcast technology.

“At some point I realized I couldn’t just be an artist,” says Johnston. “I got nagged enough.” Becoming a responsible artist wasn’t just something his professors taught at Antioch, it became something that Johnston sought to embody, and it informs the vision of CreaTV. In the often anemic, sleepy world of Public Access Television, it just might be the thing that helps CreaTV weather the changing climate of media and thrive in the emerging entertainment landscape.

“I’m always telling our board and others in our field; ‘I don’t know what media is going to be. But what I do know is that if we’re going to play in that space, we have to be really responsive and nimble just like every other media outlet,’” he says. “This is the most exciting and terrifying time to do what we do.”

Johnston and CreaTV are poised to launch their Summer Documentary Institute this year, where young people are invited to tell the stories that matter to them and their communities. Through this and other programs like it, CreaTV looks to cultivate a true Electronic Greenspace for San Jose, and redefine what Public Access Television looks like in the digital years to come.