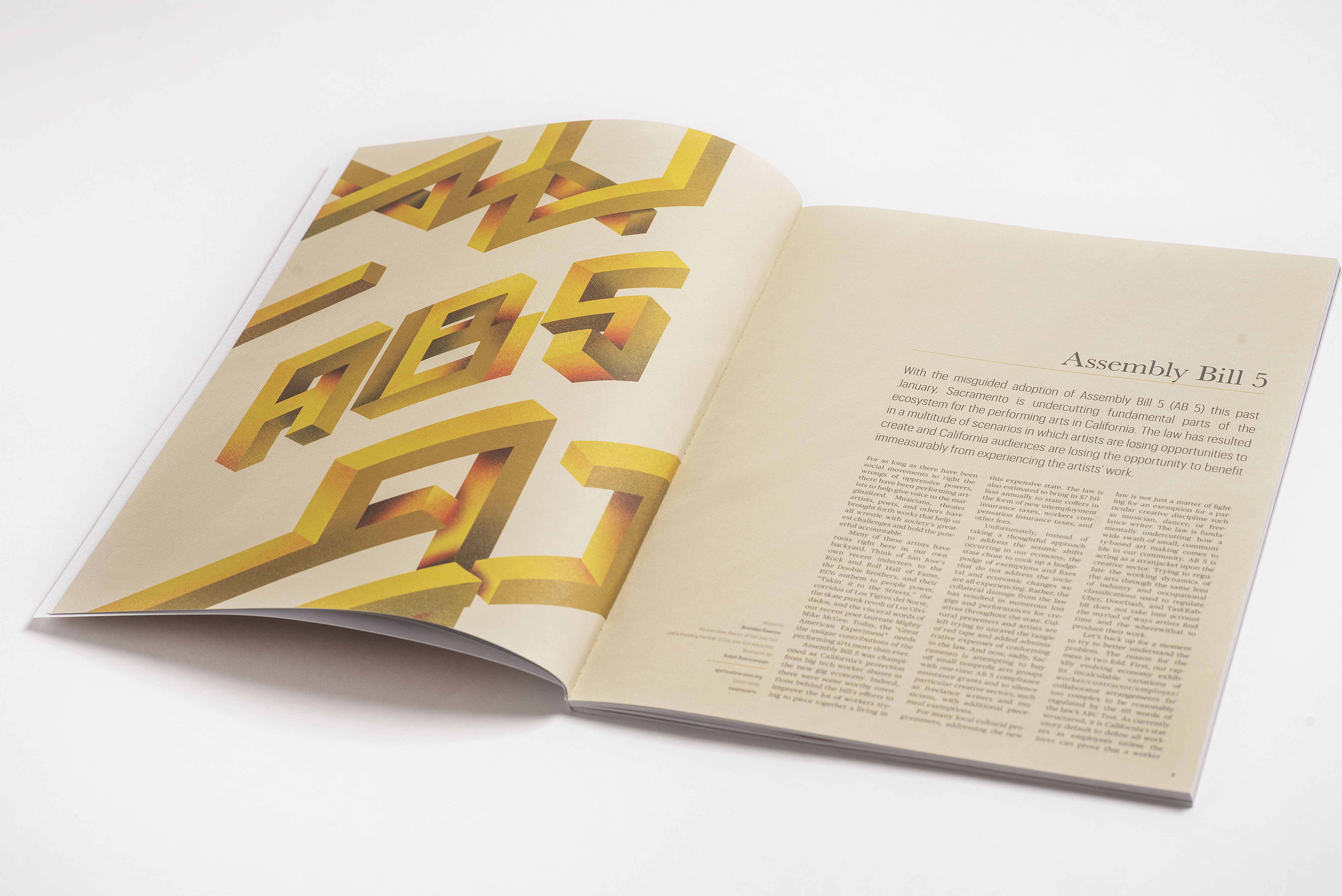 For as long as there have been social movements to right the wrongs of oppressive powers, there have been performing artists to help give voice to the marginalized. Musicians, theater artists, poets, and others have brought forth works that help us all wrestle with society’s greatest challenges and hold the powerful accountable.

Many of these artists have roots right here in our own backyard. Think of San Jose’s own recent inductees to the Rock and Roll Hall of Fame, the Doobie Brothers, and their 1976 anthem to people power, “Takin’ it to the Streets,” the corridos of Los Tigres del Norte, the skate punk revolt of Los Olvidados, and the visceral words of our recent poet laureate Mighty Mike McGee. Today, the “Great American Experiment” needs the unique contributions of the performing arts more than ever.

Assembly Bill 5 was championed as California’s protection from big tech worker abuses in the new gig economy. Indeed, there were some worthy intentions behind the bill’s efforts to improve the lot of workers trying to piece together a living in this expensive state. The law is also estimated to bring in $7 billion annually to state coffers in the form of new unemployment insurance taxes, workers compensation insurance taxes, and other fees.

Unfortunately, instead of taking a thoughtful approach to address the seismic shifts occurring in our economy, the state chose to cook up a hodgepodge of exemptions and fixes that do not address the societal and economic changes we are all experiencing. Rather, the collateral damage from the law has resulted in numerous lost gigs and performances for creatives throughout the state. Cultural presenters and artists are left trying to unravel the tangle of red tape and added administrative expenses of conforming to the law. And now, sadly, Sacramento is attempting to buy off small nonprofit arts groups with one-time AB 5 compliance assistance grants and to silence particular creative sectors, such as freelance writers and musicians, with additional piecemeal exemptions.

For many local cultural programmers, addressing the new law is not just a matter of fighting for an exemption for a particular creative discipline such as musician, dancer, or freelance writer. The law is fundamentally undercutting how a wide swath of small, community-based art making comes to life in our community. AB 5 is acting as a straitjacket upon the creative sector. Trying to regulate the working dynamics of the arts through the same lens of industry and occupational classifications used to regulate Uber, DoorDash, and TaskRabbit does not take into account the myriad of ways artists find time and the wherewithal to produce their work.

Let’s back up for a moment to try to better understand the problem. The reason for the mess is two fold. First, our rapidly evolving economy exhibits incalculable variations of worker/contractor/employer/collaborator arrangements far too complex to be reasonably regulated by the 69 words of the law’s ABC Test. As currently structured, it is California’s statutory default to define all workers as employees unless the hirer can prove that a worker is independent according to the ABC Test. The test establishes that a worker can only be an independent contractor if each of these three factors are met:

B. The worker performs work that is outside the usual course of the hiring entity’s business.

C. The worker is customarily engaged in an independently established trade, occupation, or business of the same nature as the work performed.

For instance, the B portion of the test requires that the service to be performed by a contractor must be “outside the usual course of the hiring entities business.”

This poses numerous conflicts in the cultural programming field. To illustrate, in 2019, San Jose Jazz presented more than 1,000 musicians across 326 different performances. The vast majority were independent musicians and singers from California and around the nation.

For some big-name acts, we contract with their corporate agent and pay the agency for the band’s performance. However, for the vast majority of musicians, we work directly with the bandleader to agree on a price and terms, providing them payment as independent contractors. They, in turn, pay their band members in accordance with IRS Schedule C filing rules.

Under AB 5, we are now required to inform musicians, dancers, spoken-word artists, DJs, and other paid performers that they must now become employees of San Jose Jazz for the length of their performance for our audience, often less than 90 minutes. We are now obligated to devote tremendous time and resources to managing this cumbersome process.

For another example, take the situation of an independent wedding event planner who secures a large wedding gig and wants to contract assistance for the big weekend with additional helpers. Under the ABC Test they will have to hire the assistants as W2 employees. The hirer must set up payroll, pay the state required unemployment insurance taxes, make sure to provide proper workplace accommodations and rest breaks.

Second, our legislators’ myopic worldview tries to force every manner of economic exchange for services through the lens of an employer/employee construct. Our pluralistic society and culture are far more kaleidoscopic than this approach allows for. Numerous areas of our civic and cultural life are being caught up in this mire—freelance journalism, youth sports leagues and camps, community theaters, cultural festivals, music clubs, dance studios, and garage bands, to name just a few. The complete list would be as easy to define as it is to define a labor category for who is and is not a currently exempt “fine artist” under the law.

The sheer might and speed of the California economy is truly staggering. Therefore, ensuring fair competition along with worker and environmental protections is appropriately the concern of Sacramento. However, not all economic and labor relationships are properly understood through a constrictive industry/employee lens. Faith communities, social benefit associations, sporting clubs, avocational affinity groups, worker cooperatives, student internships, craft guilds, and arts organizations all demonstrate labor exchanges and collaborative relationships that don’t fit nicely into AB 5’s world view. For example, in the traditional employer/employee construct, the intellectual properties rights of a new work are owned by the employer, not the artist. As expected, industry sectors with powerful lobbying machines—doctors, lawyers, real estate agents, AAA tow truck drivers—made sure to carve out their exemptions in the original bill. In contrast, those areas of society that did not get a fair shake in the process were the small, the independent, and the marginalized.

Small, independent, and marginalized is also an apt description of Silicon Valley’s cultural sector. According to the recent Silicon Valley Index, the number of nonprofit arts organizations in Santa Clara County has doubled since 2012 to more than 900 groups. This is a very exciting development for our local cultural ecosystem. However, more than half of these culture organizations operate on budgets of less than $100,000. Forcing these organizations, probably more accurately described as community-based culture projects, to take on the same regulatory burden of Lyft and Postmates will only result in the demise of some of our most fledgling and exciting local culture makers.

California’s diverse cultural contributions are recognized around the world. Our residents have brought forth tremendous works that explore the depths of the human condition and help speak truth to power. The arts ecosystem is distinctly different from other sectors in the California economy. California legislators need to step up to protect the arts and artists’ unique role in society. Shamefully, Sacramento is currently dismantling the ecosystem for the performing arts to tackle the important issues of our day. The reality of small theaters canceling seasons and independent music and dance studios closing their doors flies counter to the Sacramento preferred narrative of “heroic lawmakers take on big tech to protect the little guy.” They really should hire a good freelance writer to help them with their flimsy script.