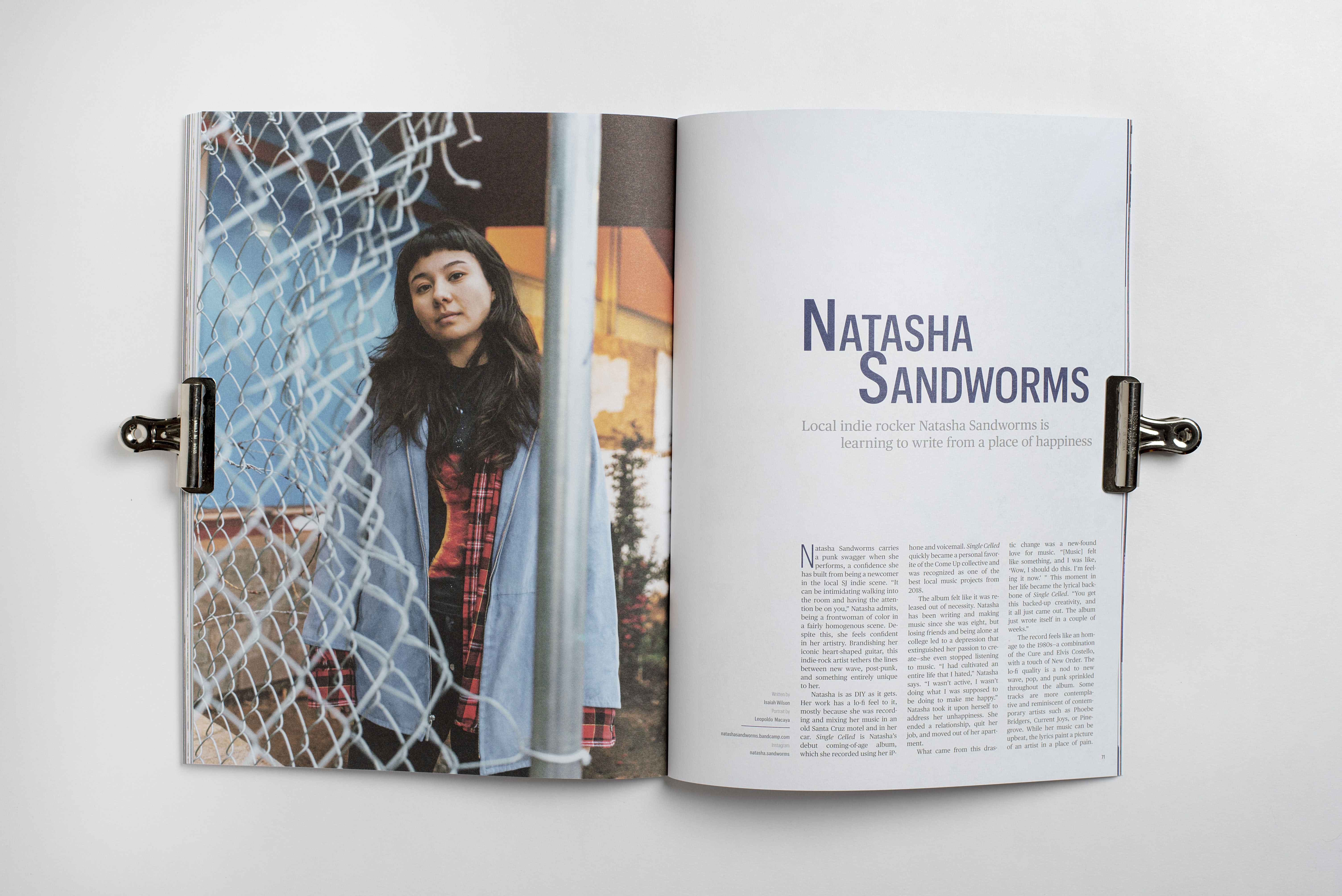 Natasha Sandworms carries a punk swagger when she performs, a confidence she has built from being a newcomer in the local SJ indie scene. “It can be intimidating walking into the room and having the attention be on you,” Natasha admits, being a frontwoman of color in a fairly homogenous scene. Despite this, she feels confident in her artistry. Brandishing her iconic heart-shaped guitar, this indie-rock artist tethers the lines between new wave, post-punk, and something entirely unique to her.

Natasha is as DIY as it gets. Her work has a lo-fi feel to it, mostly because she was recording and mixing her music in an old Santa Cruz motel and in her car. Single Celled is Natasha’s debut coming-of-age album, which she recorded using her iPhone and voicemail. Single Celled quickly became a personal favorite of the Come Up collective and was recognized as one of the best local music projects from 2018.

The album felt like it was released out of necessity. Natasha has been writing and making music since she was eight, but losing friends and being alone at college led to a depression that extinguished her passion to create—she even stopped listening to music. “I had cultivated an entire life that I hated,” Natasha says. “I wasn’t active, I wasn’t doing what I was supposed to be doing to make me happy.” Natasha took it upon herself to address her unhappiness. She ended a relationship, quit her job, and moved out of her apartment.

What came from this drastic change was a new-found love for music. “[Music] felt like something, and I was like, ‘Wow, I should do this. I’m feeling it now.’ ” This moment in her life became the lyrical backbone of Single Celled. “You get this backed-up creativity, and it all just came out. The album just wrote itself in a couple of weeks.”

The record feels like an homage to the 1980s—a combination of the Cure and Elvis Costello, with a touch of New Order. The lo-fi quality is a nod to new wave, pop, and punk sprinkled throughout the album. Some tracks are more contemplative and reminiscent of contemporary artists such as Phoebe Bridgers, Current Joys, or Pinegrove. While her music can be upbeat, the lyrics paint a picture of an artist in a place of pain. “[My music] can vary in genre, but it’s always very emotional,” Natasha assesses. “I only perform four songs off the album, because they are the only ones I’m comfortable performing. There are some songs on there that are painful that I just can’t play in front of people.”

The album takes a mature approach to a breadth of difficult subject matters—depression, love, heartbreak, loneliness, and the shaping of one’s identity. The title track, “Single Celled,” digs into the complicated nature of being true to oneself while feeling alone, which may serve as the theme of the entire project. After releasing the album, Natasha was contacted by her good friend John Carlo, drummer of local act Eastern Westerner and one of the founders of Yeah! Records. Still in the initial phases of creating his label, John Carlo released the album on cassette.

Fresh from a six-month stint living in Thailand, Natasha is adjusting to living in San Jose and writing from a place of contentment and stability. She now has a four-piece band—guitarist Cole Calvo and bassist Will Merveau along with John Carlo as her drummer, seasoned musicians of the local scene who have performed with other Bay Area acts such as Bread Club, Drop In, and Pardoner. She has become more collaborative with her writing process, sharing her rough drafts and recordings with her band. She admits that her previous reticence and reluctance to collaborate came from stubbornness and insecurity, but now she deeply values collaborating. “The experience of playing shows and receiving generally positive feedback makes me more confident,” she says. Natasha is learning that creating in a more positive mindset has its own challenges, but she is willing to take them on.