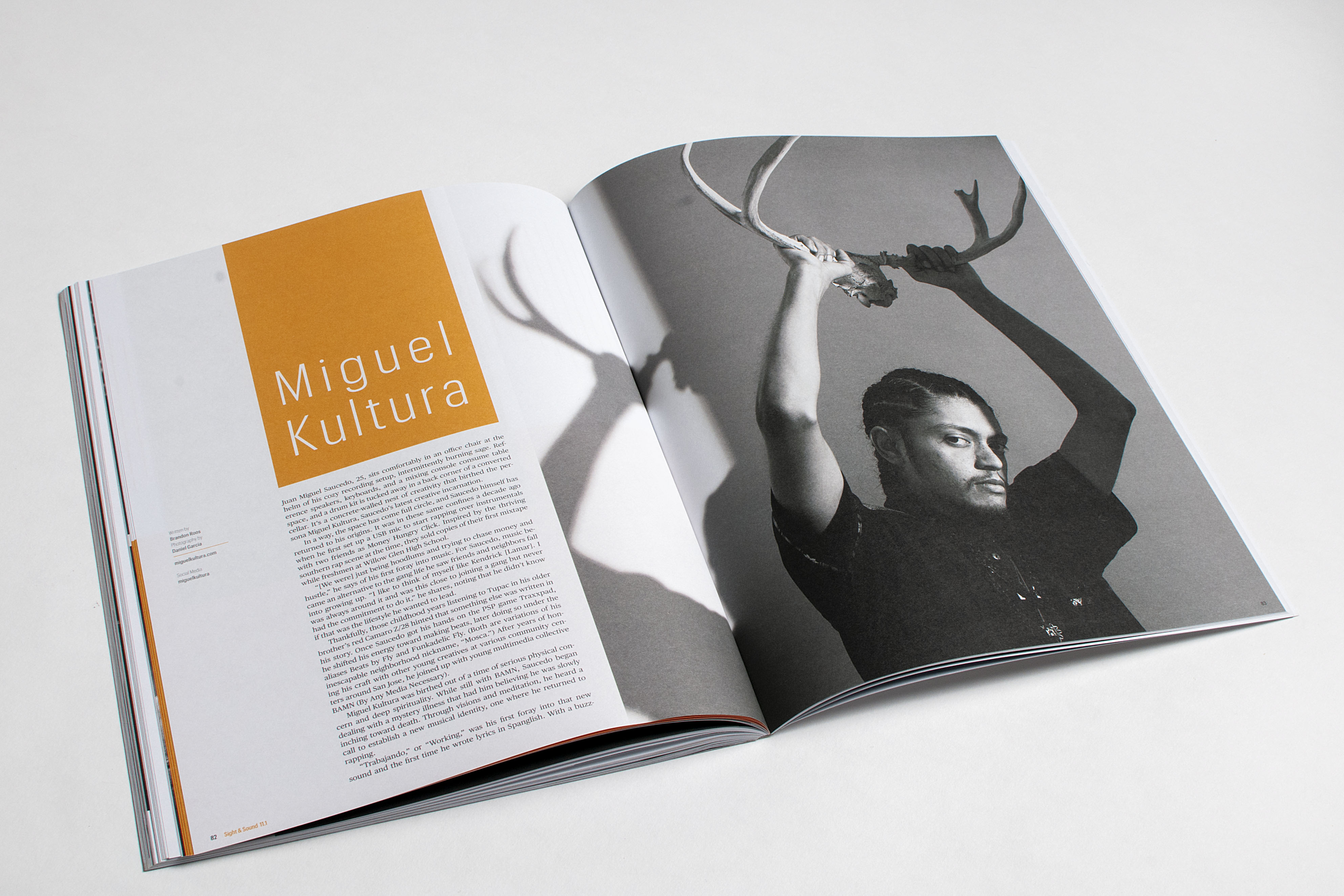 Juan Miguel Saucedo, 25, sits comfortably in an office chair at the helm of his cozy recording setup, intermittently burning sage. Reference speakers, keyboards, and a mixing console consume table space, and a drum kit is tucked away in a back corner of a converted cellar. It’s a concrete-walled nest of creativity that birthed the persona Miguel Kultura, Saucedo’s latest creative incarnation.

In a way, the space has come full circle, and Saucedo himself has returned to his origins. It was in these same confines a decade ago when he first set up a USB mic to start rapping over instrumentals with two friends as Money Hungry Click. Inspired by the thriving southern rap scene at the time, they sold copies of their first mixtape while freshmen at Willow Glen High School.

“[We were] just being hoodlums and trying to chase money and hustle,” he says of his first foray into music. For Saucedo, music became an alternative to the gang life he saw friends and neighbors fall into growing up. “I like to think of myself like Kendrick [Lamar]. I was always around it and was this close to joining a gang but never had the commitment to do it,” he shares, noting that he didn’t know if that was the lifestyle he wanted to lead.

Thankfully, those childhood years listening to Tupac in his older brother’s red Camaro Z/28 hinted that something else was written in his story. Once Saucedo got his hands on the PSP game Traxxpad, he shifted his energy toward making beats, later doing so under the aliases Beats by Fly and Funkadelic Fly. (Both are variations of his inescapable neighborhood nickname, “Mosca.”) After years of honing his craft with other young creatives at various community centers around San Jose, he joined up with young multimedia collective BAMN (By Any Media Necessary).

Miguel Kultura was birthed out of a time of serious physical concern and deep spirituality. While still with BAMN, Saucedo began dealing with a mystery illness that had him believing he was slowly inching toward death. Through visions and meditation, he heard a call to establish a new musical identity, one where he returned to rapping.

“Trabajando,” or “Working,” was his first foray into that new sound and the first time he wrote lyrics in Spanglish. With a buzzing synth and skittering percussion, Saucedo raps about the Latino struggle for visibility and acceptance, with lines like, “My father said we came here to work / Latinos go hard every day in the dirt” and “The son of a farmer can’t be tamed.” He dives more fully into that voice on “Conformar,” similarly Spanglish but more Spanish-forward. The song tackles the notion of conformity. It also alludes to the idea of resilience in the aftermath of losing friends too soon to depression.

“This is what I’m supposed to be doing. It was already written in the stars.”

“As a Mexican-American growing up, you have these two identities,” he points out. “People from Mexico look at you like you’re not one of them, and people here don’t look at you like you’re American either, so it’s always a challenge to be a Mexican American. As I get older, I ask myself, ‘How can I merge these two identities?’ ” By leveraging his proficiency in both languages (he grew up bilingual), Saucedo hopes his work as Miguel Kultura fosters a bridge of connection and understanding across cultural and language barriers.

The journey has also helped him better acknowledge his musical roots outside hip-hop, allowing him to reconnect with the traditional Mexican songs his father taught him on piano as a child and the continued influence of local Norteño music legends Los Tigres del Norte.

A video for “Conformar” is forthcoming, accompanied by a minidocumentary series that shares stories of young local Latinx creatives pushing in their own way to not conform to societal and cultural expectations. In that sense, Saucedo is using his creative work to speak to a greater cultural struggle.

Sometimes, Saucedo speaks about Miguel Kultura in the third person. It seems to be a recognition that his work under this banner doesn’t stem from his creativity alone. Based on all that’s led to this creative moment, Saucedo believes something greater is at play. “It’s not so much about the accolades, the rewards, whatever. This is what I’m supposed to be doing,” he admits, pointing to the significance legacy plays in how he views his work. “It was already written in the stars.”