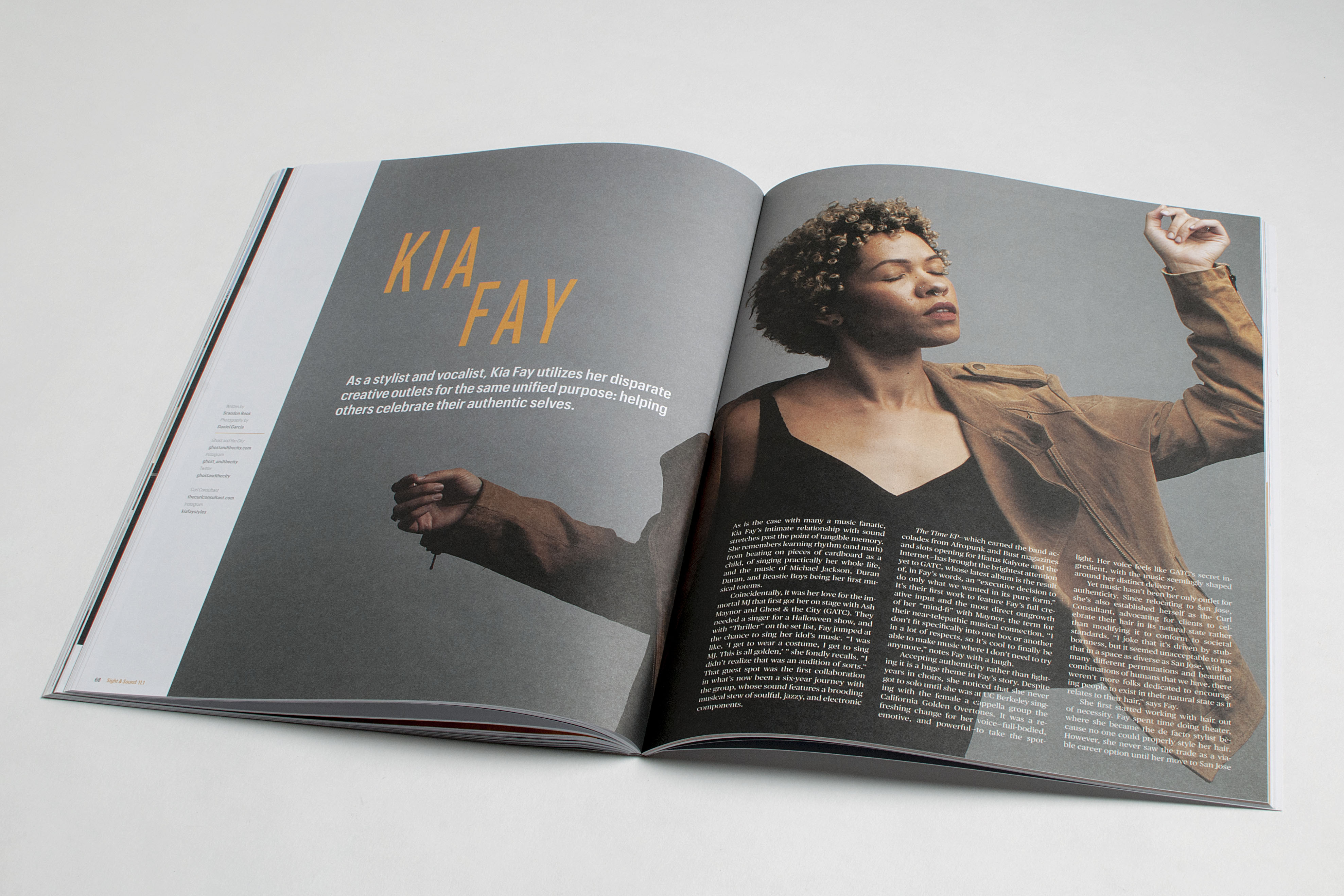 As is the case with many a music fanatic, Kia Fay’s intimate relationship with sound stretches past the point of tangible memory. She remembers learning rhythm (and math) from beating on pieces of cardboard as a child, of singing practically her whole life, and the music of Michael Jackson, Duran Duran, and Beastie Boys being her first musical totems.

Coincidentally, it was her love for the immortal MJ that first got her on stage with Ash Maynor and Ghost & the City (GATC). They needed a singer for a Halloween show, and with “Thriller” on the set list, Fay jumped at the chance to sing her idol’s music. “I was like, ‘I get to wear a costume, I get to sing MJ. This is all golden,’ ” she fondly recalls. “I didn’t realize that was an audition of sorts.” That guest spot was the first collaboration in what’s now been a six-year journey with the group, whose sound features a brooding musical stew of soulful, jazzy, and electronic components.

The Time EP—which earned the band accolades from Afropunk and Bust magazines and slots opening for Hiatus Kaiyote and the Internet, has brought the brightest attention yet to GATC, whose latest album is the result of, in Fay’s words, an “executive decision to do only what we wanted in its pure form.” It’s their first work to feature Fay’s full creative input and the most direct outgrowth of her “mind-fi” with Maynor, the term for their near-telepathic musical connection. “I don’t fit specifically into one box or another in a lot of respects, so it’s cool to finally be able to make music where I don’t need to try to anymore,” notes Fay with a laugh.

Accepting authenticity rather than fighting it is a huge theme in Fay’s story. Despite years in choirs, she noticed that she never got to solo until she was at UC Berkeley singing with the female a cappella group the California Golden Overtones. It was a refreshing change for her voice—full-bodied, emotive, and powerful—to take the spotlight. Her voice feels like GATC’s secret ingredient, with the music seemingly shaped around her distinct delivery.

Yet music hasn’t been her only outlet for authenticity. Since relocating to San Jose, she’s also established herself as the Curl Consultant, advocating for clients to celebrate their hair in its natural state rather than modifying it to conform to societal standards. “I joke that it’s driven by stubbornness, but it seemed unacceptable to me that in a space as diverse as San Jose, with as many different permutations and beautiful combinations of humans that we have, there weren’t more folks dedicated to encouraging people to exist in their natural state as it relates to their hair,” says Fay.

“I don’t fit specifically into one box or another in a lot of respects, so it’s cool to finally be able to make music where I don’t need to try to anymore.”

She first started working with hair out of necessity. Fay spent time doing theater, where she became the de facto stylist because no one could properly style her hair. However, she never saw the trade as a viable career option until her move to San Jose propelled her to be the change and to establish a space the city desperately needed. “The bulk of the feedback I’ve received has been that the work I do is liberating,” admits Fay. “That’s the best-case scenario for me: freeing anybody from a restriction they thought they had that was only an artificial restriction. Hopefully I can plant that seed for other folks, and they in turn will stand as beacons wherever they are.”

As a person of mixed descent who struggled over the years with where she fit in, Fay’s now using her two creative pursuits to help others recognize and celebrate their own unique tastes and identities through communion and connection. “We have to stop being so wedded to [the idea that] ‘This is what beauty looks like. This is what music looks like,’ and just accept beauty when we see it and hopefully foster what comes naturally to people and stop encouraging them to resist their more authentic selves, in any capacity,” she says.

Chekc out Ghost & the Ctiy's Music on Spotify