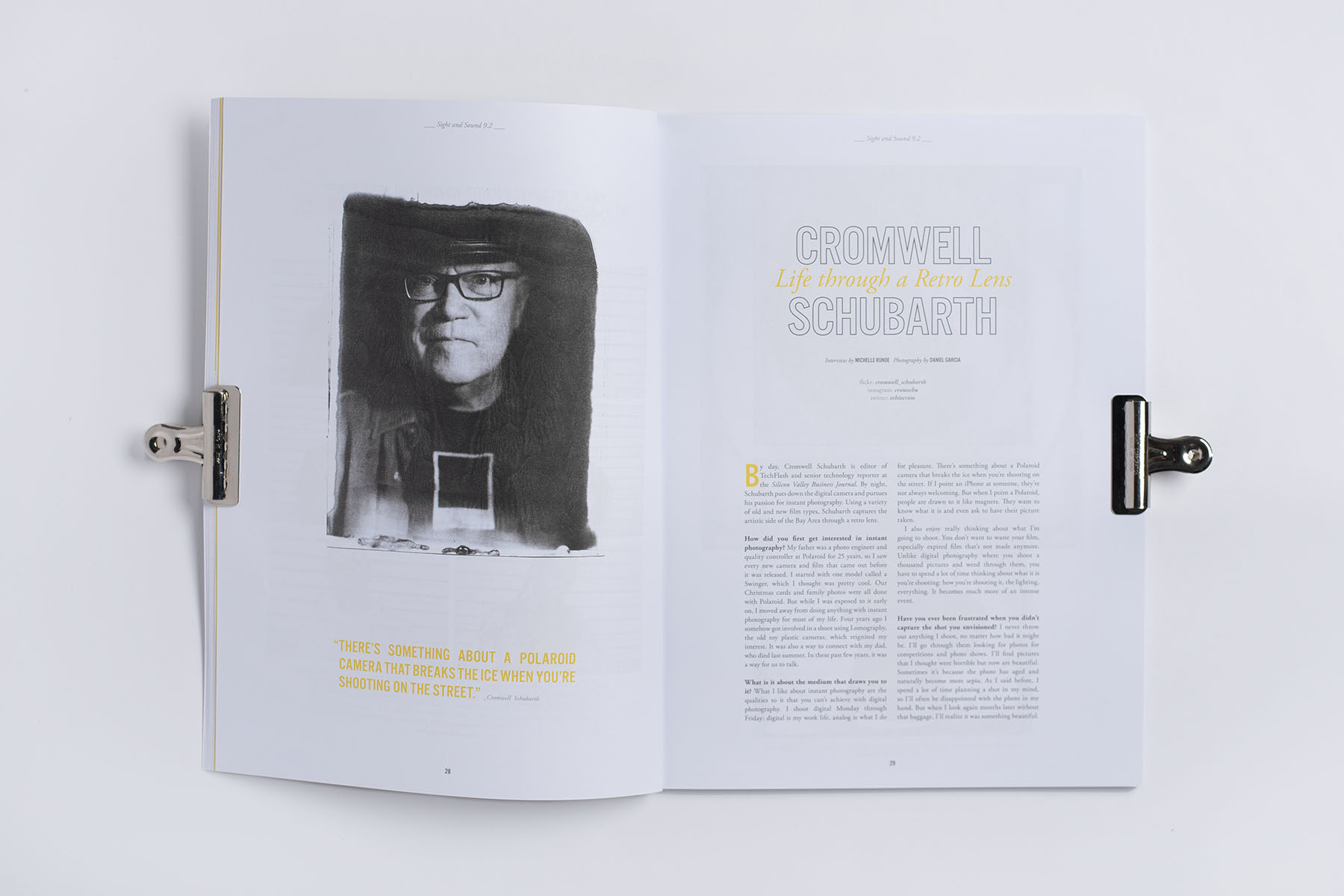 By day, Cromwell Schubarth is editor of TechFlash and senior technology reporter at the Silicon Valley Business Journal. By night, Schubarth puts down the digital camera and pursues his passion for instant photography. Using a variety of old and new film types, Schubarth captures the artistic side of the Bay Area through a retro lens.

How did you first get interested in instant photography? My father was a photo engineer and quality controller at Polaroid for 25 years, so I saw every new camera and film that came out before it was released. I started with one model called a Swinger, which I thought was pretty cool. Our Christmas cards and family photos were all done with Polaroid. But while I was exposed to it early on, I moved away from doing anything with instant photography for most of my life. Four years ago I somehow got involved in a shoot using Lomography, the old toy plastic cameras, which reignited my interest. It was also a way to connect with my dad, who died last summer. In these past few years, it was a way for us to talk.

What is it about the medium that draws you to it? What I like about instant photography are the qualities to it that you can’t achieve with digital photography. I shoot digital Monday through Friday: digital is my work life, analog is what I do for pleasure. There’s something about a Polaroid camera that breaks the ice when you’re shooting on the street. If I point an iPhone at someone, they’re not always welcoming. But when I point a Polaroid, people are drawn to it like magnets. They want to know what it is and even ask to have their picture taken.

“There’s something about a Polaroid camera that breaks the ice when you’re shooting on the street.” _Cromwell  Schubarth

I also enjoy really thinking about what I’m going to shoot. You don’t want to waste your film, especially expired film that’s not made anymore. Unlike digital photography where you shoot a thousand pictures and weed through them, you have to spend a lot of time thinking about what it is you’re shooting: how you’re shooting it, the lighting, everything. It becomes much more of an intense event.

Have you ever been frustrated when you didn’t capture the shot you envisioned? I never throw out anything I shoot, no matter how bad it might be. I’ll go through them looking for photos for competitions and photo shows. I’ll find pictures that I thought were horrible but now are beautiful. Sometimes it’s because the photo has aged and naturally become more sepia. As I said before, I spend a lot of time planning a shot in my mind, so I’ll often be disappointed with the photo in my hand. But when I look again months later without that baggage, I’ll realize it was something beautiful.

Your work seems to focus on both people and places... I have a deep fascination with people, particularly artists. Many of the people I photograph are creative types: artists, models, and other photographers. I see them at SubZERO in San Jose, and festivals in San Francisco and Oakland. I get an energy and vibe that makes them fun to shoot. I’ve always been fascinated with shooting abandoned places: if I can get into old buildings for a shot, it’s fantastic.

Are you more influenced by the subject of your work, or the medium? I spend a lot time trying to match the film with the subject. Often I’ll lug three different cameras and multiple film types to see what I’ll use. One project I’ve developed is shooting the San Jose’s Day of the Dead festival in October. This event is special because I shoot with a rare film called Chocolate, a special type of Polaroid film that creates a chocolate brown image, cooler in tone than sepia. Ever since I did the first shoot four years ago, friends who saw my work have given me Chocolate film to use for this project. At some point, I’d like to turn it into a zine or a show.

What are you working on this year? I’m focusing on new projects for the 12:12 Men group, an invitation-only international art collective where twelve men from around the world pick a new theme for each month to shoot. This year, we also have to do something “new” each time we shoot: a new technique, a different approach, etc. So I’m looking forward to that challenge.