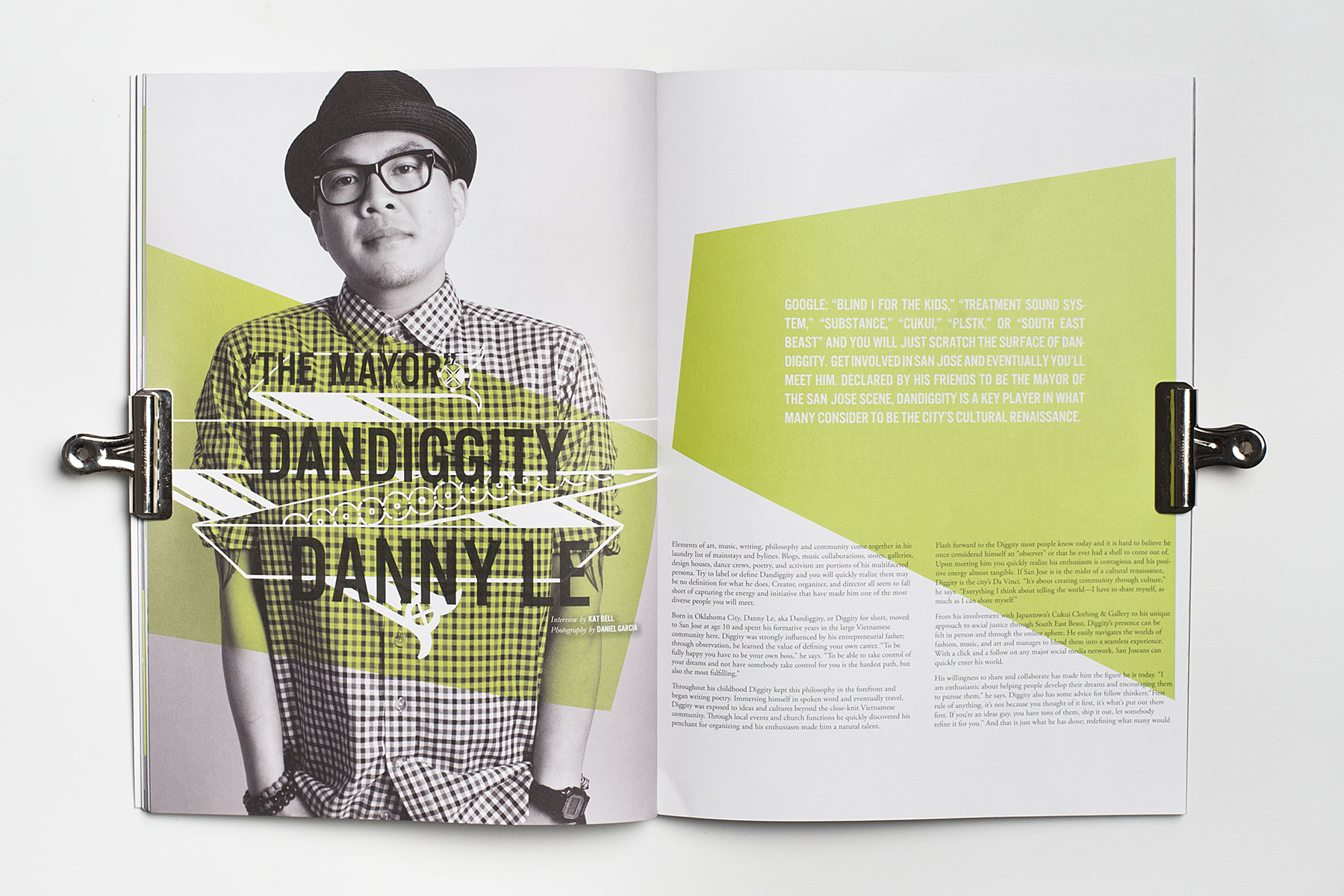 Google: “Blind I for the Kids,” “Treatment Sound System,” “Substance,” “Cukui,” “PLSTK,” or “South East Beast” and you will just scratch the surface of Dandiggity.  Get involved in San Jose and eventually you’ll meet him. Declared by his friends to be the Mayor of the San Jose scene, Dandiggity is a key player in what many consider to be the city’s cultural renaissance.

Elements of art, music, writing, philosophy and community come together in his laundry list of mainstays and bylines. Blogs, music collaborations, stores, galleries, design houses, dance crews, poetry, and activism are portions of his multifaceted persona. Try to label or define Dandiggity and you will quickly realize there may be no definition for what he does. Creator, organizer, and director all seem to fall short of capturing the energy and initiative that have made him one of the most diverse people you will meet.

Born in Oklahoma City, Danny Le, aka Dandiggity, or Diggity for short, moved to San Jose at age 10 and spent his formative years in the large Vietnamese community here. Diggity was strongly influenced by his entrepreneurial father; through observation, he learned the value of defining your own career. “To be fully happy you have to be your own boss,” he says. “To be able to take control of your dreams and not have somebody take control for you is the hardest path, but also the most fulfilling.”

Throughout his childhood Diggity kept this philosophy in the forefront and began writing poetry. Immersing himself in spoken word and eventually travel, Diggity was exposed to ideas and cultures beyond the close-knit Vietnamese community. Through local events and church functions he quickly discovered his penchant for organizing and his enthusiasm made him a natural talent.

Flash forward to the Diggity most people know today and it is hard to believe he once considered himself an “observer” or that he ever had a shell to come out of. Upon meeting him you quickly realize his enthusiasm is contagious and his positive energy almost tangible. If San Jose is in the midst of a cultural renaissance, Diggity is the city’s Da Vinci. “It’s about creating community through culture,” he says. “Everything I think about telling the world—I have to share myself, as much as I can share myself.”

From his involvement with Japantown’s Cukui Clothing & Gallery to his unique approach to social justice through South East Beast, Diggity’s presence can be felt in person and through the online sphere. He easily navigates the worlds of fashion, music, and art and manages to blend them into a seamless experience. With a click and a follow on any major social media network, San Joseans can quickly enter his world.

His willingness to share and collaborate has made him the figure he is today. “I am enthusiastic about helping people develop their dreams and encouraging them to pursue them,” he says. Diggity also has some advice for fellow thinkers:“First rule of anything, it’s not because you thought of it first, it’s what’s put out there first. If you’re an ideas guy, you have tons of them, ship it out, let somebody refine it for you.” And that is just what he has done; redefining what many would consider the traditional model of success: owning and running one company. Instead, Diggity has collaborated to create a diverse portfolio of talents and pursuits.

“The forces of the world tell us that you have to be in a cush job with security, you have to pay off this debt. I say this: be healthy, be aware, be out there, be involved. You will always be happy and you will always have enough.” -  Danny Le

So what is next in his journey? “Lately, I have been learning to take on less; as someone who loves to be involved, you can wear yourself thin,” he says. “In 2012 I told myself: teach yourself to say no.” Dandiggity isn’t taking a break. Rather, he is taking the time to gain focus and turn his attention to the projects he is the most passionate about.

“San Jose is experiencing a renaissance,” Diggity says. “We are on this threshold. Most people don’t see it, because usually they see it after the fact, but we’re not at the end, we are still at the beginning.”

“I am excited because people are a catalyst for other people, it’s like a virus. People see things they want to do and be involved in.” On his friends and fans dubbing him the “Mayor of San Jose,” Diggity laughs. “I believe everyone can be mayor of San Jose, or mayor of their town,” he says. “You just have to support one another. Don’t make excuses. Just go. You’ll have much more fun, and you’ll run into people everywhere.” 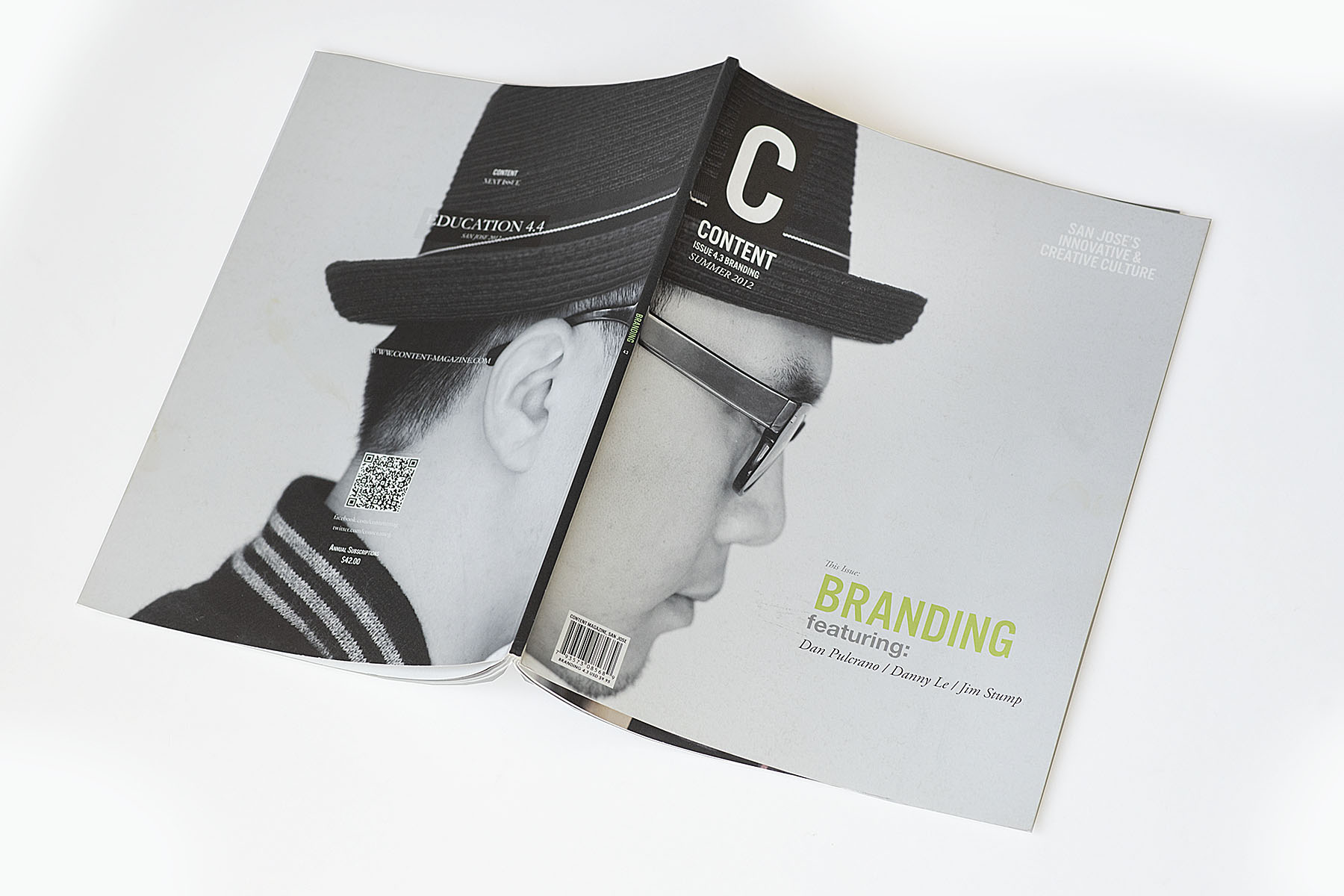