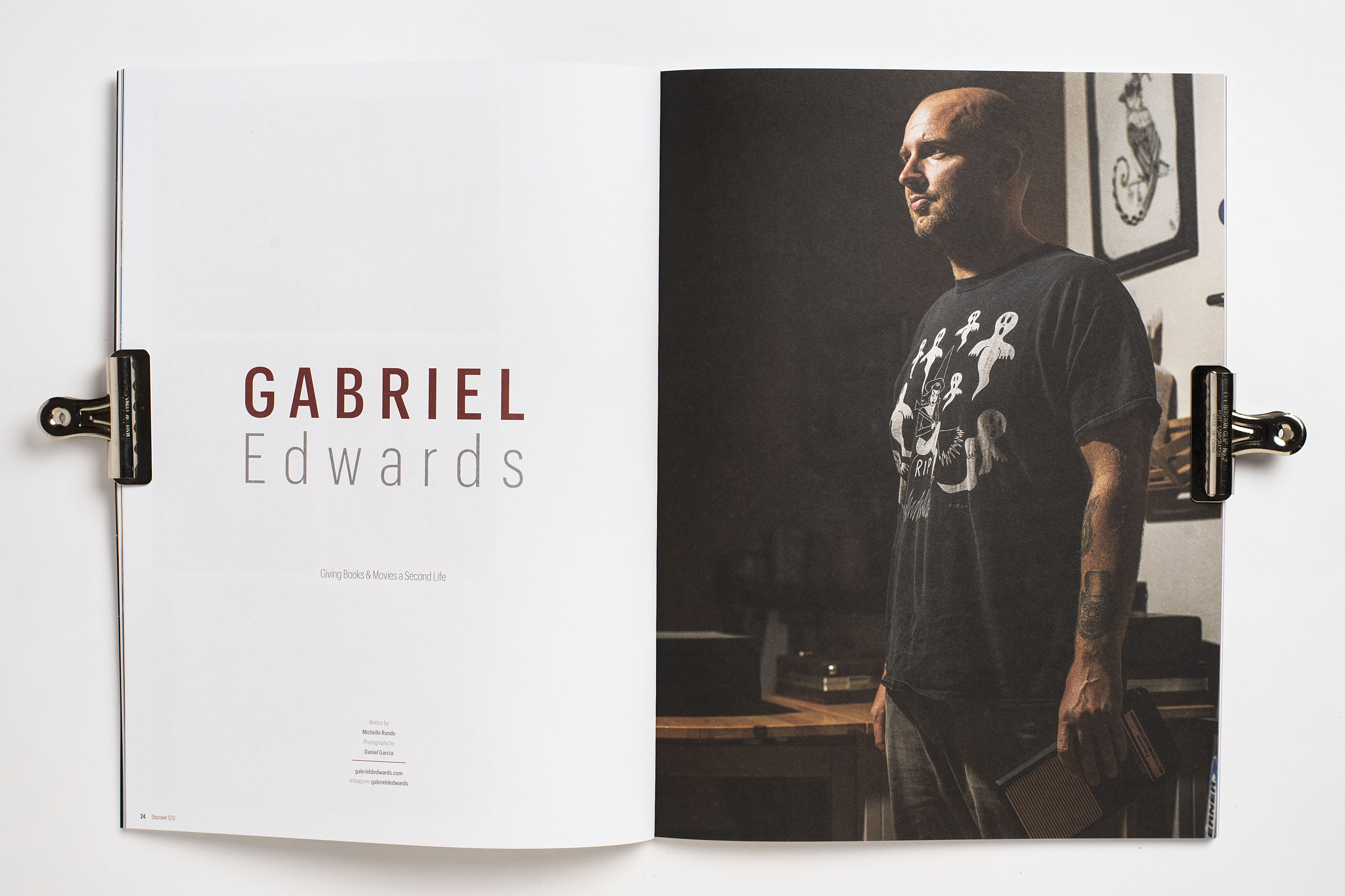 Gabriel Edwards, who goes by Gabe, is a full-time artist and dad, living with his wife and daughter in San Jose, and with a son on the way. Over the past six years, Gabe has been working on two large, ongoing projects: drawing collages of objects from horror films using a style called “knolling,” where the artist arranges various objects in parallel with each other on paper, and recording his own audiobooks on cassette. At their core, both projects are about transforming content from one medium into another, with Gabe putting his own interpretive twist on the original book or movie.

Gabe graduated from the San Francisco Art Institute with a master of fine arts in painting. It was there that he created some of his earliest collages and audiobooks, starting with self-recorded audiobooks complete with hand-drawn cover art for each cassette. It started when he decided to record Jonathan Livingston Seagull, by Richard Bach, on cassette. He then drew reproductions of the book’s cover art for the cassette case cover in black pen. Gabe realized that he’d really enjoyed the process, and he wanted to keep doing it. “In grad school, there was a guy that started making ceramic masks in the seventies, and because he had a group of collectors, whether he loved it or hated it, for the sake of the collectors, he still had to make them,” said Gabe. “So I thought, maybe if that’s what being an artist really looks like, what’s a project I can do that I’ll be glad to keep doing? I really wanted to just read books and be really well-read; that
sounded awesome.”

Hundreds of recording hours after that moment, Gabe has an honest perspective on reading: “I don’t like reading books so much as I like having read them. And maybe that doesn’t make me a true reader. I know people who for fun will curl up all day with a book. For me, it’s like, ‘Gotta go to work now; gotta spend an hour reading this.’” Gabe has completed 85 books on tape, though with a new baby coming, he plans to tackle shorter books next year.

As with his audiobooks, the first inspiration for drawing the horror film object collages came in grad school. “The film drawings are part of my compulsive list making,” said Gabe. “The first time I did this in grad school, some money was supposed to come to me, but it hadn’t yet. And I was making a list on my wall in my studio of things I wanted to buy once that money came in. And then I started to make a list and draw all the things I’d regretted buying.” A few years later, Gabe started drawing objects from horror movies using knolling. “When I started making these, I got about 10 deep, and then I thought, ‘Well how many more of these am I gonna make?’ I think numbers are important, so it was either going to be 13 or 666, and since 13 wasn’t enough, 666 it was,” said Gabe. He’s completed 134 horror film drawings so far, which he’s sold at various events and zine festivals along the West Coast.

To make these, Gabe takes notes on key objects that appear in a film, such as the hockey mask in Friday the 13th.  Using pen and marker, he then draws a collage of the items to represent the movie as a whole. He deliberately does not include the name of the movie, leaving it for the viewer to deduce on their own. Having completed 134 horror film drawings so far, Gabe plans to create one single printed collection when
he’s finished.

Gabe brings an original touch to interpreting movies and literature. It’s rare to find an artist who finds new ways to pay homage to someone else’s art, but Gabe has achieved that with his work. While he’s exploring future shows in galleries along the West Coast, Gabe’s main focus is to keep creating new audiobooks and knolling drawings and to prepare for the newest member of his family.