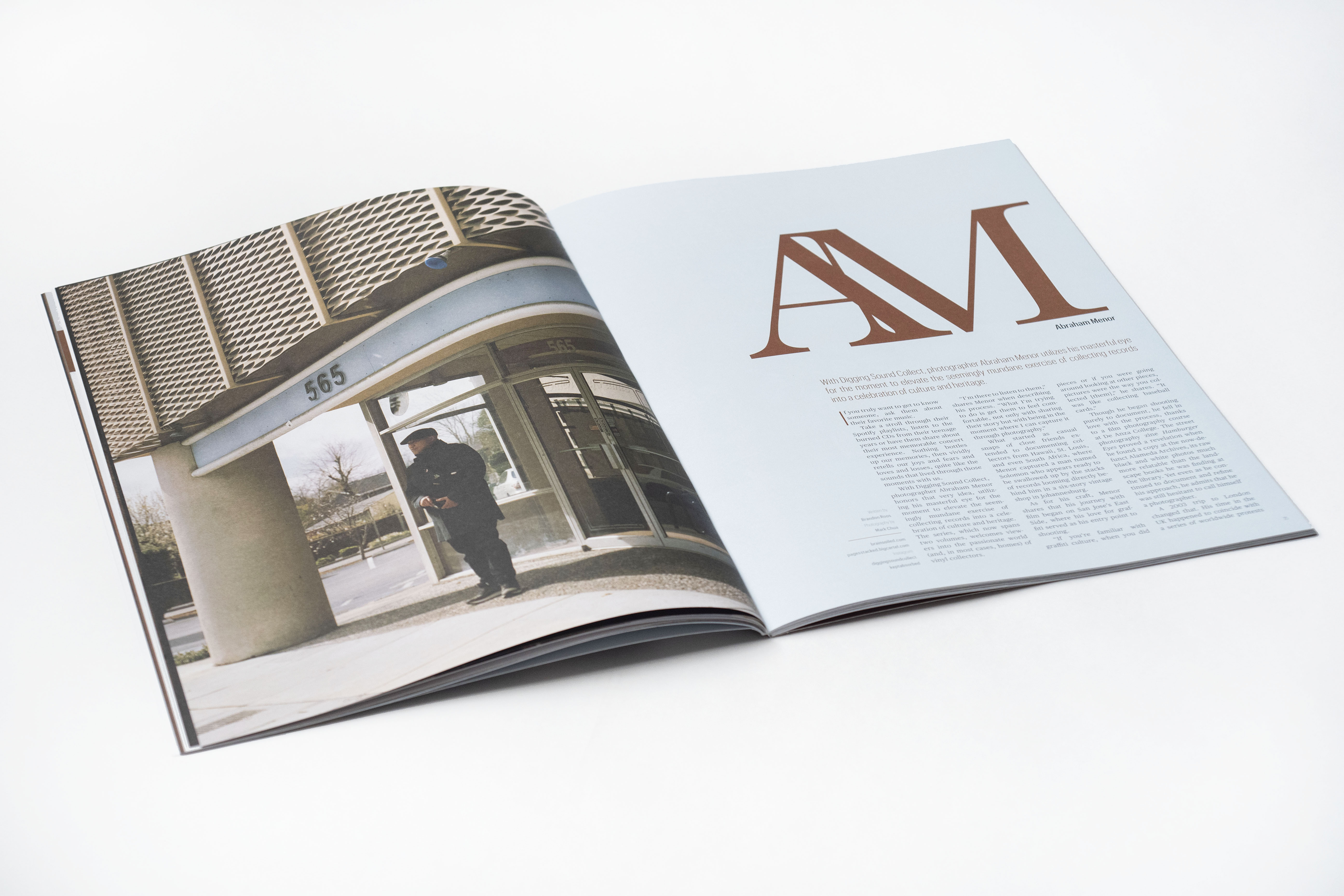 I f you truly want to get to know someone, ask them about their favorite music.

Take a stroll through their Spotify playlists, listen to the burned CDs from their teenage years or have them share about their most memorable concert experience. Nothing bottles up our memories, then vividly retells our joys and fears and loves and losses, quite like the sounds that lived through those moments with us.

With Digging Sound Collect, photographer Abraham Menor honors that very idea, utilizing his masterful eye for the moment to elevate the seemingly mundane exercise of collecting records into a celebration of culture and heritage. The series, which now spans two volumes, welcomes viewers into the passionate world (and, in most cases, homes) ofvinyl collectors.

“I’m there to listen to them,” shares Menor when describing his process. “What I’m trying to do is get them to feel comfortable, not only with sharing their story but with being in the moment where I can capture it through photography.”

What started as casual snaps of close friends extended to documenting collectors from Hawaii, St. Louis, and even South Africa, where Menor captured a man named Solomon who appears ready to be swallowed up by the stacks of records looming directly behind him in a six-story vintage shop in Johannesburg.

As for his craft, Menor shares that his journey with film began on San Jose’s East Side, where his love for graffiti served as his entry point to shooting.

“If you’re familiar with graffiti culture, when you did pieces or if you were going around looking at other pieces, pictures were the way you collected [them],” he shares. “It was like collecting baseball cards.”

Though he began shooting purely to document, he fell in love with the process, thanks to a film photography course at De Anza College. The street photography zine Hamburger Eyes proved a revelation when he found a copy at the now-defunct Alameda Archives, its raw black and white photos much more relatable than the landscape books he was finding at the library. Yet even as he continued to document and refine his approach, he admits that he was still hesitant to call himself a photographer.

A 2003 trip to London changed that. His time in the UK happened to coincide with a series of worldwide protests in opposition to the pending Iraq War. He captured the massive demonstration, shooting so much film that he had to ask strangers for more cash to buy extra rolls. When he showed his friends the results, they
were amazed.

“I come from an old school background,” he explains. “You’ve got to put in the work and gain the notoriety and respect from those who came before.” Armed with the validation he’d long been looking for, he finally stamped himself a photographer.

His studies in sociology first educated him about issues of social justice. It’s a topic that continues to be a through-line for much of his visual work. Last year, he released “San Jose Uprising,” which provided an up-close look at San Jose’s summer 2020 protests in the wake of the police killings of George Floyd and
Breonna Taylor.

Compared to his work documenting protest, Digging Sound Collect is much more subtle, with his subjects proudly displaying their most treasured finds. The series also works to show the diversity of the record digging community. While San Jose’s native son Peanut Butter Wolf may be casually looking back at the camera in front of a wall full of vinyl, Melissa Dueñas, co-founder of the weekly radio show Lowrider Sundays, is seen sorting through a small collection of prized LPs in record cubes near her bed while a 45 sets the mid-day soundtrack.

“I was intentional not to say I want the biggest record collectors,” he points out, stressing that the series is more about capturing a passion for music than displaying the breadth of someone’s collection. “I don’t care if you’ve only got a crate or if you’ve got ten thousand [records].” To him, a respect for the tradition and an appreciation for the music they collect is all someone needs to qualify.

While COVID paused his initial volume two timeline, forcing him to scrap planned trips to Washington DC, Chicago, and the Philippines, he was able to keep shooting in a limited capacity with those who were okay with him filming as he took all proper precautions. He was finally able to release his follow-up in early 2021.

As he writes in the foreword to his latest volume, “I don’t know how many records I listened to and how many new discoveries have been added to my own collection or that are permanently engrained in the playlist in my head, but I do know that I did my best to share what I was able to capture through my camera.”